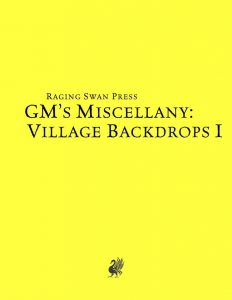 This compilation of Raging Swan Press’ critically-acclaimed and well-received Village Backdrop-series is a massive 89 pages long, 1 page front cover, 2 pages of advertisement, 2 pages of editorial/foreword, 1 page ToC, 1 page SRD and 1 page back cover, leaving us with 81 pages of content – so let’s get this on, shall we?

Okay, first things first: This is NOT the same book as Village Backdrops I for Pathfinder! Instead, we have a different compilation on our hands. This is evident pretty much from the get-go, with a different page-count – but also with a slightly different organization and villages featured. The book, for example, begins with a brief chapter that should provide a helpful guide for GMs and prospective designers alike to make compelling villages, going through the process step by step, often with random tables to roll for sample names, general events to flesh out, etc. More importantly, the book notes important aspects from industry to history to contemplate and can help a GM keep his/her focus while designing. From basics like conflicts, flavor etc. to tables to determine government, alignment, prominent features, industry, population, notable buildings, conflicts and secrets, to 100 sample village names, 20 generic events and even 20 traditions, we essentially get all the tools to create iconic villages on the fly. This section really helps cutting down preparation/design-time, so kudos!

Now, there are some old acquaintances from the PFRPG book in this one: Plague-riddled Ashford, for example – ravaged by the bubonic plague, it is not a nice place to visit and its depiction is nice…and in the system-neutral iteration, I can’t well complain about a lack of bubonic plague stats, now, can I? However, there is another aspect worth mentioning for OSR-purists: The respective fluff-only NPC-write-ups, designed to give you a general inkling of the power-level of the respective beings, do use e.g. “wizard” or “rogue” as the classes referenced – while most GMs/referees won’t mind, some may be annoyed by not using “magic-user” and “thief”, respectively. This may be cosmetic, but it is an instant where the pdf is inconsistent with itself – some entries do use “thief” instead, though “magic-user” is nowhere to be found herein.

Thornhill, White Moon Cove and Longbridge make for other villages that are shared by the 5e and PFRPG-iteration. Beyond these, however, other villages that have since been released for 5e have been included, like the really atmospheric Wellswood, with its easy access to the lightless realms…

From there, we move on to Black Wyvern (which is easily the most boring of Raging Swan’s pirate-centric villages, alas) and then to the aptly-named, amazing Bleakflat. Coldwater, with its weird, deformed populace and evocative Kingsfell. Lanthorn, with its eponymous magical lights can also be found – and would be as well a place as any to note that, while it does sport a market place section, not all villages have one. Similarly, the magical lanterns that lend this place its unique flair could have used some mechanics or at least guidelines, as far as I’m concerned – the conversion of the crunchier bits falls by the wayside here and there…though e.g. the magical drugs in Suurin are properly covered and get some neat OSR-rules. Extra-kudos there!

Even then, the pdf has some real gems to offer – like Mike Welham’s rather amazing village of kinda friendly undead…oh, yeah, there’s this nasty curse-thingy going on…never mind that, all right? 😉 Kidding aside, oddly, this one doesn’t get a marketplace section either. If you require a more in-depth break-down of the villages in question, please consult my individual reviews for their installments.

Editing and formatting are very good – I noticed no undue accumulation of hiccups. Layout adheres to a neat two-column b/w-standard that is easy on the eyes and printer-friendly. The pdf sports an impressive array of great b/w-artwork and the cartography provided for the respective villages is amazing. As a pdf, the book comes in two versions, with one being particularly printer-friendly and one optimized for screen-use. The pdfs come fully bookmarked for your convenience. I cannot comment on the print version, since I do not own it.

Creighton Broadhurst, Richard Green, Marc Radle, Jeff Gomez and Mike Welham are all talented writers – that much is evident at first glance when reading the intriguing villages collected in this compilation. The villages, in short, adhere to Raging Swan Press’s high quality standards and all have several unique angles to use in the game. The system neutral version has the advantage of me not being able to criticize inconsistencies among marketplace sections and lack of crunchy bits, sure – but the minor nomenclature inconsistencies, already present in the constituent files, could easily have been purged or at least unified.

Don’t get me wrong – this is a great collection of evocative villages, but at the same time, it feels like it could have used a final, unifying pass t make sure that the minor hiccups have all been purged. This does not make this compilation anything less than inspiring, sure, but it remains a nagging hiccup that irks me more than it probably should. If you liked what I had to say about the respective, formidable villages, but haven’t gotten them yet, then consider this to be a must-own book. If you have them already and hoped for a final improvement for the print-compilation, though – well, then you may end up disappointed at a very high level. My final verdict will hence clock in at 4.5 stars, rounded down for the purpose of this platform.

You can get this neat compilation here on OBS!