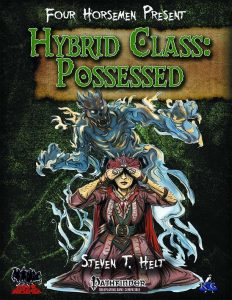 This hybrid class clocks in at 14 pages, 1 page front cover, 1 page editorial, 1 page RSD, leaving us with 11 pages of content, so let’s take a look!

The possessed is a hybrid of medium and witch and gains. Chassis-wise, d8 HD, 4 + Int skills per level, proficiency with simple weapons, light armor and light shields (interesting differentiation that we don’t see often). Armor heavier than light imposes spell failure chance. The possessed casts arcane spells drawn from the custom spell-list of the class. The class is a full caster, gaining access to all 9 spell levels and casts spells spontaneously, with Charisma as governing spellcasting attribute. The class gets knacks at 1st level and receives ¾ BAB-progression as well as good Will-saves. In a minor complaint, the 20th level entry has a superfluous “+6” in the 20th level entry’s BAB-column. It should be noted that 4th level yields the protected vessel ability, which nets a +2 bonus to Fortitude saves and saving throw against possession effects and mind-affecting effects not related to possession, which increases by +1 at 8th level and every 4 levels thereafter.

3rd level provides a witch or shaman hex, but not those granted by shaman spirits. Shaman hexes with the same name as a witch hex similarly can’t be chosen – nice catches there. Hex saves are governed by Intelligence.

The possessed is very much defined by her patron spirit, which is chosen at first level. Patrons get a patron bonus that starts off at +1 and increases by +1 at 5th level and every 4 levels thereafter. The bonus also affects her favored spells and her favored hex. Which brings me to the whole possession angle: You see, the favored spells act very much like patron spells –one for every odd spell level. The patron’s favored hex is gained at 1st level and may only be used when the patron is in control, but the patron bonus is added to the level of the possessed to determine the effects and DC of the hex. Beneficial hexes instead extend their duration by patron bonus rounds.

What is that about this whole control angle? Well, a possessed may surrender her control of her body to the patron as a free action during her turn (nice catch!) to let the patron assume control – the patron has full access to the possessed’s spells and abilities and acts in the interests of its theme and host. The patron may seize control when threatened – upon failing a save, being critically hit or reduced to ½ maximum hit points or below, the character must succeed a Will save versus 10 + ½ class level + Charisma modifier to remain in control. Patrons cannot be good, but detect the possessed’s alignment and not that of the patron, which can provide some seriously cool roleplaying opportunities, baked right into the framework of the class. Whenever targeted by an anti-possession or dispel/suppression effect targets the possessed, as a full-round action or when becoming unconscious, the possessed regains control. While in control, the patron adds patron bonus to saves versus exorcism-like effects and the like.

Patrons also all provide a class skill for the possessed, with some offering choice between options. However, the mortal frame is not made to house potent patrons – after all, otherwise there’d be no mechanical incentive to not be under the patron’s sway. Thus, patrons assuming control comes with a detrimental factor – namely the so-called control curse: While under the control of the patron, the possessed suffers from a detrimental effect, which is governed by the patron in question…and these tend to be serious.

A total of 20 patrons are included in the deal, and the respective control curses tend to be serious: When you e.g. take a look at the Strength patron, you have a penalty of -2 to all mental ability-based checks and Will-saves. Death even prevents the replenishment of hit points via positive or negative energy (but explicitly NOT forms of hastened natural healing, just restorative energies!). Darkness partially blinds the possessed and makes her lose Dex-bonus to AC as well as a 20% miss chance for attacks with spells and weapons. So yes, patron-choice REALLY matters, much more than for the regular witch, and should be taken into consideration for the build from the get-go. HOWEVER, there is also an associated benefit while the patron is in control, beyond those mentioned before: You see, to take the example of darkness as a patron – it nets darkvision 60 ft. (+30 ft. if you already have darkvision), the patron bonus is applied to Perception and darkness spells and it also increases their DC to dispel. For the potent drawback of death, you get the patron bonus to Fortitude saves as well as CL checks made when casting necromancy spells.

Being possessed by the ethereal patron makes the possessed susceptible to attacks from material and ethereal plane, bit halves her damage output with weapons and spells that require an attack roll. On the plus-side for this serious drawback, we have patron bonus added to touch AC as a deflection bonus. Famine nets nonlethal damage each round, but also provides some serious skill bonuses – as a whole, the total packages of the respective patrons, i.e. favored hex, boosts via patron bonus, drawbacks and favored spell selection provide meaningful alternate play modes – and some of them are really interesting: Space, for example, makes diagonal movement count as 10 ft. as a the control curse. So yeah, I like these!

As a capstone, the class increases this bonus to +6 and chooses one spell and one hex as additional favored hex and spell, respectively – she does add the patron bonus to these even when not surrendering control.

9 new hexes are included in the pdf – and they include a befuddling hex (which should probably be mind-affecting)…and some cool tricks. Take body portal, for example, which allows for the movement through a creature’s body on a failed save – only space, mind you, not reach, but particularly when dealing with big critters, this can be a nice, tactical advantage. As a minor complaint: Condemnation has a typo – it should be “affected”, not effected – oh, and the effect? Fewer than 0 hit points means you instantly DIE. No save. Ouch. Dimming lights, seeing the ethereal (reducing concealment), stealing darkvision or low-light vision…some intriguing options here.

Steven T. Helt provides the most occult non-occult class I’ve seen so far. What do I mean by this? While billed as a medium/witch hybrid, its take on patrons changes them more into something akin to oracle-y options than medium spirits, at least in how the rules feel. That is not a bad thing, however, for the pdf does understand the design-tenets of occult classes – you see, we have baked in, meaningful play-modes and player agenda; we have roleplaying opportunities hardcoded into the class abilities and the actual playing experience is radically different from both medium and witch, providing a distinct, unique identity. It also plays and feels radically different from Purple Duck Games’ excellent Vessel hybrid, going a completely different way. Now I wished it came with FCOs or some more of these creative benefits and drawbacks, but oh well.

So yes, I do consider this to be a well-made, neat hybrid class well worth checking out. My final verdict will clock in at 4.5 stars, rounded up to 5.

You can get this nice hybrid class here on OBS!