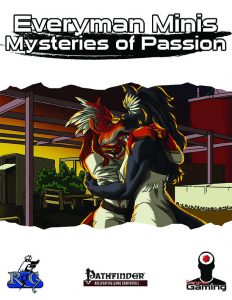 This Everyman Mini clocks in at 7 pages, 1 page front cover, 1 page editorial, 1 page advertisement, 2 pages of SRD, leaving us with 2 pages of content, so let’s take a look!

All righty, we begin this Everyman Mini with a brief introduction and a new 8th level spell, which would be symbol of debauchery: This duplicates symbol of death, but instead affects the targets with reckless infatuation, treating creatures that they have healthy relationships as objects of desire, attempting to stay as close to as many of them as possible, using their actions to engage in consenting and relaxing activities. These are so taxing that they potentially prevent the regaining of spells. Tastefully handled! Big kudos!

Now the main body of the pdf, obviously, is taken up by the new oracle mystery passion, which nets Bluff, handle Animals and Sense Motive as class skills. The bonus spells gained range from charm person to mantle of calm, matchmaker and later nets the new spell as well as waves of ecstasy and overwhelming presence.

Now, revelation-wise, we have life link from the life mystery, as well as punitive transformation – the latter, however, is incorrectly credited to the nature mystery, when it is a revelation of the waves mystery instead. Beyond these previously used revelations, we also have a couple of new options: Awesome Beauty acts as a fascination-inducing aura that prevents targets, sanctuary-style from potentially attacking you if they could be attracted to you. Cool: Via an exchanging of gifts, you can bond souls together, allowing them to sense the direction of their partner and giving you an idea of the subject’s emotional and health auras. You can also send telepathic messages to the subject, duplicating sending (which is not properly italicized). One question: Does the message reach both participants or just one? Desire sight instantly nets you the 3rd round knowledge of detect desires of all targets within 100 ft., making the oracle a fearsome foe in social contexts! With another revelation, you get Conceal Spell and add Disguise and Sleight of Hand to your class skills, with later levels providing Improved Conceal Spell and forcing witnesses of Conceal Spell that could be attracted to you to roll twice.

Another revelation nets you the option to add mercy effects to cure spells or cruelties to inflict spells, with higher levels yielding more cruelties/mercies. You can also add bard spells to your array and another revelation lets you add Charisma modifier instead of Dex to AC and CMD. Finally, we have scaling save bonuses versus charms and compulsions that increase to encompass immunity. The final revelation is an augmented outsider apotheosis that lets you still be returned to life as normal. You also gain immunity to age effects and a constant greater age resistance as well as at-will threefold aspect, with bonus types changed depending on whether you cast cure or inflict spells and sans penalties. Additionally, you may designate Charisma modifier targets that are in a romantic or platonic relationship, granting them the benefits of the final revelation, minus the DR. Cool!

Editing and formatting are very good on a formal and rules-language level, though I did notice minor glitches. Layout adheres to Everyman Gaming’s two-column standard with a white background, making this relatively printer-friendly. The pdf sports a nice full-color artwork and has no bookmarks, but needs none at this length.

Margherita Tramontano’s mystery is pretty much amazing – I really, really enjoyed this one and I love how it represents in a tasteful manner one of the most amazing forces that exist – love, passion and what they entail, concisely represented with viable and even culturally sensible options. I can see a community really benefitting from the gift-exchange tradition supervised by the oracle, for example. It’s a beautiful tradition that imho can serve as a great narrative tool to explain a healthy community. That being said, the minor hiccups do drag this down a bit, if not by much – hence, my final verdict will clock in at 4.5 stars, rounded down for the purpose of this platform. If you don’t mind these minor hiccups, consider this a must-own recommendation instead – as a person, I really…loved this! …sorry, couldn’t help myself. 😉

You can get this cool mystery here on OBS!