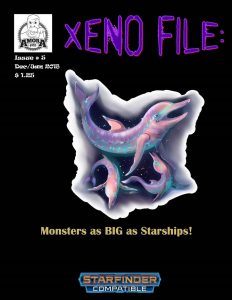 The fifth installment of the Xeno Files-series clocks in at 14 pages, 1 page front cover, 1 page editorial, 1 page ToC, 1 page advertisement, 1 page SRD, leaving us with 9 pages of content, so let’s take a look!

This pdf was moved up in my reviewing queue at the request of my patreons.

So, here we get something I really wanted to see – basically living starships and ginormous critters, for Starship-combat. The first of these would be the Hidd, which clock in at tier 15 and have created, in a cool twist, the hiddarrok – these folks are native outsiders with Con and Wis +2, -2 Cha and 5 HP. They have blindsense (vibration), a burrow speed of 20 ft and darkvision as well as +2 racial bonus on gunnery checks. Not the biggest fan of the race as presented, but they are, in essence, intended as adversaries anyway. Evil and greedy, the Hidd has a rather nasty strategy to pillage places…really cool.

Before you ask: The statblocks of the creatures herein depict them as starships, but also take their living nature into account, with appropriate critical damage tables. It should also be noted that each of the creatures within comes with surprisingly detailed methods for encounter and adventure-creation. The second creature, for example, includes a brief planet profile in the write-up.

The second such vast creature would be the tier 9 Millimaxxus, a gigantic jelly-fish like thing almost entirely composed of electricity, using its tractor tentacles and jamming capacities to hunt. With escape propulsion and a surprisingly stunning, amazing artwork, this one really rocks!

The final creature herein, or rather, creatures, would be the Queg, who come in tier ½ for regular quegs, tier 1 for pod mothers. They can emit gravitational waves…and are actually pretty happy in vacuum, with the pod-mother capable of hijacking the mind of pilots during the helm phase. Queg actually are playful and seem to enjoy collecting shinies – at their size, that unfortunately may mean ships. And yes, the artwork depicts them as ginormous space dolphins. As far as I’m concerned, that’s awesome.

Editing and formatting are pretty good. I noticed a few typo-level hiccups, but nothing serious. Rules-wise, I noticed no issues here. Layout adheres to the 2-column full-color standard of the series. The artworks deserve special mention, with 2 of the 3 pieces being really awesome. The pdf comes fully bookmarked, in spite of its brevity.

Beth and Dave Breitmaier provide something pretty amazing in this inexpensive pdf – they provide some really big threats to face down with starships, adding nice angles for the GM, while also providing unique abilities for the critters. The monsters range from darker themes to playfulness and run the general gamut of levels. In short, particularly considering the really low price point, there is nothing to really complain about here. This is a nice, unpretentious little pdf, well worth 5 stars, with my seal of approval added as well. I’d love to see a whole book of such vast threats!

You can get these organic monsters to challenge your starships here on OBS!