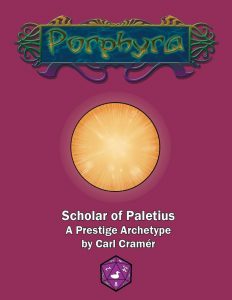 This pdf clocks in at 9 pages, 1 page front cover, 1 page SRD, leaving us with 9 pages of content, so let’s take a look!

So, what is the Scholar of Paletius? Well, in spite of the name, these folks do not need to worship Paletius, god of knowledge, though obviously, many do; from a mechanical point of view, the pdf offers a prestige archetype built from the chassis of the wizard and the collegiate arcanist. As such, we receive a full caster with 2 + Int skills per level, d6 HD, proficiency with quarterstaff, club, dagger, morningstar and sling. They suffer from arcane spell failure when wearing armor etc. The class receives 1/2 BAB-progression, good Will-saves.

At 1st level, scholars receive an arcane bond with either an object or creature – creature would net you a familiar, objects must be chosen from amulet, ring, staff, wand or weapon. Items must either be worn or held to have an effect. Bonded objects allow for 1/day casting of a spell not prepared. The class receives Spell Mastery at first level and at 4th level, when spending a total of 24 hours studying, the spells mastered may be changed – and she may apply the benefits to up to Intelligence modifier of these. Additionally, as a restriction, the spells thus chosen may not exceed the total of Spellcraft ranks. At 8th level, scholars may lose a prepared spell to cast a spell selected with spell mastery, allowing for basically a quasi-spontaneous conversion of flexibly chosen spells…but thankfully only 1/day, +1/day every 4 levels thereafter. At 10th level, any spell mastered via Spell Mastery can be cast 1/day, even if it has not been properly prepared…but no metamagic-modifications.

The scholar begins play with a spellbook and casts arcane spells as a prepared caster, with Intelligence as a governing attribute. Second level nets the class an aura of good akin to that of a cleric or paladin and 3rd level unlocks Halcyon Magic: At this level and every 3 levels thereafter, the class chooses a druid spell at least 2 spell levels lower than he could cast and treat it as though it was a wizard spell. However, the unlocking has another prerequisite: In order to choose a spell, the scholar must have a number of ranks in Knowledge (nature) equal to twice the level of the chosen spell.

At 5th level, spells with the good-descriptor are cast at +1 caster level, but preparing evil spells requires twice the number of spell slots to prepare. 6th level allows for the option to prepare a spell into an arcane spell slot with 1 minute of preparation, with 13th level allowing for this as a full-round action (which should imho provoke AoOs) – basically, you leave open slots to add flexibility to the class. 7th level add a number of rounds to the duration of good spells equal to 1/2 his class level – nice: Instantaneous, permanent or concentration spells are not affected by this ability. Nice catch. 9th level nets a constant protection from evil. At 11th level, the scholar adds +2 to overcome the SR of evil creatures/objects and checks to dispel evil spells or effects. 14th level unlocks holy arcana, adding the domain bonus spells of one domain of his deity to his spell list and spell book, treating them as arcane spells. At 18th level, 1/day when a spell or supernatural ability allows for SR and targets a scholar’s ally, he may, as an immediate action, redirect the effects to himself. Up to Intelligence modifier allies may thus be protected. All applicable saves, possibly more than one, must be succeeded and the ability has a range of 30 feet. 20th level, finally, brings timeless body.

The pdf concludes with a sample character who is presented at level 1, 5, 10 and 15 – Ulik Tomebound, the polkaan. The builds include spellbooks and halcyon spells are provided in green italics for our convenience – nice layout decision there! FCOs in the build have been added to HP, just fyi.

Carl Cramér’s Scholar of Paletius is a pretty strong class: As a prepared caster with some druidic magic added in, more flexibility via Spell Mastery’s improvements and at higher levels even domain spells, it certainly ranks at the highest echelon of the power scale. That being said, it should not be considered to be overpowered; the take on the sacred wizard makes sense and while personally, I would have nerfed the option a bit, I can’t in good conscience really complain about the prestige archetype presented here. The class will probably not wow you with never-before-seen uniqueness, but its framework is more than solid and deserves being acknowledged. All in all, this is a good offering for the low and more than fair price point. Hence, I will settle on a final score of 4 stars.

You can get this inexpensive prestige archetype here on OBS!