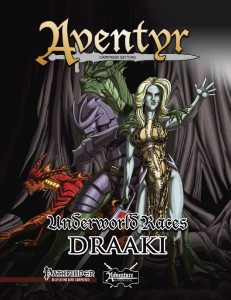 As with the other installments of the Underworld races-series, this one kicks off with a massive mythology of the subterranean races, a collective origin history that can be potentially transplanted from Aventyr into other settings, should one choose to do so. So what are the Draaki, wait don’t tell me – “descendant from dragons-blabla”, right? Wrong! Yeah, I was surprised as well.

Indeed, the now nameless race that was to turn into the Draaki once enslaved the primal dragons, now looking deceptively like their erstwhile slaves. If you want the whole story, though – then check out this pdf.

Onwards to the mechanical side of things – Draaki receive +2 to all physical attributes and -4 to wisdom, making them too geared towards martial endeavors for my tastes. They have the reptilian subtype (they are NOT dragons!), receive low-light vision and darkvision 90 ft, SR of 5+ character-level, light blindness and may change shape into a drow-likeness. They also receive +1 to atk and a +2 dodge bonus to AC and saves versus draconic spells and abilities. They also sport 5 subtypes. One has a slapping tail that deals 1d8+str-mod damage, but fails to specify whether it’s a primary or secondary natural attack. One has gliding wings (which allows them to glide – d’uh – and never take falling damage) and 3 sport breath weapons – one cone of acid, one line of electricity and one a line of fire, all usable 1/day as a standard action for 1d6 points of damage, no scaling.

Over all, the Draaki’s base racial characteristics feel a bit too much – two superb senses, SR AND the subtype-ability together feel a bit bloated. We also receive favored class options, which generally are solid, though the addition of force damage to alchemist bombs feels odd – so direct hit versus incorporeal targets is marginally effective? Yeah?

On the other side, rules for weaponry made from dragonbone and special sinew bowstrings for composite bows make for damn cool, if powerful materials. A total of 6 new racial feats are provided – gaining a fly-speed with your wings at 5th level would be damn nice, and energy resistance versus your breath weapon’s energy is also an okay, flavorful way of enhancing racial fluff, while two feats that just net skill-bonuses fall firmly in the filler category. The feat that enhances the tail attack is just confusing – “You may use your tail to make one secondary natural attack per round in addition to attacks of opportunity.” Come again?. So…can I use the tail to deliver AoOs now? Is it a secondary natural weapon or a primary weapon or both? Total confusion. Is the secondary attack at (I assume…) the usual penalty IN ADDITION to the secondary (or primary?) attack? No idea – those tails need clarification. As a kind of mini-capstone to the feat-tree, with 3 feats prerequs, we can get +4 to UMD AND +2 to ALL saves versus spells and spell-like abilities…ähem…this is cool, yes, but too strong for my tastes.

We also receive 3 new magic items – greaves that allow you to slow falls by bounding from wall to wall (damn cool!), a focus to improve their breath weapon and a periapt that permanently bestows a new spell on the draaki. Said spell is one of the 3 new ones and nets a secondary bite attack that deals bleed damage on a crit. Okay, I guess. Very interesting would be the spell that increases the effectiveness of the breath weapon used in conjunction with it – think of it as a teamwork breath weapon disguised as a spell. Finally, one spell bestows a draaki breath weapon or +1 use of it.

The final piece of crunch would be a 5-level racial paragon class, which renders these breath weapon-focused tricks viable in the first place: At full BAB, d10, 4+Int skills and up to +2 ref and fort, +3 will and +3 natural armor, the paragon class is solid – it allows the draaki to get more than one breath weapon, increase their damage dice, and even combine them in one action. Their increased spell resistance has not been properly bolded and they receive detect magic at will and 1/day dispel magic and as a capstone, they increase flight speed, breath weapon range and also receive DR 2/-.

Editing and formatting are good, though a couple of bolding glitches, typos and similar minor glitches can be found herein. Layout adheres to a drop-dead-gorgeous two-column full-color standard with rocky borders and awesome graphic elements, making this a beautiful, if not very printer-friendly pdf. The plentiful original pieces of full color artwork throughout the pdf are nice. The pdf also comes fully bookmarked for your convenience.

The Draaki have me torn – on the one hand, I consider the base race a tad bit too strong, a tad bit too geared towards the nomad/martial trope. On the other hand, the base breath weapon of non-racial paragon-draaki are pitifully weak, while the PrC makes them more powerful, without making them too strong. Indeed, when taking the feat-cost etc. into account, the racial paragon-class may even be a tad bit weak. The new items are cool, though the spells are a bit weak. The feats leave me torn as well.

So, are the Draaki boring? No, they’re not – they are an interesting race and rank among the better of draconic-looking humanoids I’ve read. Their supplemental material ranges from great to slightly problematic. All in all, they are a nice race, but one that could have used a tad bit more streamlining. My final verdict will clock in at 3.5 stars, rounded down to 3 for the purpose of this platform.

You can get this race here on OBS!
Endzeitgeist out.