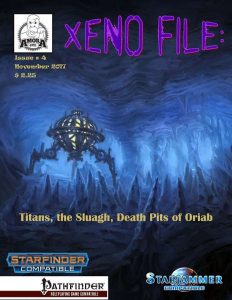 The fourth installment of the Xeno Files-series clocks in at 31 pages, 1 page front cover, 1 page editorial, 1 page ToC, 1 page advertisement, 1 page SRD, leaving us with 26 pages of content, so let’s take a look!

This reviews was moved up in my reviewing queue at the request of my patreons.

Okay, we begin this supplement with a new Starfinder race, namely the titans. The race gets 6 HP, +2 Str and Con, -2 Wis, making them a bit lopsided on the physical angle. They are humanoids with the giant subtype, not the usual racial subtype of Starfinder, which *may* in the long run cause type-issues, but for now, there’s not true issue in this. They get low light vision and are unaffected by high gravity, gaining an untyped (should be racial) bonus of +1 in environments with regular gravity. They also are immune to radiation, hailing from an irradiated gas giant. Titans stand close to 9 ft. and we get details on their physiology as well as their home world and the usual “Playing a X”-bullet-point lists. The story tells of a war fought against horrid foes and the write-up includes an age, height and weight table – as an aside, I cringed somewhat at the word “thru” here, which is a weird colloquialism in the otherwise nice write-up. The section also provides notes on adventuring, nomenclature and language as well as a brief planetary profile.

We also get a PFRPG version of the race: Here, titans get +2 Str and Con, -2 Wis, are Medium humanoids with the giant subtype and thus gain low-light vision. They can hold their breath 4 times Con-score rounds and begin play with High Gravity Adaptation as a bonus feat and where gravity is no more than twice as strong as usual, its effects are negated. In areas with less pronounced gravity, carrying capacity is increased as though the Strength score was 4 higher – nice way of representing that concept! Radiation immunity is slightly problematic in its PFRPG-version, as, while it protects against radiation effects, it also references the radiation descriptor, which does not exist. The race gets a reach of 10 ft., which is REALLY potent.

We also get a racial feat, Ancestral Birth. In PFRPG, it makes you Large and nets you +2 to Intimidate – should be a racial bonus. In SFRPG, you get +2 to Intimidate checks made to bully or demoralize does and add +2 to the DC of such checks against you. You also become Large. Both systems thus provide reach increase, but in PFRPG, we have a Medium creature with reach, which grows further, which would yield, once more, reach. Now I assume that this does not stack, but clarification would have been nice.

Now, in a nice article, we learn about the Union next – those humans that came from the Sol system, namely Terra…fun fact: Intoxicated grey teens crashed on earth, making first contact a rather funny matter – however, when the greys attempted to damage-control, other planets intervened, and thus, the seeds of the union were sown. All in all, a nice take on the trope. Enjoyable read.

Next up would be two new archetypes for Starfinder, the first of which would be the Neo Geisha, who trades in 2nd, 4th, 9th and 12th level, ability-wise, with 6th level being optional. At 2nd level, we get tea ceremony. You get Profession (neo-geisha) as a class skill and may brew tea over 30 minutes, gaining a +1 bonus (should probably be insight) to Culture and Diplomacy roles with targets partaking, but only while you still have 1 Resolve remaining. The bonus increases by +1 at 6th level and every 4 levels thereafter. Participants become relaxed and may, for 24 hours or until taking an 8-hour rest, spend a Resolve point to reroll a failed save against “being freighted and fear effect.” 4th level provides the option to lock gazes with an opponent as a move or standard action, using Bluff as a diversion, opposed by Sense Motive. When using a standard action, you get +2 to the roll – once more, untyped. On a success, you fascinate the target, Will saves to shake off the condition when faced with threats are available, but the neo-geisha may spend a Resolve point to make the target reroll the save. Maintenance of eye contact is a swift action. The effect is broken by becoming unconscious, dead, etc.

The gather crowd ability at 6th level allows the neo-geisha to collect a crowd with a 1d10 minutes performance, generating ½ character level times the result of the check. This can be a really cool tool. The 9th level ability would be soul focus, which penalizes the save to break eye contact with -4…and it contradicts the previous ability: The soul focus suddenly talks about threats automatically breaking fascination no longer, which is not how the base ability works. Weird. A target affected by eye contact ignores the shaken condition, which is interesting and something I like here. The 12th level ability nets charm person/charm monster, command and command, greater 1/day (+1/day at 13th and 17th level) as a SP. Weird: Why would I ever use the lesser of the two SPs? Looks like some sort of scaling was lost here.

The second archetype would be the burster, who gains alternate class features at 2nd, 4th and 6th level, with 9th and 12th level as optional exchanges. 2nd level yields pyrokinesis, allowing you to determine the size and temperature of fires and may use skills to determine sources. They get key ability modifier +2 fire resistance, which increases by 1 for every two character levels, starting at 4th level. The character can also shoot fire projectiles key ability modifier times per day, with 1d6 fire damage as the damage and +1d6 burn on a critical). Starting at 4th level, the character can spend Resolve Points to add +1d6 fire damage per point, or spend Resolve to gain an additional daily use. The projectiles attack KAC. A problem: We get no range; I assume the range of flame sense, but this needs clarification. 4th level yields burst, which inflicts both 1d6 fire and 1d6 bludgeoning damage in a 10 ft- radius, with a Ref-save to halve. The cost is a Resolve point and 9th level expands the area to 15 ft., 20 ft. at 17th level. This leaves you fatigued for 1d4 rounds; bursting again in that time-frame leaves you exhausted for 1d6 rounds and when bursting while exhausted, you become unconscious. Slightly odd: No scaling of the damage here.

The 6th level ability is actually a choice between 3: Detonator lets you sense objects etc. in range of your flame sense, which you can then detonate via Resolve expenditure. A table of examples with bulk, Resolve requires and damage is provided. Nice. Extinguisher allows you to quench fire – problematic here is both the reference to a PFRPG legacy action and the lack of classification of how large of an area you can extinguish. Thirdly, flame on nets you the human torch’s flight and a defensive flame ability. 9th level lets you choose another one of these options, a damage die increase of the base bolt, or an upgrade for the damage caused by the burst…to 5d6. Which is odd, as it moves from separate dice pools for the damage types to one, which is halved to determine the damage caused by each type. Not as elegant as it should be. The 12th level option provides another 6thor 9th level choice.

Next up would be the Death Pits of Oriab, penned by Chance Phillips. Oriab is a place both wondrous and horrid, a vacation hub that basically is a LE gladiatorial tourist planet. Weird header: “Who fights Death Pits?” – There’s an “in” missing here. Veterans of these cruel gladiatorial games can represent that experience with the Veteran of the Death Pits feat. The feat, in both PFRPG and SFRPG, nets more damage versus animals with more HD, as well as a bonus to atk versus targets with cybernetic enhancements. Minor complaints: In SFRPG, the feat should probably have a typed bonus and would have been more elegant when tying in with the significant threat mechanic instead. We also get two challengers here – the CR 10 T-Borg MK II and the vesk soldier Argorivortu (CR 8).

Beyond that, we also get a massive array of cool dressing tables: 12 random street vendor offerings,. We also get a NPC-generator of 1d12 random descriptions and 12 random quirks. A massive table of 100 different events further allows you to customize the experience here.

The next article, penned, by Allan Leeson, details the Sluagh: Founded by Jonas Sluagh, they evolved from a security enterprise to the Sluagh Research Group – basically, dark mirrors of the Pathfinder Society, bodyguards for xeno-archaeologists that found a dread relic, which allowed Jonas to render creatures slack-jawed automatons, courtesy of braces controlled with the respective control gauntlet. And yes, the company has since then managed to replicate these dread devices. As such, both the brace and the horrid things it can cause and the potent control gauntlet are provided. We also get basically a template for the braced and a CR 5 sample braced drone. Nice one!

Editing and formatting are okay, but pretty weak on a formal level – I noticed a couple of issues. The rules-language is generally functional, if not always perfect. Layout adheres to a nice 2-column full-color standard and the pdf comes fully bookmarked for your convenience. The pdf sports a nice blend of full-color artworks, with some really nice pieces.

Greg LaRose, Chance Phillips and Allan Leeson deliver a rather massive pdf for the extremely low price point – and while the rules-components sport a few rough edges here and there, the dressing and ideas herein deserve being acknowledged. Still, with the accumulation of minor hiccups, I can recommend this as unanimously as I’d like to. While absolutely worth getting for the low price point, my final verdict cannot exceed 3.5 stars, I don’t feel like I can round up here.