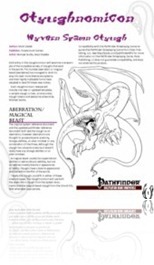 This supplement from Purple Duck Games comes as 3 pdfs – 1 6-page SRD-pdf, 1 1-page pdf containing the monsters and characters as tokens and 1 6-page pdf which contains the actual content.

Otyughs are strange creatures, somewhere in-between aberration and magical beast and this first installment of the Otyughnomicon-series offers some ways to expand upon them:

This one, as the title suggested, offers us the wyvern-spawn template (CR +1), which grants among other bonuses, of course, the signature deadly poison of the wyvern. A sample CR 5 Otyugh is also presented in two variants – the Grand OGL Wiki and Core-rules get their own respective statblocks. Neat! I actually did prefer the GOW-version, as it has more abilities, but to each his own.

The pdf provides more, though, by adding a sample encounter in a mining town called electrum delve (which comes with a town statblock)- there, the PCs will not only have to deal with the wyvern spawn, but also with a tribe of unluck-causing Pugwampi-gremlins, featuring statblocks for their rank-and-file soldiers, their druids (and baboon companions) as well as their war-leaders. Did I mention their trained stirges or the quiver of spider poison they also have? Nice little sidetrek.

Editing and formatting are ok, I did notice some minor editing glitches, which, at this length, could have been avoided, I didn’t notice any glitches. The 2-column-layout is printer-friendly and mostly b/w with some purple accents you can easily print out as black. The b/w-artworks are quite neat for this low price-point, so kudos for that! The pdf also features extensive bookmarks. I did like the tokens and the fact that we get two variants for the otyugh in regard and the added encounter is nice. The pdf comes with extensive bookmarks. While the bang-for-buck-ratio of this little pdf is plain awesome and you get a lot of content for the extremely fair price, the content nevertheless did not exactly blow me away – thus, my final verdict will be 3.5 stars rounded up to 4 due to the fair price.