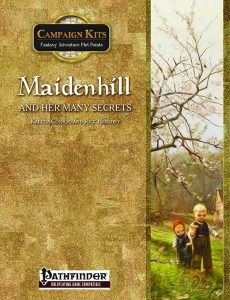 This installment of the Campaign Kits-series clocks in at 40 pages, 1 page front cover, 1 page editorial, 1 page ToC, 1 page SRD, 1 page advertisement, 1 page back cover, leaving us with 34 pages of content, so let’s take a look!

So, what is a campaign kit? The simple reply to this question is that is somewhere between a dressing file and a sequence of encounters that can be developed into basically a collection of different little modules. We get the small city of Maidenhill, with full-color map (alas, sans key-less version, but since it has no SPOILERS, I’m okay with it) and settlement statblock – Maidenhill can easily be placed in pretty much any campaign setting: You just need a forest and a river.

The city itself is pretty sketch-like and basic in its depiction – it basically acts as a kind of everyday village backdrop for the encounters/adventure-sketches presented herein; we get 2 level 1, 2 and 3 encounters/modules as well as 1 for levels 4, 5, 6, and 7. Why am I using these brackets? Well, the respective sections do provide the required statblocks to run them in appendices, but as a whole, these scenarios are basically organic little sidetreks – they are basically starts and set-ups for modules, but still require the GM to steer the respective adventure and build upon it.

Okay, got that? Great, so let’s take a look at these, so let’s dive deep into SPOILER territory. Potential players should jump to the conclusion.

All right, still around? Great! So, the angles for the level 1 would be that transients have been going missing – travelers, homeless…but why? Is the mayor involved? What about the rumor that a local vampire is covertly living here, tolerated for as long as he leaves the locals alone? Fact or fiction – the GM decides. The second one has the PCs hunt down a particularly nasty wild boar that has attacked a supply train…which yields not only a reward in food, but also in bacon.

At 2nd level, we have an investigation of a mill haunted by ill-fortune, where components of the mill can turn out to be pretty dangerous traps…and pugwampis need to be purged from the building. The second level 2 scenario. The second scenario is pretty hilarious – and focuses on an elderly lady cursing the male population of the town with baldness…and it turns out the old lady did have her reasons for doing so!

At 3rd level, PCs will get a chance to solve a brief trail of clues for a little investigation after a robbery; and the second of the little encounters would be a minor goblin extermination. The level 4 set-up deals with the logging community aspect of the settlement and requires that the PCs catch an elven anti-deforestation activist. The level 5 encounter builds upon a very important component for the peace and morale of any frontier town: Namely, the PCs are asked by one of the prostitutes of the settlement to help them – two of their profession have been killed and the trail leads to a rather nasty, religious bigot. At level 6, the pdf offers perhaps the best of the angles – there is a tragic mansion out of town, one haunted by the spirits of tragedies past…but in the past, these spirits, also represented by nice haunts, have remained contained to the place…but now, an infamous highwayman has taken up residence in the mansion…and in order to restore peace, the PCs will have to deal with this intruder.

Finally, for level 7, we go full circle – remember that level 1 hook about the vampire hiding in the settlement? Well the highest level set up is all about taking down this vampire alchemist and his spawn. The pdf also feature a bunch of statblocks for the beings featured herein and two smaller maps for locales featured herein beyond the town map.

Editing and formatting are very good, I noticed no significant glitches. Layout adheres to a nice, aesthetically-pleasing 2-column full-color standard and the pdf comes fully bookmarked for your convenience. The pdf features really nice, picturesque full-color artworks. Cartography is decent and functional, but not as impressive as the artworks.

Kalyna Conrad’s Maidenhill makes for a great little base between big adventures; it is a change of pace in as far as it is really, really down-to-earth; even the traditionally more scary set-ups are relatively benevolent in their resolution,, evoking the equivalent of a fantastic small-town’s tasks. This campaign kit does not sport world-changing events or the like; instead it acts as a nice grounding between bigger tasks and adventures. While the town could use a bit more detail in the beginning and a handy summary of key personalities or the like, Maidenhill makes for a great little home away from home for adventurers. It may not be a spectacular book and a little bit too idyllic and picturesque, but it is a very useful and inexpensive one for the amount of content provided. Hence, my final verdict for this neat little offering will clock in at 3.5 stars, rounded up for the purpose of this platform.

You can get this encounter-collection here on OBS!