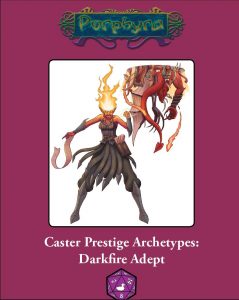 That out of the way, let us take a look at the class herein, with is built on the chassis of wizard and the blackfire adept, with d6 HD, 2 + Int skills per level, with d6 HD, 2 + Int skills per level, full spellcasting progression, good Will-saves and 1/2 BAB-progression. Proficiency-wise, they only get simple weapons. Darkfire adepts begin play with an evil cleric’s aura and the ability to spontaneously convert spells into summon monster, with 2nd level providing the Sacred Summons feat. 4th level yields Augment Summoning and makes the adept qualify as having the Spell Focus (conjuration)-feat for prereq-purposes.

At 3rd level, the character chooses an evil outsider, including asura, qlippoths, rakshasa, etc., gaining +1 to Cl, saves, Charisma ability and skill-checks versus these and when using planar ally/binding, +2 HD of outsiders of the chosen subtype may be called, which also gain the darkfire adept’s class level as temporary hit points as well as a bonus of +1 to saves and to DCs to banish/dispel them. 7th level and every 4 levels thereafter yield another outsider type to choose from, additionally increasing the aforementioned bonus types by a further +1. Starting at 6th level, the character receives the darkfire taint, which may be executed as a standard action versus a target within 30 feet – the target receives a save penalty versus the adept and the adept a bonus to atk and CL-checks. The taint lasts class level rounds and increases in potency at 12th and 18th level to +/-2 and +/-3, respectively. At 8th level, prepared spell or spell slots of 4th level or higher may be sacrificed in order to generate a darkfire eruption, which doubles as a slightly improved unholy blight – one with slightly more damage, that ignores hardness and disintegrates those slain. Beware, do-gooders!

9th level allows for the sacrifice of a prepared spell or spell slot to bypass summon-warding, with lower levels than the wards only allowing for a check and 16th level allowing for the use of this ability to work even in magic-dead environments and similarly powerful effects. At 10th level, summoning evil subtype (not alignment!) creatures is only a standard action for the darkfire adept. Here, an unfortunate typo has crept into the pdf – it should be “Note”, not “Not”. Starting at 13th level, creatures of the chosen darkfire pact retain their summoning options, which can get pretty crowded…but interestingly, such creatures are not under the darkfire adept’s control, which makes the whole endeavor a dangerous proposal. Starting at 14th level, the darkfire adept may decrease damage inflicted by the attack of a creature versus a target affected by his darkfire taint by 1 hit point per class level as a swift action – if he does and the being is slain, he gains the target creature’s HD as temporary hit points. As a capstone, the darkfire adept may use his darkfire eruption as an immediate action whenever a conjuration effect happens nearby (Nasty and not necessarily intentional – that includes healing spells! The wording makes me think that this should only work for conjuration [teleportation] and summoning effects…), potentially dropping foes on evil planes…talk about expressway to hell…

As per the tradition of this new series, we receive information on using arcanist, cleric, oracle, psychic, sacerdote, sorceror, summoner and witch as alternate chassis-bases, so if you wanted to play a darkfire adept based on one of those classes, you’re in luck. The prestige archetype does include a significant array of class-specific favored class options for core races and some of the stars of the Porphyran races.

Carl Cramér’s darkfire adept is an interesting, generally well-crafted prestige archetype – while the summoning aspect is slightly problematic as a system-inherent component, the prestige archetype’s darkfire taint makes for a fun base mechanic, though one that could have been tied even more into the summoning aspect: The mechanic is cool and having more options for combo-gameplay would have helped to set this fellow further apart. This is not bad, but it is also not a mindblowing installment -all in all a solid one that deserves a final verdict of 3.5 stars…and I’ll round up for it, courtesy of the fair price and the fact that it does not deserve being called mediocre.