Maiden of the Shrine of the Snubbed One & Friends (Troika!)

Maiden of the Shrine of the Snubbed One & Friends (Troika!) 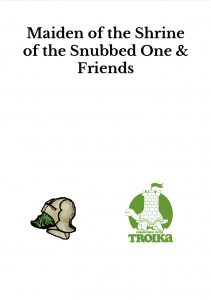 This supplement clocks in at 8 pages, 1 page front cover, 1 page editorial, leaving us with 6 pages of content, with each page containing one new Troika!-background, so let’s take a look!

Okay, so the first thing you need to know here, is that this is a satire-product spoofing certain individuals in the OSR/indie gaming scene. In its original iteration, this was clearly a satire in the tradition of Juvenal, i.e. designed as a take-down. Most of the backgrounds made fun in a scathing and entertaining way of some gaming tropes in a parodist manner…but two of the backgrounds featured in said original iteration were obviously very savage takedowns of certain individuals. I am not stating which (though that was rather obvious), since the author has since replaced the content, and it’s not up to me to drag that back to light.

Anyway, how savage were they? Well, if you’re into battle-rap, I’d consider them to be as close to a bodybag-level take-down as I’ve ever seen in RPG-design. I was sitting at my screen, and couldn’t help but go “Oh, damn, that’s brutal!!” Soul Khan vs. J-Fox or Caustic vs. Jefferson Price levels of brutal, in context.

Now, these two backgrounds were the only ones that targeted specific individuals, and while I considered them to be HILARIOUS, they were essentially unplayable by design, having only the most rudimentary skills, useless possessions and in fact, seriously negative skill-values.

While I fully admit to bemoaning this imho somewhat hilarious savagery being removed from the supplement as a person, as a reviewer, I am grateful for that, as the new material is actually playable, making the new iteration a better gaming supplement.

The supplement does make use of Troika’s openness for advanced skills and invents quite a few, as recommended by the game.

It should be noted that this is still the most savage satire I’ve seen in the guise of a RPG-supplement; it is somewhat crude, deliberately scathing, and certainly not for everyone.

Not deterred by that? Okay, awesome, so what are the backgrounds?

The first background would be the eponymous maiden of the snubbed one. Regardless of your gender, if you’re an adherent of the Small God known as the Snubbed One, you’re a maiden, and you get zines, bronze peaches, and packets of flax seeds if you choose this background. EDIT: A minor line break glitch has been rectified here. For advanced skills, we get Bureaucracy, Rant, etc. One of them would have warranted some minor explanation in my book: “Secret Sign: Cockroach Trails.” It’s not impossible to improvise, sure, but it’s weird and specific enough to make me want to know more.

…and now it’s time for me to write the sentences that I never thought I’d write. The second background…is the “sentient used condom.” No, I am not kidding. This one lets you fire….ähem…semen as a ranged or melee attack, as a pistolet, and you have modest armor.  Each “shot” does cost 2 Stamina, though. You can also pay 3 stamina when someone eats your…ähem…content to heal them as if they had eaten a provision. Instead of consuming provisions, you must convince individuals to use you in your intended way…which obviously becomes progressively ickier. There’s a reason you get Repulse as an advanced skill…

The first of the new backgrounds would be the friendly board game. This one nets you two free-form d6s that you can add either one or both to any roll, expending them to the next day. You can also test your Luck to have the GM answer a yes/no question. You use your pieces (only some of which are actually ones for your game!) to communicate with others, which can be rather interesting if roleplayed properly.

Next up among the new ones is the haunted typewriter (Typewrighter) ; you may suck big time at Arithmetic (-6), but you do get Writing, Reading, Second Sight…and Monkey Handling for the chimpanzee that you start play with. Minor nitpick: Pretty sure Arithmetic should read Mathmology instead.

After this, we have the nemesis of the no longer represented edgy devs: The soy lord, who actually does know his Mathmology (and has a hand-held device as starting possession that helps there), and has both impeccable outfit and manly beard – as such, Barbering 4 and Etiquette are advanced skills, and these fellows do come with knife and axe fighting as well as a random spell.

Finally, there would be the “Sexy snake person.” To quote the pdf: “You are a sensuously sinuous sexy snake sophont. […] Remember, you are a sexily scaled serpent, not some slimy, but sexy in their own ways slug.” This background nets you boobies (your choice if they’re detachable or not), two penises (if you want them), a sexy snake tongue that helps with oral tasks requiring finesse, a No kink-shaming t-shirt…you get the idea. The Advanced Skills include constricting, seduction, etc., as well as Fang Fighting, but the background doesn’t specify as what weapon the fangs are treated: Small Beast or Modest Beast, or something else?

Editing and formatting are okay; not great, but certainly functional. Layout adheres to a simple, printer-friendly b/w-standard, with public domain artworks used; these artworks are not explicit, mind you. The pdf has no bookmarks, but needs none at this length.

Whether you’ll like this pdf or not will be highly contingent on what you value in a supplement.  If you want some backgrounds that do a solid job at offering some unique Troika-options, then this MIGHT be for you. It’s an okay supplement if you disregard the whole satire-angle, and probably somewhere in the lower 2.5 to 3-star vicinity. Without context, it loses some of its appeal, and its rules are not always as tight as I’d wish them to be.

However, personally, I’d primarily recommend it to people aware of OSR/indie gaming-drama, who enjoy reading brutal takedowns. This delivers, and it does so in its revised version with more actually useful content. I like that, and I try to rate supplements primarily for what they are – and this is, primarily a satire that happens to also be playable content. As such, my final verdict for this will clock in at 3.5 stars, rounded up due to in dubio pro reo.

You can directly support the creator of this supplement here on patreon!