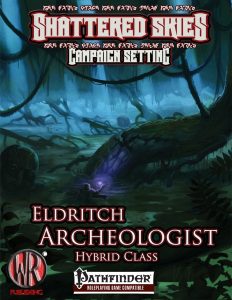 This hybrid class clocks in at 11 pages, 1 page front cover, 1 page editorial, 1 page SRD, 1 page back cover, leaving us with 7 pages of content, so let’s take a look!

This review is based on the revised iteration of the class.

The eldritch archeologist, chassis-wise, receives d10 HD, 4 + Int skills per levels, proficiency with simple and martial weapons as well as with all firearms and light armors. The class receives full BAB-progression as well as good Fort-saves.

The eldritch archeologist adds 1/2 class level to all Knowledge skill checks and may, at first level, use a swift action to grant himself a +1 luck bonus to atk, saves, skill checks and weapon damage. Mainintaining thsi bonus is a free action and it can be maintaining for 4 + Cha-mod rounds per day. Interesting: It is treated as bardic performance and thus does not overlap with it. The bonus increases by +1 at 5th level and ever 6 levels thereafter. Unlike a gunslinger, these guys do not start off with a firearm, but may purchase them at only 50% cost later on. They also begin with the ability to sell non-magical objets d’art via Appraise at an increased value – nice: if playing with factions or affiliates, you may instead increase your standing as an optional reward.

The class also gets a passive secret-door-style sense that detects valuables, allowing for unprompted Perception-checks. It should be noted that the skill is not properly capitalized here. The class begins with grit, which is governed by Wisdom…and, unless you have a firearm, non-recharging, which makes the deeds also gained at first level less reliable. Speaking of deeds: Formatting is highly inconsistent here: First, we get them in an italicized manner and then, they suddenly are bolded. The deed-selection is a blending of different basic and archetype-deeds: The pistolero’s “Up Close and Deadly” replaces Deadeye at 1st level; 3rd level deeds are standard gunslinger-fare; 7th nets deadeye, dead shot and startling shot as well as targeting…which is a bit weird, considering the default convention of 3 deeds per level. Similarly, 11th level nets Bleeding Wound, Expert Loading, Lighting Reload and the pistolero’s Twin Shot Knockdown. 15th level nets only slinger’s luck (odd: Other deeds have been renamed to e.g. “Archeologist’s Initiative” – why not this one? And the class has a luck-mechanic…why not use it for a more unique twist on the deed?) and 19th level nets the 3 default deeds.

2nd level provides uncanny dodge and nimble (yawn), 1/2 class level to Disable Device and Perception, with 6th level unlocking the option to take 10 for these, even if under duress. The level also provides a +1 dodge bonus to AC while wearing light or no armor, which increases by +1 every 4 levels thereafter. The example is incorrect: The bonus caps at 18th level at +5, not at 20th level. 3rd level nets trap sense.

4th level, the class tries to do something unique and fails to grasp the ramifications: AoE spells and effects no longer affect any objects these guys are carrying and objects they carry can no longer be the target or spells or effects. No caster level check, no scaling, nothing. Flat-out no dice. See, the whole Mt. Doom thing would have been so easy…Frodo just should have taken 4 levels in that class.

5th level nets Lore Master (10 on Knowledge checks, 1/day take 20 as a standard action, +1 per every 6 levels to a maximum of 3/day), 6th level provides evasion, 10th jack of all trades, 16th improved uncanny dodge and 20th level, as a fitting (and cool) capstone, these guys may freely handle artifacts, automatically fulfilling their requirements and even have the chance to know how to destroy them!

The pdf closes with a sample level 7 character – as a nitpick: It’s Cha, not “Chr”.

Editing and formatting are okay – I noticed a couple of minor hiccups, but, as a whole, this is still okay. Layout adheres to a nice two-column full-color standard and the pdf sports two nice full-color artworks. The pdf has no bookmarks, which constitutes a comfort-detriment.

Robert Gresham’s Eldritch Archeologist is a decent variant gunslinger that wants to be basically Indiana Jones- the class. The good news first: It kinda achieves that goal. Kinda. It does not grant the whip-feats you’d expect. It doesn’t net you gunslinging. Its story-abilities, with the imho OP flat-out immunity at 4th level, which just asks to break some adventure plots doa good job at depicting the gunslinging archeologist. Kind of. The absence of gunsmith and the lack of a gun at first level…kinda sucks. It inherits the issues of a full BAB-class…and while its ample skill bonuses mean that you can be a pretty decent sage, the one flexible ability is based on Cha, making the class very MAD (multiple attribute dependant) – without making the components really come together. The luck-mechanic at first level could easily tie in with deeds for a more interesting gameplay; deeds could actually be unique and offer some item-interaction…but no. Apart from a precious few exceptions, you’ll notice that pretty much all rules-relevant components have been done before.

This is not a complex hybrid, a savage, a deadeye hexer or a bloodrager type class – it is a hybrid that took different parts and smashed them together. It’s not bad per se…but it’s literally design-work most GMs could do. It’s also a class that feels a bit all over the place: To excel at the mental pursuits, you need Int high; for luck Cha…for ranged combat Dex…and Con would be nice as well. MAD classes like this need some synergy, some rewards for different focuses and I can’t see this one delivering that. I don’t really see the bardic aspect and the luck doubling as a performance leads to all kinds of weird questions regarding masterpieces, feats with the prereq, etc., as bardic performance potentially affects multiple targets.

The archeologist’s ability never specifies what or whom it precisely affects “giving him” implies single target, though, which generates aforementioned weirdness. Anyways, the class is better than the parapsychologist…but frankly not by much. I can see some value in this for inexperienced GMs who have a player who wants to play Indy. Experienced GMs and designers, though, can quite possibly do a better job with the concept. My final verdict will clock in at 2.5 stars, rounded down.