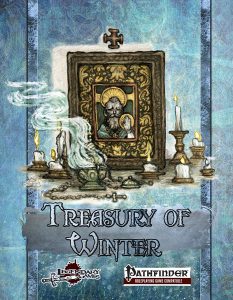 We begin this pdf thus with armors, the first of which would be the glitterfrost buckler: When confronted with foes that feature gaze attacks, you can peer through it and thus gain a bonus to saves: Pretty cool: You can expend uses of its blinding property to reflect gazes back at attackers as an immediate action, though a target has to be within 20 feet to be affected thus. Still, pretty neat concept and execution. The next armor, the gorynych scale has its properties not italicized in the text, but oh well. Really cool in its visuals, it allows you to not only gain all-around vision via its 3-headed dragon-designs, you can also command the pauldrons and helm that resemble dragons to emit cones of flame…and yes, even combine the blasts, now with properly codified activation actions. Winterbark Warding allows creatures wearing it to gain woodland stride and protects them from cold climates as well as granting DR 5/- versus attacks executed by plants or via wooden weapons and the DR also applies against plant-themed spells like spike growth et al.

The pdf goes for weaponry next – a total of 5 are provided. The first of these, the Bogatyr Blade…is uncharacteristically opaque for Legendary Games: “When attacked by a creature using a rage effect, including magical effects as well as exceptional abilities…” What are exceptional abilities? Does bloodrage count? Isn’t that supposed to be extraordinary? Anyway, the blade provides minor morale bonuses versus such targets as well as against swarms and troops. Pretty cool: You may change its shape as a standard action – into other weapons…or even a pebble. I really like that idea. The Diamondice Dagger can suppress cold resistance/immunity on critical hits and dispel such defenses granted by magic. Multiple critical hits in a given round actually render this ability more potent, which is a pretty cool (haha) catch. Really amazing: weapons with the frost or icy burst abilities can be sharpened by using this dagger as a whetstone as a full-round action, granting them keen edge for 1 minute. Even cooler: You may jam the dagger into snowy or frosty terrain, duplicating spike growth or spike stones respectively…and if you leave the dagger planted, the AoE increases…I love that concept-wise.

The Scythian Saber is intended for cavalry and lets you, on critical hits, perform a swift overrun, with the chance of adding an attack by the mount. Pretty nice. The Snowball Sling is less efficient in warmer climates, but the snowballs it creates may burst on critical hits in potentially dazzling and fatiguing splashes…which is an idea I can totally get behind. The Tiger’s Fang may switch sizes between being a +1 keen returning shortspear and a dagger and is particularly unpleasant versus feline or partially feline creatures, gaining bane‘s effects versus these as well as minor defensive bonuses versus foes damaged before during the day.

Next up would be a single ring, the Unseelie Solitaire, which can duplicate frigid/calcific touch, but only versus living creatures with blood, but with the potential of rendering the victims into solid blocks of ice! Fey wearing it also gain a massive bonus to Disguise to look like winter-touched fey, which can be incredibly useful, particularly since it gets the spell-interaction right. Two rods are up next: The Phosgene Flail, which can duplicate nasty cloud-based spells (you know, like acid fog, cloudkill…) 1/day and congeal these into a special weapon (+1 brilliant energy corrosive) that may sicken foes, then nauseate and finally suffocate them! I love this rod. The second rod would be the Snowstone Scepter which lets you see through cold-based weather, increases cold spell potency and even lets you see through solid sheets of ice and snow, x-ray style. Really cool: The wielder may cloud items in obscuring rime and 2/day transmute stone to snow and vice versa or even harden them. Oh, and it has spells. I love this one.

Unless I have miscounted, the pdf also sports 26 wondrous items: A bearskin cape enhances your combat maneuvers and nets scent as well as limited wild shaping; there is a blizzard in a bottle that may absorb cold spells and then be thrown or opened to unleash the winter’s force it has collected. Damn cool (and with a really nice artwork)! Rapping on a calf bone properly enchanted can bring forth a Calfbone Man, who is basically a modified, more potent servant with extremely cool taboos…absolutely glorious and suffuses with folklore. The Candle Crown generates warmth, decreases nearby wind severity and actually produces goodberries that also help to ward off hypothermia and frostbite.

The Dancing Reed Flute can force others to dance, while the Diamond of Everwinter protects and sustains its wielder from the elements and even absorb damage incurred. Mythic wearers may also increase the potency and options available via this one and new tiers gained actually provide new abilities – cool! The entrenching spade is amazing, allowing the wielder to excavate holes fast…and even leave trenches behind as they move. Love it! I also like the visuals of the Feyfrost Brush, which lets you paint with frost, generating pictures, marks and exert a bit of terrain control, though the mechanics here are a bit opaque – the mention of skill checks implies that its effects are skill-based, when they actually aren’t….if they’re supposed to be skill-based, then the DCs would be missing. Not sure either way. Feed that grants animals flight (yup, including dragged vehicles) and the Foxfire Stole, dimly sentient and capable of animating as a fire elemental, are two winners, though the latter lacks its weight. Glass Skates similarly are very cool and may leave behind ice floes. I absolutely adore Hill Seeds, which may cause the land to rise. Halters that bestow the cold subtype on animals, while the Icon of Timeless Faith can duplicate various spell-effects for divine casters, with unique modifications for e.g. the spiritual ally. Very cool: mediums and spiritualists get alternate benefits! The invader’s bugle is a nasty military horn that can generate freezing sludge and animate the dead…you were asking for a proper trench nightmare? There you go!

Editing and formatting are, on a rules-language level very good and now, in the revised version, the formal glitches have been eliminated with extreme prejudice. Layout adheres to the nice, aesthetically-pleasing two-column full-color standard for Reign of Winter plug-ins. The pdf sports a couple of nice full-color artworks and comes fully bookmarked for your convenience.

Jason Nelson and Victoria Jaczko deliver my favorite treasury in LG’s whole catalog here. I absolutely LOVE the vast majority of the items and adore how they use tropes of folklore, unique twists and generate an incredibly flavorful collection of items. While the original iteration sported several unpleasant hiccups due to something, somewhere, going wrong, the revised iteration is absolutely glorious. Bereft of any serious hiccups, my final verdict for the revised edition will be upgraded to the 5 stars + seal of approval. Get these items!

You can get a bundle of LG’s cool treasuries here on OBS!