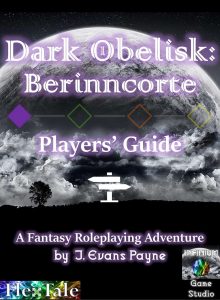 This Player’s Guide for the first part of the massive Dark Obelisk-saga clocks in at 51 pages, 1 page front cover, 2 pages of editorial/KS-thanks, 2 5 pages blank, 1 page ToC, 2 pages of explanations of the peculiarities of this game studio (more on that in other Dark Obelisk-reviews) leaving us with 43.5 pages of content, so let’s take a look!

This was moved up in my review queue due to me receiving a print copy of the book.

First thing you’ll notice: The first content-bearing page pretty much provides quick: “Determine in 10 minutes” basics: Berinncorte is a typical fantasy city of 100 -200 citizens, has library, butcher, etc. Why are the PCs there? up to the players. What do they know? Easy – there’s a rumors table! And there even are 3 quick notes on how to get the action going from the get-go.

So, first of all, the book explains its unique presentation, which may be more relevant for the GM than the players, but it’s still interesting: Taking a cue from AAW Games’ playbook and similarly well-presented adventures, we get handy, color-coded boxes: Obstacles are e.g. in an orange/yellowish box; loot can be found in blue boxes and icons clearly denote the respective components for what they are. When a random roll is required from the GM, a handy dice-symbol denotes the action as such.

Books and knowledge are power: Mundane texts come in their own boxes, with value, weight, etc. and can provide bonuses. Relevant for players: The adventure saga uses skill challenges. Before PFRPG purists start booing – these are not 4E’s “Make x unrelated checks to succeed” type of challenges, but instead codify e.g. persuasion, complex traps and the like: First check catches the target in a contradiction, second presses forward, third nets compliance, for example. The example uses falling timbers: Perception to note, Acrobatics to avoid, and on a failure/to help others, Strength to dislodge – basically, they represent sequential, more complex skill interactions, some of which can fail, while others can send you back a step on a failure, etc. Basically what we have in other modules, only codified more stringently.

An additional thing that sets this apart would be that PCs can be replaced with NPCs – if such a replacement, due to death or the like, would be required or feasible, it is denoted as well in the text. The Player’s Guide also explains the notion of Reward Stars or Candy XP as an alternate means for the tracking of character progression – these basically consist of a variant, non-level-dependent means of tracking character advancement, emphasizing story more over hard numbers. If you’re like me and not a fan of the reward star mechanic, fret not, for the pdf does offer the means to use regular XP instead without much hassle. This is about as much as players necessarily have to know about this, so from here on out, we look at the second chapter, which deals with how to use this.

The town comes with a settlement statblock and suggested hooks for the core classes (but not for those from more esoteric sources). Berinncorte can be used in pretty much every fantasy setting sans big hassle, though the default campaign world assumed would by Aquilae. Theme-wise, we’ll be looking at high ability, low tech NPC capabilities – i.e. there will be PCs with some solid PC levels, but not necessarily troves upon troves of magic items – something I personally enjoy. Another aspect, which doesn’t necessarily feature in the meat of the module, but makes for an interesting feature of the world, would be the tithe: You could call it accurate or cynical or both, but gods in Aquilae demand a tithe and everyone pays – usually 1% of the income, which is more lenient that real life’s tenth. You pray, you pay – the tribute directly ends up at the god’s place, btw. Gods are immortal and wield power, but are not omnipotent or all-knowing – and while the churches of two gods feature in the module, all of these unique characteristics, from the precise nature of the deities to the tribute, can easily be discarded by the GM.

The same goes for the excessively detailed array of factions and organizations that matter: They are depicted with general influence notes, resources, etc., common traits and include strange guilds like the Meatsmiths that want to raise meat prices and have their craft be recognized as an art to the more mundane like Berinncorte’s militia. The factions depicted here go btw. far beyond what actually transpires in the module, featuring private military, bard’s guilds, couriers, divination guilds and the like, adding some detailed information regarding the movers and shakers of the world.

That’s not much on what to actually expect from the AP? There’s a reason for that and you’ll see it in the review of the module. Suffice to say, that’s intentional. On the plus-side, the pdf does something I very much enjoy: It provides a player-map of Berinncorte and also presents the read-aloud text of the “public zones” – like temples, market square, etc. – basically, if the PCs have probably visited the place, they’ll know the lay of the land. The overview map of the settlement (the weakest among all the maps) represents the locales via self-explanatory icons as well as numbers; the detail maps of the locales instead come key-less, just as player-maps should come.

Particularly useful for PCs who are from Berinncorte would be the third chapter, dramatis personae, where the excessive NPC-fluff descriptions and appearance of the more important NPCs of the town have been duplicated for the PC’s edification. These also are often supplemented with well-drawn, original b/w-artworks I very much enjoyed. This would be as well a place as any to comment on the fact that I very much enjoy that Berinncorte is not a heteronormative environment: One NPC angle could have PCs help a gay man come out, homosexual characters exist as both regular folks and badasses…nice plus here! That being said, this also brings me to a gripe I have with this Player’s Guide: You see, while a bit of the material herein HAS been redacted, there is a character in the city that ostensibly is a male, but in fact, is a female in disguise. The text of the NPC in question has been redacted to not spoil this potential reveal. However, another NPC’s text blabbers on and on about how this character is in truth a woman. Not cool. Another aspect to be weary of here would pertain the fact that the descriptions of the NPCs feature information that should simply not be known by the PCs. While quest-relevant information has been redacted, knowing e.g. that a specific character is secretly infatuated with another character should…well. Be secret? In short: there is some information that does not belong in player hands here. Better redacting of that chapter would have been prudent.

Editing and formatting are surprisingly good for a one-man outfit: J. Evans Payne (who has used variants of his name in all functions in the adventure – nice hidden gag) is surprisingly good at controlling his own output, something I really respect. (I suck at editing my own material.) Layout adheres to a relatively no-frills two-column standard with yellowish background. The color-coded boxes help orientation. It’s not a gorgeous layout, but it gets the job done and allows you to see relevant material at a glance. The pdf version comes with a second, printer-friendly version with a white background instead. Nice: Each chapter is marked on the fore-edge of the paper – if you flip through the book, you can thus immediately see the chapter. This is nice, but if you flip in reverse through these marks, you’ll notice that the left-hand side text in these is not perfectly centered. A purely aesthetic complaint, of the otherwise superior dead tree softcover. As per the one day after the release of this review, I have been notified that a fully bookmarked version has been uploaded – now that is an impressive response-time! We get a few nice b/w-artworks, all original, all enjoyable.

So, the first player’s guide by J. Evans Payne does a LOT right: For one, the angle of the module is not spoiled; the public maps/public knowledge section of the city is AMAZING and should be standard for PGs and the lore-sections on factions etc. adds further dimension to the book. I also really like the idea of fluff-only NPC-profiles of well-known characters, if not the precise execution here. If future books redact more sensitive information, that is most certainly amazing.

In short: This sports a few beginner’s hiccups, but also features aspects I consider well-crafted and worthwhile additions to the Player’s Guide formula. This is not a perfect player’s guide, but it most certainly is a worthwhile addition for any group embarking on the Dark Obelisk AP. How to rate this, then? Well, for me, the dramatis personae section, which would have been a perfect way to provide a mnemonic to players (we all know they’ll forget some names, no matter how memorable your NPCs are…), fell flat due to too much information, which represents a pretty big strike against the book, but even taking that into account, this still can be considered to be worthwhile. As such, my final verdict will clock in at 3.5 stars, rounded up due to in dubio pro reo and the low price point ($1 pdf, $5 print + pdf).

You can get this nice player’s guide here on OBS!