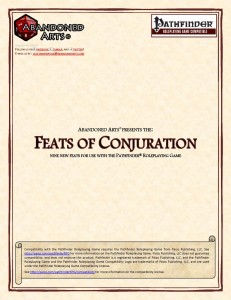 -Barrier Spell (Metamagic):  When casting spells with a casting duration of 1 round or longer, get 3x spell level SR and the same bonus to AC. +1 spell level.

-Dimensional Striker: When using dimensional savant to flank yourself, deal +1d6 damage to each flanked opponent. Nice one!

-Dramatic Teleportation: Impose a -4 penalty on foes witnessing you teleport for 1 minute. That one’s nasty when combined with teleporting items due to the lack of saves…not too keen on it, but still ok.

-Persistent Summons: Your summoned creatures can’t be dispelled by caster levels lower than yours. Cool feat…but take into account the repercussions for your campaign world’s logic. Can become problematic.

-Seething Summons: When conjuring creatures while under the effects of a rage, your summons enter the fray  as affected by a rage spell. Obviously requires moment of clarity. An ok, if a bit weak feat.

-Wonderworker: When casting divine spells of 6th level or higher, you create a vast display tha can be perceived up to a MILE away and fills an area of 50 ft. times spell level centered on the target of the spell. Allies are inspired, foes demoralized for 1 round and adversaries of HD less than the spell level diametrically opposed to your deity’s alignment instead become shaken for 1 round – all sans saves. Per se, a cool idea – but the wonder will turn old fast. the vast visibility range is problematic in my book and the lack of saves is not something I’d enjoy – a longer duration and instead a more limited application could have made this work better.

Editing and formatting are top-notch, I didn’t notice any significant glitches. Layout adheres to Abandoned Art’s 2-column no-frills standard and the pdf has no bookmarks, but needs none at this length.

Daron Woodson has created some unconventional feats herein and the approach to how the respective feats utilize spell-levels should be considered rather interesting. That being said, I also have the notion that the feats tend to be a tad bit off on the balance scale  -not by much, mind you, but still – some feel a bit weak, whereas others (especially Persistent Summons) can alter the internal logic of your whole campaign. While not broken per se, I hence can’t rate this the full 5 stars and instead will settle on a final verdict of 4 stars – a solid pdf, though one that should see close scrutiny by the prospective DM.

You can get these feats here on OBS and here on d20pfsrd.com’ shop-