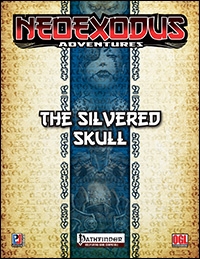 All right, still here? It is the summer of 92 AU in the Caneus Empire when two shepherds named Adler (German for eagle, btw.!) and Karl finds a weird silver skull and a ring in an old laboratory. Gifting the ring to his beloved and showing off the skull’s weird glow, the shepherd inadvertently has found remnants of the Cavian Empire. Cavians, in case you didn’t know, are the mouse-like hive-mind possessing humanoids with innate psionic powers of the NeoExodus-setting. And yes, this is a full-blown psionics-module, compatible with Dreamscarred Press’ Psionics Unleashed. But back to the topic at hand – strange things started happening: The town’s women started acting strangely, some of them even falling into a kind of coma. The town’s priest committed suicide and poor Adler and his skull have been quarantined. Enter the PCs, in the employ of Sir Otto von Korrien.

On the road to Oldenhaffen from Macawi the PCs have to defeat 2 ogres. There, the local remaining priestess Sister Fritzi has already identified the skull as not the origin of the curse – essentially, it converts spells, but not psionic powers, cast on it into light-spell like effects and is completely harmless. After a short, very rudimentary investigation, the players are led to and the proceed to explore the cavern containing the Cavian complex. Alas, the place is now home to a selection of deadly threats – from the quill-furred, dog-like razorfiends, faulty deranged trepanners to finally finding aforementioned beloved woman – with the ring that actually is the source of the problems, for its is an intelligent weapon created to destroy the Sorceror-Kings of Abaddon in ages gone by. Either by combat (with summoned thought-eaters) or by diplomacy, the PCs can get the ring and lift the mental static “curse” on the town. This is not where the module ends, though – whether the PCs hand over the ring to Cavians or keep/destroy it – the choice is up to them and may very well have unforeseen consequences in the future.

We get passable maps for the complex as well as the overall place on the continent where the adventure is set.

Editing and formatting are top-notch, I didn’t notice any significant glitches. Layout adheres to NeoExodus 2-column full-color standard and the full-color artworks are neat. the pdf comes in a second more printer-friendly version. Cartography is nice and actually better than in older NeoExodus-adventures and the pdf has no bookmarks, but at this length, they are not strictly required.

J. P. Chapleau has created a nice module steeped in NeoExodus-lore here – while at this length, we of course get no epic narrative, but what we do get is a nice little crawl that has some social interaction, interesting terrain features and a climax that does not necessarily boil down to “kill em all” – what more can you ask for in a short “Pay what you want”-module? The answer is: Nothing. An enjoyable read for an unbeatable price, my final verdict for this module will clock in at 5 stars +seal of approval.

You can get this module for any price you want here on OBS!