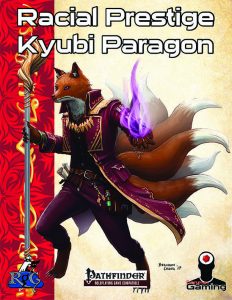 This installment of the Racial Prestige-series clocks in at 17 pages, 1 page front cover, 1 page editorial, 5 pages of SRD, leaving us with 10 pages of content, so let’s take a look!

If you’re somewhat of a Japanophile, you’ll certainly appreciate the pdf specifying the origin of the word “kyubi” as a bastardization stemming from “kyuubi no kitsune” – and btw., if you’re looking the currently by far best take on the kitsune race as a proper race with options galore, be sure to check out the Dynastic Races Compendium.

Anyways, let’s move on to the racial paragon class: To qualify, you must be a kitsune with the Kyubi Awakening and Magical Tail feats and either have 5 ranks in a skill, BAB of +5 or higher or the ability to cast 3rd level spells. The class nets 4 + Int skills per level, nets no armor or weapon proficiencies and a 3/4 BAB-progression as well as no good saves. It should be noted that, at 3rd level, you get to choose two saves and gain +1 in them, which increases to +2 at 9th level, evening out at two medium save progressions at the higher levels.

The Kyubi Awakening feat, just fyi, nets you a kyubi trick, though you still have to meet the prerequisites of the trick.

Here’s the thing, though – Everyman Gaming Racial Paragon PrCs have a so-called aligned class: Upon taking the PrC, you select one class and treat kyubi paragon levels thereafter as though you had progressed in that class for the purpose of its class features. This cannot let you exceed your character level, though, and does not yield new class features that would have been gained: Basically, scaling abilities are not crippled by taking the class, which is something I enjoy. In case you were wondering, the class nets Magical tail as a bonus feat at 2nd level and every 3 levels thereafter, with alternate choices being covered as well.

The class begins play with a so-called chakra reservoir equal to 1/2 PrC level + the number of Magical Tail feats possessed. As a swift action, the kyubi paragon may expend a number of such points to cast a spell-like ability gained from Magical Tails or use a kyubi trick without this counting against the daily limit of that SP. The cost is equal to the spell-level duplicated. The reservoir replenishes after rest. The astute reader may have noted that this allows for some serious action-economy tricks, which is pretty potent from the get-go.

Starting at 3rd level, the paragon may spend 1 point from this reservoir as a swift action accompanying the casting of a Magical Tail SP or kyubi trick to add the benefits of Conceal Spell, with 8th level unlocking the option to spend 2 such points to gain the benefits of Improved Conceal Spell. Furthermore, 3rd level and every 3 levels thereafter unlock a Metamagic feat chosen from a list, which can hereafter be applied to the SPs and tricks, but at the cost of a number of points equal to the spell level increase of the feat in question, minimum 1.

Now, I have been mentioning kyubi tricks before – these basically constitute the talents of the class and the first one is gained at 1st level, with an additional trick every 2 levels thereafter. They are categorized and differentiated further by being grouped in tail-categories: There are tricks that require 2, 5 and 9 tails to learn. Saving throw-wise, we use either 1/2 HD or spell-level to calculate the saves, with Charisma being the governing attribute for these tricks. The kyubi tricks allow for a variety of different options: From improving upon Realistic Likeness with benefits of vocal alteration and more control over age, height etc. to using Occult Adventure’s Chakra system to disguise other, point-powered Arcane Strike, rogue talents to gliding and gaining darkvision, these are interesting and sufficiently versatile. It should be noted that all those examples were from the first category of kyubi tricks, for the talents differentiate between 2-tail, 5-tail and 9-tail tricks . guess what the prerequisites for taking them are. Yeah, self-explanatory.

Using tails for simple tasks, gaining Psychic Sensitivity or the ranged legerdemain feature rank among the more intriguing ones and the strong leitmotif of magical trickster is also represented by the potential to gain access to ranged legerdemain.

Starting at 4th level, the class gains the shapeshift shaman hex, using the aligned class + PrC levels as shaman level and is treated as a racial shapechanging ability for the purpose of ability interaction. This is relevant, since quite a few kyubi tricks blend the shapechanging and trickster themes, offering e.g. a means to greatly increase the chance to escape bonds via shapeshifting or use shapeshifting while in your natural form to temporarily adapt to e.g. water etc.. Similarly, at higher levels, we do get the more potent plant/vermin shape and form of the (exotic) dragon/giant form options added to shapechanging with the right talent. And yes, the level prerequisites/unlocks of this trick make sense. Similarly, the potent Acrobatic Pounce is well-placed with an additional minimum-level caveat.

It should also be noted that the 5 tails-option potentially ties in with the Everyman Mini: Kumiho, allowing you to assume kumiho or pipefox shapes, with all required rules represented herein. Quick change and reservoir-based telekinesis can similarly be found. The highest-level and most potent of tricks, from screen to constant greater age resistance, are obviously the 9-tails options. Speaking of age: Really cool: We get modified age tables for kitsune with more than one tail! See, that is really thinking through the subject matter, going the extra mile. And before you’re asking: Yes, you can gain an extra kyubi trick via a feat introduced herein. For your convenience, the contagious suggestion and form of the exotic dragon-spells have been btw. reprinted here, so no, you do not need those Player Companions to get all out of this pdf.

The class has more to offer, though: At 2nd level, the kyubi paragon chooses the embodiment he wishes to pursue – this choice cannot be changed once made and determines the abilities gained at 2nd, 6th and 10th level. 3 of these are provided: The Embodiment of magic allows the paragon to continue gaining new spells with the aligned class, allowing for basically 9/10 spell-level progression, with 6th level allowing for the use of chakra reservoir points in conjunction with the spells of the aligned class, which is VERY potent, even at 11th level, the earliest you can have it. This is thankfully balanced by double costs for doing so, reigning in the ability to strong, but sensible. The capstone here provides the option to employ multiple Metamagic feats in conjunction with his options. The Embodiment of might turns the class into a full BAB one with d10 as HD and also provides either a bonus feat or proficiency with all simple and martial weapons. 6th level nets a further bonus feat and makes PrC-levels count as fighter levels for prerequisite purposes and as a capstone, we have transformation for 3 points.

The third embodiment, embodiment of skill, nets 8 skill ranks at 2nd level and an additional +4 at every level thereafter. Additionally, if he’s trained in a skill or uses an ability check, even if it’s not his turn, the paragon can expend a point from the reservoir to add PrC levels as an insight bonus to the check – even when taking 10 or 20, but the decision must be made beforehand. 6th level allows for a reroll instead and allows for the use of all skills untrained (and the reservoir-based boost on them, conversely, may also now be used on untrained skills). The capstone lets the paragon take 10 or 20, even when prohibited from doing so, but at the cost of chakra reservoir points. These embodiments are genius, as they actually make the class feasible for pretty much all base classes – big kudos there!

One final thing to mention: At 4th level, the kyubi paragon gains the racial paragon vigilante talent, using class level plus aligned class level as vigilante level. He gains this talent a second and third time at 7th and 10th level, respectively. What does this talent do? Well, as a move action, the vigilante can gain access to a chosen feat that corresponds to his race for 1 minute, but still must fulfill the prerequisites. This can be used 3 + 1/2 vigilante class level times per day, with limited use feats taking away from the uses of the talent instead. Taking the talent additional times, the character may choose to either get one more racial feat or decrease the action required to activate the ability. Big kudos: This gets duration, interaction of wildcard feat-trees etc. right.

Editing and formatting are top-notch on both a formal and rules-language level. Layout adheres to Everyman Gaming’s two-column full-color standard and the full-color artworks are nice indeed. The pdf has no bookmarks, but doesn’t necessarily requires them at this length.

Alexander Augunas’ kyubi paragon is AMAZING. A) It is feasible for all types of character. B) It represents the iconic trickster style of the kyuubi no kitsune better than any other take on the trope I have seen so far and c), it does so while also providing a distinct and rewarding resource-management mechanic. In short: If there were more PrCs of this caliber, they wouldn’t have such a bad rep. The balancing is also rather precise, with the limited resources putting hard and sensible, but not crippling caps on the most potent of tricks available. In short: 5 Stars + seal of approval, given sans hesitation.

You can get this amazing PrC here on OBS!