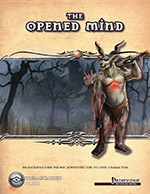 This module clocks in at 25 pages, 1 page front cover, 1 page editorial, 1 page SRD, 2 pages of advertisement, leaving us with 20 pages of content, so let’s take a look, shall we?

First things first – this is intended as an intro-adventure to psionics, so went in without expecting it to produce exceedingly complex or odd storylines. 2 pages providing a total of 4 sample pregens are provided for the convenience of players and DMs alike. This module can be used in conjunction with the Third Dawn-setting, but is not limited to it.

All right, still here? The town of Jace’s Stanchion has a colorful past – when settlers came, they befriended a race called hanoshafyr, a peaceful tribal people and subsequently discovered psionically-conductive phrenoric ore, which they mined to use in lieu of metal. Alas, as often, when one mines, one risks the danger of wakening something horrible and indeed, the evil that burst forth from a submerged complex proved to be formidable – only due to the massive power and sacrifice of Jace, the town’s leader, could the tide be stemmed. Alas, as often, the wards are crumbling and require maintenance – in the form of psionically gifted individuals that now sacrifice themselves to keep the degrading containment functional. Worse, the rather nasty ruling family has started abducting outsiders, with the erstwhile peaceful hanoshafyr having been driven insane, but still maintaining a distance from psionically-endowed individuals.

This is important, for the PCs are assumed to be caravan guards and the very first encounter is a CR 6 monster – the hanoshafyr assault and slaughter the caravan’s men, but only deal nonlethal damage to the psionic PCs – whether “saved” by the “good” folk of Jace Staunchion or escaped to the village out of their own strength, the PCs are stranded. From here on out, the short gazetteer provided for Jace’s Staunchion and the rather detailed tables that reward legwork and investigation of town and creatures. It should be noted that the production values here are superb – not only do we get a glorious full-color map and village statblocks (and notable locations etc.), the notable NPCs herein ALL get their own full-color mugshots. This is definitely impressive.

Speaking of which – the town’s dark secrets managed to elicit a sense of slowly creeping, palpable threat that hearkened, at least for me, back to slowly unearthing the rituals in the Fatal Frame/Project Zero-series of games, with ample and multiple skill-uses that can be used to glean information. Eventually, the PCs will want to investigate the local mine, where, should they pass the racist sibling guards and the alarm traps, they may start to piece together – they may free a still-living unfortunate from the pillar of phrenoric ore and witness the oblation, the strange wall of ectoplasm themselves while also linking the seeping nastiness with the madness of the hanoshafyr. Confronting the ruler about the lull-like memory modification in town and the strange things they witnessed in the mine, the PCs will have to defeat the powerful man – and decide where to go from here. The barrier, the customs, the powerful ruling house, the mad hanoshafyr – there are so many ways to spin this story, it should not be an issue to devise your own plots here.

The pdf also sports the monster-entry for the hanoshafyr and the psionic items used in this module.

Editing and formatting are top-notch, I noticed no significant glitches. The pdf comes fully bookmarked for your convenience and sports a HUGE amount of glorious, original full-color artworks; more than I’ve seen in many a 60+-page module! Layout adheres to Dreamscarred Press’ two-column full-color standard. The cartography in full-color is also absolutely stunning, though I wished we got player-friendly versions of the maps sans those annoying numbers and legend. I hate having maps with “hotspots”. The pdf comes with a printer-friendly, second version – nice!

Okay, I did NOT expect this. I expected a bland little intro-adventure; you know the kind – kill a couple of orcs, slay the shadow/ogre-boss, done. The usual intro-adventure blandness that provides handholding and is just boring. This is the rebuke and anathema to all such modules.

Author Eric Hindley with Dave Harris, Jeff Lee, Josef Shindler and Paul Gazo has crammed into the few pages herein more local color, more diversity and more excitement that I’ve seen in quite a while. With dangerous combats, thrilling mysteries and a great combination of challenges, from combat to social, we receive a thoroughly compelling, inspiring mystery that practically DEMANDS sequels – it’s that good. With the cool gazetteer and top-notch production values, the formal criteria are awesome, but they pale before the exciting narrative. While the module is challenging, it also is not overbearing or overcomplicated and, ultimately, is triumphantly psionic. It effortlessly manages to *feel* different in its execution, focus and leitmotifs. The Opened Mind blew mine; I did not expect this module to not be bland, much less expected it to actually captivate me and render me this excited! If this pdf did one thing, then it made me crave more mysteries and modules from Eric Hindley and this team – this is a stellar, inspiring psionic module and well worth a final verdict of 5 stars +seal of approval. Seriously, get this – it’s pretty much a by-the-numbers example of how to craft an intro-module that is NOT boring.

You can get this awesome 1st-level module here on OBS and here on d20pfsrd.com’s shop!