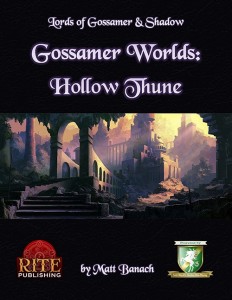 What happens if Edward Bulwer-Lytton’s thesis in Vril, The Power of the Master Race, of a subterranean master-race and their quasi-mystical super-technology was set against a backdrop of genocidal struggle between two competing races and then combined with a classic “you dug too deep” twist, unleashing dread Erebi on the genocidal victors of the struggle? We get one messed up setting. Add to that a sprinkling of hollow earth and H.G Wellsian Time Machine and we have even more of a mess – in the ruined, desolate planet (swallowed by a titanic shadow-like…thing, slowly breaking the world asunder) and its tunnels, survivors, ranging from degenerate morlock to the last surviving racist Übermenschen (the pdf gets the plural wrong – you add –en in the end), fight their desolate and doomed battles against reality-annuling aliens led by a Slenderman-esque figure, while an undead umbragunt may be the last champion of a planet doomed to die.

Hollow Thune is not a nice place, and if the above wasn’t enough, the writing and narrative voice further drives that home – essentially, the pdf not only borrows Bulwer-Lytton’s terminology from another age, but in the emphasis on Germanic Nomenclature and the quoting of concepts like the Black Sun, draws less than subtle parallels with the popularized notion of the Thule society’s mysticism, thus adding a nasty sense of gravitas to the whole setting.

That being said, as a German, I sometimes tire of the whole imagery, mainly since we’re bombarded with the atrocities of the Third Reich in both school curriculum and media and I have a hard time separating games and fun and the popularized stereotype of the Nazivillains from the gruesome realities of history. This pdf made this particular component relatively easy on me – with the clear condemnation of the socal-darwinism exhibited by the destroyed races of Thune, with the clear pointer not at the Third Reich, but at the intellectual streams that existed in literature, culture and intelligentsia of all fields, the pdf manages to evoke the themes, but do so in a thoroughly unique manner that is at once creative and still, very clear in the themes it quotes.

Matt Banach’s Hollow Thune could have devolved into an utter mess in the hands of a lesser writer – I have literally seen all components that make up the defining elements of this book in multiple cases, have read Bulwer-Lytton and thanks to my keen interest in history, I am pretty well-versed in the atrocities committed by different nations. Hollow Thune still manages to keep these together, to toe the line between the horrific and fantastic, never falling into the realm of tastelessness. And for that, I applaud it. The whole setting even would make for a great Dark Soul-ish background of a desolate world you slowly explore, a world of lethal adversaries…and once again, I find myself wishing, that this Gossamer World had more room to shine. Oh well, as provided, we get a great installment in the series and yet again, a verdict of 5 stars + seal of approval.

You can get this dark, unique world here on OBS!