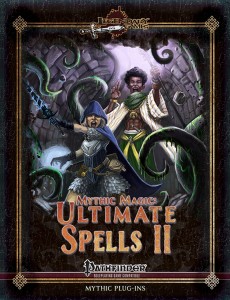 This installment of the Mythic Magic-series clocks in at 52 pages, 1 page front cover, 1 page editorial, 1 page SRD, 1 page ToC, 2 pages of introduction, 2 pages of advertisement and 1 page back cover, leaving us with 43 pages of content, so let’s take a look!

So this would be the fourth installment of Mythic Magic, and, like its predecessors, it tackles one of Paizo’s big books and provides mythic versions of all spells not covered in the original Mythic Adventures hardcover – ALL OF THEM. This time around, Ultimate Magic is covered. Now I’m not a fan of the base book. I think that it introduced a lot of power creep and some not so awesome design decisions, but that’s for another rant – I love its magus and for the purpose of this review, I’m going to ignore all of that and instead only and exclusively focus on the way in which the spells therein were advanced to mythic levels. Got that? Awesome.

So, as always, we kick off with a massive alphabetical list of the spells herein before diving into the meat of the matter – more mythic spells! As you may be aware, numerical escalations, while part of mythic design, are not necessarily what impresses me, neither does adding conditions – like in the acid spray-spell. However, the spell turns interesting immediately upon the realization that it also duplicates a hydraulic torrent-like crowd-control effect, adding a new tactical component to the spell. Now don’t get me wrong – mythic tier bonuses and e.g. new senses (like your choice of darkvision, low-light vision scent, etc.) are solid craftsmanship – but when I can e.g. dismiss my bard’s mythic allegro to reroll a ref-save or dex-check, I consider that much more interesting.

If you enjoy using your magic to make anthropomorphic animals, you’ll probably also like the option to add in weapon/armor-proficiencies from the get go, but optionally channeling energy via bestow grace of the champion just is more interesting, especially when combined with the mythic power based optional modifications of the spell’s numeric parameters. Anti-stealth nettles or blood mist that may be used to detect invisible targets? Heck yeah, why not, especially since their secondary effects thankfully keep them distinct from one another. On the extremely nitpicky end of the spectrum – I love the idea of implanting a suggestion in a construct as part of control construct, but per default, the monster type is immune to mind-influencing effects – while it is clear that the spell is supposed to represent an exception to the rule, the issue remains and should have called for an explicit exception to the rule.

I’d also like to applaud those mythic spells that offer an interesting “insult to injury”-trick – like corrosive consumption, which can, via mythic power, be targeted at once at a creature AND one of its possessions. Making curses hereditary is also a neat option, though I personally prefer legendary curses as pioneered by Rite Publishing for powerful, odd curses, but your mileage may vary – nothing bad about the simple solution presented herein for mayor curses. Now on the plus-side regarding these curses, generating multiple possible triggers for the curse of disgust makes for a more varied and versatile cast – and a more interesting roleplaying device – just contemplate the PCs escorting someone subject to such a curse, with no idea of the potential triggers… Adding a disease to eruptive pustules is downright sadistic and right up my alley, though I wish the spell had included a way to choose the disease by expending mythic power dependent on the disease’s severity. Now haunting mists potential for vastly expanded AoE combined with its wis-seeping properties has some massive narrative potential – even though, perhaps that’s just the Ravenloft-DM chuckling in me. 🙂

On the interesting side of things, this time around we can find synergy-effects with spellblights herein alongside environmental-protection interplanetary travel – so your PCs don’t die immediately upon jumping to the wrong planet… The mythic Greater Interrogation enables your PC to utilize progressively worse fear upon those unwilling to cooperate until their fear makes lying impossible – provided they are not too frightened to articulate anything… Action economy wise, casting lend judgment as part of initiating a judgment makes for a cool option, especially since you can maintain another judgment than that you have temporarily outsourced to your ally. The greater version is even more brutal – it nets ALL judgments. Yeah. Ouch. Speaking of ouch – Polar Midnight: Three steps decreased lighting conditions, cold damage sans save to negate, dex-drain that can be decreased to only 1 AND icy prison minus air to breathe for anyone who doesn’t move. Yeah…that may be a bit much, even for high level mythic magic.

On the iconic side, using mythic primal scream as an immediate action to cancel paralysis and enchantments makes for some flexibility and tactical depth and modifying the size of simulacra also is something I liked to see. Mythic shadowbards can execute outro-style spells that end bardic performances for you and skinsend‘s mythic upgrade helps render the skin-form more unique in its defensive capabilities. Beyond a spellblight addition, mythic power can now be used to power steal voice fully, as it ought to be – remember Ariel, the little mermaid? Yeah, NOT fun to be mute, especially if the thief can use your voice for all kinds of shenanigans … That#s the level of awesome I love!

Summons can generally be upgraded via mythic simple templates for solid additional tricks, as are unholy walls of ice and I like the synergy of unholy sword interacting with fiendish boon. Virtuoso performance allows bards, via augment, to potentially maintain 3 (!!!) bardic performances simultaneously. Free action shifts of witness? Now this is investigation gold and something your PCs will love if they tend to favor complex plans and operations as much as mine do!

Editing and formatting are almost top-notch, I noticed so significant glitches. Layout adheres to Legendary Games’ two-column full-color standard with most of the artworks being familiar to legendary Games-fans. The pdf comes fully bookmarked with teh spell-list by class oddly at the bottom of the bookmarks and a couple of them listed again after the alphabetical list – since this does not impede the use of the existing bookmarks, no issue. The pdf comes with excessive hyperlinks, though they are not always uniform, with e.g. some spellblights hyperlinked while others aren’t – still, generally, a user-friendly, massive book.

All right, I’ll just come out and say it – Jason Nelson simply didn’t have as much to work with in this book as in Advanced Spells I or Ultimate Spells I – this is not due to incapability by the designer, but rather due to Ultimate Magic simply not doing much that can be considered interesting with its spells – less interesting utility/terrain-control options than in the APG, no concept like e.g. communal spells as in UC to work with. Considering that UM’s spells inho more often than not focus on numerical escalation, the amount of variety provided herein is surprising. That being said, the general enhancements provided do, by necessity, more often than in the spells since the first mythic magic, depend on relatively linear progressions of existing capabilities – there’s nothing wrong with that, but as a result, I was not utterly blow away by this book – at least not to the extent as its predecessor. That being said, the pdf sports less glitches than the first Ultimate Spells book.

My final verdict will hence clock in at 4.5 stars, rounded up to 5 for the purpose of this platform – with one caveat: If your mythic campaign uses Ultimate Magic, this can be considered a must-buy supplement that closes a vast rules-gap.

You can get this all but required pdf for mythic campaigns here on OBS!