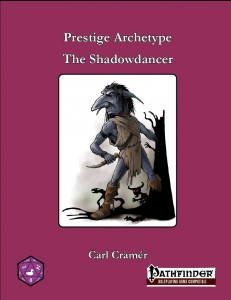 Shadowdancers as a 20-level class receive d8, 6+Int skills, 3/4 BAB-progression, good ref-saves , proficiency with simple weapons, hand crossbow, rapier, shortbow, short sword, sap and light armor. They also begin play with sneak attack and increase sneak output by +1d6 every odd level to a maximum of +10d6 at 19th level. Shadowdancers receive trapfinding, evasion – the deal, and hide in plain sight at 2nd level. Yeah. Second. Level. While it requires 5 ft proximity to shadows, 10 ft. starting 5th level, that is VERY soon. If you play stealth by the book, that may be too soon – around 5th level makes for a better place for an ability this powerful, especially since it’s not the terrain-based rogue variant, but rather the one that only requires shadows..

The base-class receives dodge at 4th level (yay?) as well as evasion, darkvision at 6th and mobility and improved uncanny dodge at 8th level (again, yay for mobility…).

At 10th level, the class becomes interesting, receiving a shadow pool equal to cha-mod (min 1) + 1 per level beyond 10. These points can be used to use silent image as a spell-like ability and every even level, a SPELL is added, with diverging point costs – while I *assume* that ought to be spell-like abilities, the pdf calls all but the first SPELLS – a massive glitch. Slippery Mind is as expected and the option to combine shadow step with stealth is a nice trick, especially since it’s upgraded further later on. The capstone is essentially an apotheosis and yes, the iconic defensive roll is gained appropriately late, at 18th level.

The pdf provides FCOs for the core races and sample NPC-builds at 1st, 5th, 10th and 15th level.

The shadowdancer is a weird class in that I always liked its flavor, but never the execution – it always felt subpar, bland – and the more sneak-themed shadow dancer herein is probably the better class, in spite of its minor rules hick-ups – the problem is, though, that by now both Rogue Genius Games’ Shadow Assassin and Interjection Games’ Edgewalker simply make for the more versatile, more unique executions of the concept.

Now don’t get me wrong, Carl Cramér has done a neat job with what he had and I’ll review this pdf under these circumstances, but the late auto-gains of weak feats, the ridiculously fast hide in plain sight, the flawed shadow pool – all of these conspire to somewhat drag this down. This is by far not bad, but neither is it awesome. My final verdict will clock in at 3.5 stars, rounded down to 3 for the purpose of this platform.

You can get this solid Prestige Archetype here on OBS and here on d20pfsrd.com’s shop!
Endzeitgeist out.