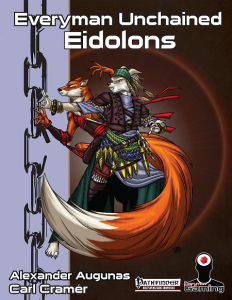 This installment of Everyman Unchained clocks in at a massive 50 pages, 1 page front cover, 1 page editorial, 4 pages of SRD and 1 page advertisement, leaving us with 43 (!!!) pages of content, so let’s take a look!

Or rather, well, before we do, let me state that this book was a ton (no, really!) of work, but also one I truly appreciated. When i began reviewing the Everyman Unchained-series, I had to cover basically everything…and compare the individual builds with Purple Duck Games’ takes on the same concepts. Which turned reviewing these into a comparative nightmare. Worse, from a reviewer’s point of view, the two approaches taken diverged significantly. Wherein Alexander Augunas stuck close to the original archetypes and options when designing and thus managed to attain a close proximity to the non-unchained material, Carl Cramér took the opposite approach and provided free-form designs, tinkered with core mechanics of archetypes beyond what was necessary, etc. As a reviewer, perhaps even worse, both authors actually did really good jobs and arrived at completely different results -and in the end, I loved some of Alex’ designs more in some cases, while preferring some crafted by Carl in other instances.

So I did what I am wont to do when I review something that is simply brutal, dry comparative reading and analysis – I bitched and moaned…and the authors heard me. This book, thus, can be summed up as these two designers joining forces to take a look at the eidolon of the unchained summoner – granted, a creature that received a rather overdue nerf, but also an extremely restrictive narrowing of its possible applications. It is thus that this pdf seeks to expand the options available for unchained eidolons and maintain the established balance of the base forms of Pathfinder Unchained. A total of 8 such new base forms are provided: Aquatic, Avian, Cactus, Conifer, Horror, Mushroom, Tauric and Tree. The base-forms, generally, are well-crafted and on par with the power-levels of the three defaults established in PFU.

The pdf, obviously, does not stop with the customization options for eidolons at a few new base forms – instead, this pdf provides a HUGE, and I mean HUGE assortment of eidolon evolutions. But how do you maintain balancing with such an expansion of options while also staying true to the general mission of making this more variable? Well, you tie certain evolutions to eidolon subtypes – more so than in the defaults in PFU: Limited fey magic, construct materials (accompanying tables with material -> associated Craft skill), advanced alchemical golem effects, speed surges for draconic sept eidolons ad feasible minimum level requirements render eidolons so much more than they honestly were before: With options to gain bloodgolems or carrion golems (or any other material – from ice to clockwork to junk) to diseases, capsizing vessels or getting a tiny eidolon to 12th level-prereq’d strangle and even multi-headed breath weapons, the array of options herein is staggering, up to the point where the general presentation reaches a level of customization that is pretty hard to do within the confines of the non-unchained version…without falling prey to its cheesing tricks.

The subtypes of outsider available for eidolons as depicted in PFU may have covered a lot – but it was by far at no point an extensive coverage. This pdf remedies that by going into the details – whether it’s the mephit, oni, kami, aeon, qlippoth or manasaputra, the respective types can be considered not only to be thematically appropriate – they are also balanced against one another while maintaining distinct thematic identities. This devotion to customization also extends to the aberration-themed eidolons – from lurking rays and gibberers to mutants and aliens, these feel different enough from the previous ones to really make you salivate. Animal-themed eidolons, from elemental-infused animals to shadow beings and constrcuted ones, from golem and animated objects and robots to draconic eidolons, this pdf covers a huge and extensive breadth of options…and yes, the latter does sport dragonoids, imperial dragons, primal dragons. Fey sport a broader categorization between beautiful, fearsome and trickster-themes, while taking a giant eidolon, one molded after dark folk or trolls, bandersnatch-themed ones or ones shaped after hydras also becomes well within the realm of possibility with these.

The classic ooze-commander also is covered in various ways and includeds puddings, gelatinous eidolons or even fledgling shoggoths, while Thriae and Doppelgängers wait in the wings only a few pages away. Beyond those gaining plant-based fungoid eidolons (creepy!) or making them from the dismembered dead, i.e. the creepy life-death-axis, is covered as well. Via base form, alignment and generally well-placed ability progressions that oscillate between evolution pool-modifications and a metric ton of unique options, the balance of the respective forms, surprisingly for a book of this size, works rather impressively well, with type skill-list and similar general rules providing additional means for control, and, if required in a given setting, GM-adjustments.

Editing and formatting are top-notch, I noticed no significant or glaring hiccups herein – apart from one: The kyton subtype is missing the 8th level ability – credit where credit is due: While I did go through the whole book looking for missing abilities etc., it was Eric Hinkle who first brought this one to my attention. Layout adheres to Everyman Gaming’s two-column full-color standard with a blend of classic and new full-color artwork. The pdf comes fully bookmarked for your convenience.

Alexander Augunas and Carl Cramér joining forces has worked actually exceedingly well in this book: The complex concept, all about the balance of the mechanics, sports Alex’s trademark care, while also featuring Carl’s often slightly more expansive modification tricks. The balancing of these options is certainly smoother than those of the non-unchained summoner’s eidolon ever were. This does have another achievement it can tout, though.

One that is more important, at least to me – by virtue of its extensive types and options, it redefines the notion of what an eidolon should be. Instead of a wobbly, fluid and strange being, this pdf offers a staggering array of thematic and rules-identities that can inspire the reader by virtue of their sheer presence. That Jack the Ripper style serial killer? Perhaps he is just collecting parts for his dismembered eidolon! Even in low magic or gritty (or very lighthearted) contexts that made eidolons feel a bit odd before, they can now work – they are embedded in the respective world rather than an odd class-feature-afterthought, making the very notion of having such an eidolon infinitely more compelling, at least for me.

Beyond the sheer expansion of option, this book reevaluates the identity of the eidolon and presents a thoroughly compelling take on the subject matter with flair and panache, while also retaining a sense of the DIY-aspect that proved to be one of the most compelling components of the original class. In other words – this is pretty much the best summoner book I know of for PFRPG, a must-own book. How good? Well, my players were pretty disillusioned with the unchained summoner’s restrictiveness. Since I presented this book, they actually want to play the class. I know that I could have gone into the nit and grit of the respective types – but ultimately, I think that would have done this pdf no justice. unlike the previous class-focused Everyman Unchained-books, this one simply is no “pick yours, forget rest”-offering that happens to contain your archetype, now working for PFU.

This should be considered to be the most concise eidolon-toolkit written for PFRPG so far…and frankly, this book is an excellent reason to rebuild your classic summoner with the unchained rules. With excellence like that, who would I be to complain about this book? My final verdict clocks in at a well-deserved 5 stars + seal of approval.

You can get this massive book of eidolon-options here on OBS and here on d20pfsrd.com’s shop!