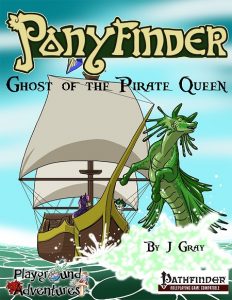 Wait, before we do: This is an adventure-review and as such, it contains SPOILERS. Potential players should jump to the conclusion.

All right, still here? Great! When ponykind tells stories of dread beings around the campfire, sooner or later, the notorious pirate queen Brokenhorn is mentioned -an unicorn whose eventual trial was judged by none other than the queen herself. After breaking from jail, she pulled off the caper of a century…and then vanished. Until now. The module begins in the port city of Kailani (no settlement statblock reproduced, alas), famed for its metal production and assumes that the PCs have been hired to deal with a mine taken over by gem gnolls. It is here, that it becomes apparent that this not only is a Ponyfinder module, but also one made by Playground Adventures – throughout the module, you’ll find handy boxes providing GM tricks aimed for younger audiences: From using the opportunity of roleplaying to improve math skills to championing non-violent solutions- turns out that the ponies have been inadvertently poisoning the gem gnoll’s tunnels with their mining operation – and savvy ponies will be able to provide an amicable solution for all parties involved. Of course, combat or trickery similarly are options and yes, some educational notes on copper are provided.

In the aftermath of all of this, the PCs will find a (simple) puzzle box that can easily be simulated with cards, coins and the like – it’s a classic “all adjacent crystals light up” puzzle and inside, the PCs will find a treasure map with a riddle – hints for said riddle are optionally written into the very dialog options used for the zebra captain whose ship the PCs are likely to use to get to sea…but not before an unicorn called Demi Charter tries to buy their map. The crew of the vessel is depicted in fluff-only brief paragraphs, but should provide enough dynamics for roleplaying during the journey…and the module does provide a nautical term/pirate slang glossary, which can help build specialized vocabulary for the players. The vessel is statted properly and while ship to ship combat with an enemy vessel is a distinct possibility, the module does not assume the use of nautical combat as a given, instead noting that younger players may enjoy a more narrative take on the subject matter.

Speaking of which – it turns out that Demi Charter is trying to board them – possessed by Brokenhorn! While capable PCs will be able to bring him to reason, ultimately they will be warned that the treasure hunt is not a simple task. The map of the treasure island sports three Xs, but knowing how pine cones interact with heat can help deduce which one is the correct one. The complex of Brokenhorn, hidden below, is fully mapped and features pitting the PCs against an illusory double of the famed pirate and past bone organs…which may be a bit creepy, but considering the wholesome tone of the whole module, I’d be surprised to hear about even sensitive kids being scared here. While exploring the complex, the PCs will also be cast in other roles, as haunts take them into Brokenhorn’s memory: Here, the PCs will be faced by a nice and relatively easy alchemical deductive logic puzzle and in the aftermath, the PCs will be filled in by the spirits of the memories regarding Brokenhorn’s ambitions and past. The use of the player’s faculties will continue, as another haunt features a nice substitution cypher of the simplest kind (Even when run in other languages, the cypher makes translating the puzzle easy.) – it turns out that phantoms here takes the PCs to put Brokenhorn’s ghost to rest – the pirate queen never actually killed anyone; that was just embellishments that grew over time (nice way to teach kids a bit of skepticism!) and the ghost, while dangerous, deserves being put to rest – if the PCs prevail, they’ll end the module with a heart-warming scene and Brokenhorn’s unique horn as an item as reward. The pdf concludes with a list of recommended/further reading regarding pirate narratives.

Editing and formatting are very good – apart from very minor hiccups like a “/” missing in the multiclass statblock and similar, rare trifles, the book is precise and to the point in both formal and rules-language and well done. The layout crafted for the book is gorgeous and provides a great 2-column full-color experience. The pdf’s artwork in full color is similarly nice. I really like the colorful cartography provided for the “dungeons” featured within, though I wished we’d get player-friendly key-less versions for them.

J Gray, with assistance by Stephen Rowe, has crafted a great module – there’s no two ways around it; how great, however, depends a bit on the facet under which you examine the module. As a ponyfinder module, this excels – it uses everglow canon and places well and knows the themes of Ponyfinder. As an educational module with a kid-focus, this similarly excels – the emphasis on wholesome conflicts, diplomatic solutions and the use of kid-appropriate puzzles that engage them without being too hard is great. Theme-wise, I’d suggest this for kids ages 4 – 10 – older kids may consider the puzzles too easy, depending on how smart they are and young gamers in puberty will probably want more violence than this offers.

Adults who want a change of pace will enjoy this, though they won’t consider it too challenging and rather easy. As a pirate module, it hits all the notes from ship-to-ship combat to treasure hunting – but here, it is slightly less excellent. What do I mean by this? The treasure map the PCs find…does not exist as a representation herein. I know I am nitpicking here, but it’s so obvious to me, particularly regarding kids. How do you engage them? Bingo, the open the box and you present the treasure map. There is no handout like that in here that depicts the island. You know, just a sketch will do…I made one. When the sketch approach is used, less experienced GMs could have certainly used the tricks to make old, creased, wrinkled parchment-style paper with coffee or tea. So yeah, when looked at under these circumstances, the module does have a flaw that can be nitpicked.

That being said, in spite of my nitpicking of one arguably optional component, this still is by far the most refined and well-thought out Ponyfinder supplement I’ve read so far and remains a pretty cool, engaging module with unobtrusive educational angles. My final verdict will hence clock in at 4.5 stars, rounded up to 5 for the purpose of this platform.

You can get this nice, wholesome and kid-friendly module here on OBS!

You can also get this neat module as part of the charity bundle for J Gray here on OBS!