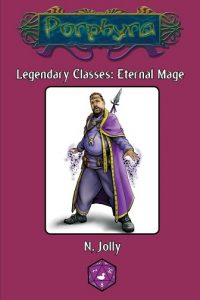 This installment of the Legendary Classes-series clocks in at 23 pages, 1 page front cover, 1 page editorial, 2 pages of SRD, leaving us with 19 pages of content, so let’s take a look!

So, what is this eternal mage guy? The class gets d6 HD, 2+Int mod skills per level, proficiency with simple weapons and suffer from arcane spell failure when wearing armor (and gain no proficiencies there). They also get 1/2 BAB-progression and good Will-saves – so, we have the classic full caster chassis, right?

Kind of. Spellcasting is radically different. Eternal mages draw their spells from the wizard spell list and are spontaneous casters – as such, Charisma is their governing attribute for spellcasting. An eternal mage begins play knowing 4 0-level spells and 2 1st level spells. Additional spells are exclusively gained via level progression and caps at 5 1st and 2nd level spells, 4 3rd, 4th and 5th level spells and 3 spells of the remaining levels. Unlike other spellcasters, high attributes do NOT provide bonus spells known. At 4th level and every even level thereafter, an eternal mage may replace a spell known with another of equal level, imposing a hard cap on retraining as well.

Additionally, an eternal mage has a harsh further limit imposed on spellcasting: They may only maintain one non-instantaneous or permanent spell at any given time, with new castings potentially immediately ending the previous effect. At 7th and 14th level, this limit is improved by +1 effect in place at a given time. At 1st level, the eternal mage also chooses 3 schools: Abjuration, Divination, Enchantment, Evocation, Illusion, Necromancy, Transmutation – they may only learn spells of the universal school or the three schools thus chosen. So, that would be the limits imposed on the basic framework of infinite casting. An additional school is unlocked at 5th level and every 5 levels thereafter.

This pool refreshes after resting and also acts as the resource for eternal secrets, the first of which is gained at 3rd level. Unless otherwise noted, an eternal secret’s activation is a free action and save DCs, where applicable, are equal to 10 + 1/2 class level + Cha-mod. As a minor formal nitpick: New eldritch secrets are gained every 3 levels thereafter, a sentence absent from the text, but evident from the table. Unless I have miscounted, a total of 40 such eternal secrets are provided. They range from gaining a familiar to being capable of spending overdrive points to increase the reality of a given spell…and if you want to go metamagic, you will need to do so via eternal secrets as well. Some overlap with an arcanist’s counterspelling prowess can also be found herein and the secrets also allow blasting specialists to ignore certain amounts of energy resistance. t should also be noted that the class features a pseudo warlock blast tree, with progressively more potent shapes, allowing for the expenditure of overdrive points to generate unytped arcane energy blasts. The secrets also contain means to reduce eldritch burnout gained by 1. There also is a means to cause foes nearby to gain eldritch burnout as a standard action, recovering 1/2 the target’s HD worth of eldritch burnout – smart, since that renders the ability scaling, kitten-proof and while I am not 100% comfortable with the 9th level move action variety, I can see why it’s there.

To sum it up – with eternal secrets, the spellcasting utilizes a cooldown period that can be modified/mitigated by a static, non-replenishing resource as a balance-mechanism. Starting at 6th level, the class gets an experimental spell -basically a spell wild card of any level except the highest level they can cast, which can be changed upon resting. Said spell increases burnout by 1, though- At 11th level the spell may belong to the highest level they can cast, but burnout increases by a further 1 in such a case. 17th level unlocks a second experimental spell.

As a capstone, the class may ignore the effects of eldritch burnout of up to 20 points, basically delimiting the caster level and DC decay of the class.

The pdf also features archetypes, the first of which would be the artillery expert, who would be the specialist for the untyped blasts I mentioned before. Instead of requiring the secret, they gain a modified version for free, with higher levels focusing the modifications of overdrive to instead enhance the respective blasting capacity. The second archetype is the dead eternal, who must choose necromancy and may select witch hexes as eternal secrets and with aracen artillery, the class can gain a specialized combo-secret that adds lesser artillery damage to the effects of hexes and the capstone providing not 1, but 2 grand hexes. The master specialist gains only 2 schools instead of 3, but gains +1 spell from the specialty schools at 2nd level and every 2 levels thereafter, with 6th level providing the arcane school secret instead of the eternal secret at that level. Imho, this one may be slightly too powerful, considering that the archetype still learns additional schools at higher levels.

As has become the tradition with Purple Duck Games, the book contains a TON of favored class options, not only for the core races and the planar ones, but also for the variable and diverse cast that populates Porphyra. It should also be noted that these generally don’t consist of the cookie-cutter variety…so yeah, kudos.

Editing and formatting are very good, though not perfect – I noticed some very minor hiccups here and tehre, though they do not influence the tight rules-language employed. Layout adheres to Purple Duck Games’ 1-column, printer-friendly standard and the pdf has no artwork apart from the cover. It should be noted that the pages are A5-sized (6” by 9”), making this the briefest Legendary Classes installment so far. The pdf comes fully bookmarked for your convenience.

Let me come clear from the get-go: The very concept of N. Jolly’s eternal mage is something I loathe as a person. NOT because I am against infinite casters; far from it; but because the very framework of using spells in an infinite capacity is not something the system was built for; spells vary greatly in power and from AoE-damage to hard terrain control and debuffs, the game-changer effects in battles are usually this powerful because they are restricted. Beyond that, a world in which any type of infinite casting is possible radically changes dynamics; whether it’s teleport-couriers, whole battalions of unerring magic missile firing mages or endless summoners who just replace their squashed minions. *I* don’t want to play in such a game world; I don’t want to GM it. It’s quite literally one of the things that made me settle on Pathfinder as opposed to other systems. It doesn’t fit with my personal aesthetics and it is the reason all the infinite or nigh-infinite casters I use are severely restricted regarding hard crowd control and the like.

THAT BEING SAID, I also really admire this framework. The talent of the designer is clearly evident in this class, with the restrictions and cool-down mechanic in game working surprisingly smoothly; while you *can* spam the same spell over and over if you make the build that way, it is regulated and discouraged, at least at low levels. If anything, I was surprised to see how well the class works at low levels, how smooth the cooldown-engine runs and how exceedingly important that reservoir becomes very quickly. I was also positively surprised to see the class not coming out as something broken in the classic definition of the word. While many of its drawbacks can somewhat be mitigated by sufficient spells in a can, it is nevertheless really impressive from a design-aesthetic point of view to see the class take a system designed as a limited resource and generating a complex framework that is basically infinite. I thought long and hard, and it is my fervent belief that this is probably as close to how you can make spells infinite as you can without breaking the game; this does not change the fact that the class is, system-immanently, built upon a wobbly foundation regarding spells and their power-curve. This does not change the fact that the introduction of these guys in a given world represents a paradigm-shift that modifies completely how the world works.

And this is where the pdf laves me torn like crazy; on the one hand, I, as a person, absolutely LOATHE the repercussions of this class; I’m into the nit and grit, believable worlds, internal logic, that sort of thing. On the other hand, I consider the engine of the class, even when I disagree in quite a few instances regarding the power of options (untyped damage, too much eldritch burnout reduction for my tastes, too many schools gained…) a thing of beauty; you see, if I *wanted* a less powerful eternal mage in my game, I could easily tinker with the engine and make a less powerful version of it. If the notion of casting infinite spells and the repercussions for the game world would intrigue me, I’d do just that. It’s honestly no rocket science and dead simple…which bespeaks the quality of the engine employed.

Now, as far as rating this, I picture this as one of the instance where I can’t possibly encompass all of my audience: On the one hand, conservative and simulationalist gamers will loathe the living hell out of this class. I do. On the other hand, I am absolutely positive that there is a significant amount of people who don’t care about the minor peculiarities of in-game logic or just want to go full-blown high fantasy..or simply wanted an exhaustion-style caster. These folks will probably love the eternal mage to bits and consider me a spoil-sport of epic proportions for harping on “unimportant” details when the class works surprisingly well.

Usually, I’d thus settle on the middle ground considering an oscillation of these proportions; however, considering that the very notion, if its consequences appall you as much as they do me, you already know to steer clear of this guy. Which leaves the “like the idea”-crowd…and for you ladies and gentlemen, this class will be fun indeed; while pretty strong in its default iteration, a halfway competent GM can potentially nerf it without any hassle by restricting schools, decreasing burnout mitigation options or simply adding a damage-type to the blasts. As a reviewer, I have to take that into account…as well as the fact that, while built on a foundation on sand called spells, the class remains surprisingly stable; as long as the GM takes close stock on how unlimited (with a cooldown) availability of a spell will change his game, I can see this class delivering fun moments in games that enjoy the concept. While it will never ever get even close to my home-game, the class thus deserves a final verdict of 4 stars.