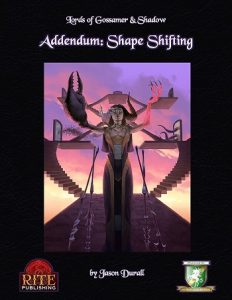 This installment of the Addendum-series for DICELESS roleplaying clocks in at 20 pages, 1 page front cover, 1 page editorial, 2 pages of advertisement, leaving us with 16 pages of content, so let’s take a look!

Shape shifting is contextualized as a power that is neither wholly of the Eidolon, nor of the Umbra; instead, it is an oscillating power of change in between and for this reason, mastery of either and shape shifting are a volatile combination, but more on that later.

Structure-wise, shape shifting is tiered in 4 levels: Lesser Shape Shifting (15 pts.), Shape Shifting (35 pts.), Advanced Shape Shifting (65 pts.) and Exalted Shape Shifting (85 pts.). Generally, shape shifting has limits – characters must assume shapes of at least animal intelligence – no rocks, grass or the like and the form needs to be substantial for all but exalted shape shifters – no ethereal, smoky, cloudy or the like forms for all but the masters of this ability. One crucial point pertaining shapeshifting would be the respective limits imposed by the Gossamer Reality: A dragon’s form in one world may easily be airborne and breathe fire, whereas in another, dragons would be unable to fly and perhaps emit acid. External anatomy like wings, generally can be reproduced via shapeshifting sans hassle, but internal structures like poison sacks, levitation organs or the like may well pose insurmountable tasks for the shape shifter. Similarly, the abilities potentially gained may well turn out to be rather taxing on Endurance of Psyche. Clothes and items worn when shifting are usually dropped or destroyed, though artifacts may be designed to accommodate shape shifter. Speaking of items – the pdf does cover the interaction of items with the respective shape shifting power.

Lesser changes can be done quickly in a few seconds, while musculoskeletal rearrangement and profound physiological or psychological changes may require a couple of minutes. One form is designated as the favored form – reversal to this form takes less than a minute.

Shape shifting, as mentioned, is exhausting – an endurance rank of average means that one change is exhausting, while paragons can shape change sans limits. A shape changer also usually keeps a distinguishing mark that sets the creature apart as the shape changer – basically a tell like a streak of white hair, a birthmark or the like. The more powerful a creature whose shape is assumed, the more risky the process becomes, for shape shifting always may affect the core identity of the character – turning into a Mythos-monstrosity, for example, may change the psychology so radically, that the new assumed identity tries to subvert the dominant personality of the shape shifter. Similarly, intense physical trauma may lock a character in a given shape and require tools like the True Name or similar tricks to allow the character to regain his form…and abilities. Finally, overuse may result, particularly when combined with the forces of Eidolon and Umbra in power rejection, which can have rather unpleasant consequences.

Now, what type of shape shifting do the respective tiers of the power convey? Well, more precise timeframes and ramifications for the respective concepts mentioned are depicted in the respective entries for the shape shifting powers and the pdf does mention the limits – lesser shape shifters already may assume hybrid forms, though generally, they are locked into one alternate form; real shape shifters may instead learn a plethora of forms, disguising and impromptu shape shifting, providing a significant upgrade in flexibility – think of that step up a akin to the comparison between a werewolf and a full-blown doppelgänger, including limited control over healing, instinctual shape shifting.

Advanced shape shifters may use their power to become something more than they were; a quasi-avatar of Eidolon or Umbra…or a living icon of themselves, becoming a kind of avatar of the idealized self. It should be noted that brief suggestions for the potential of use with blessings/curses and similar variant powers are provided and deemed appropriate at this power-level. Aura change, internal reconfiguration and size-change are cool, but beyond that, blood may be formed into tiny creatures to be commanded like spiders or birds and severed limbs may move autonomously from the shape shifter.

At the level of the exalted shape shifter, endurance and psyche retain their dominance, but the other attributes become more important as well – this level of mastery allows for the transformation in whole flocks of beings, regeneration, assuming a composition of an element or state of matter (like fluids or gasses) and better shape change as well as permanent transformation is very much possible here.

The pdf does mention the interaction of shape shifting with other powers like being a warden of the grand stair, wrighting or invocations and does note 4 canonical characters that are assumed to have shapeshifting when these rules are used.

Editing and formatting are very good – while I noticed an odd line-break and minor hiccups, nothing grievous in the glitch section. Layout adheres to Rite Publishing’s two-column full-color standard used for LoGaS-supplements and the pdf has several pieces of absolutely gorgeous artworks – the cover artwork, just fyi, is weaker than several pieces of interior artwork. The pdf comes fully bookmarked for your convenience.

Jason Durall’s addendum on shape shifting takes one of the big blank spots in Amber’s old array and fills it in with a concisely codified take on shape shifting that thankfully does not enter the territory of being restrictive. Instead, this pdf can be imagined as a kind of enabler, as it should be for the context of the high-imagination LoGaS framework. If there is anything to complain about, then that would be that the shape shifting herein does not necessarily explain the slightly related abilities Umbra practitioners could use and should be considered to supersede those fringe-cases. Still, this is just me grasping for straws to critique something. Overall, this expansion is precise, lacks any glaring glitches or holes I could find and represents a neat expansion for the LoGaS-multiverse. My final verdict will hence clock in at 5 stars.

You can get this cool supplement here on OBS!
Endzeitgeist out.