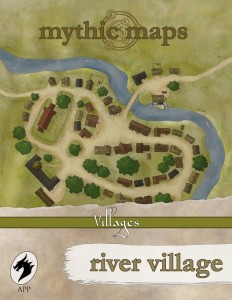 This Map-pack not only is pay-what you want, it comes in a zip-file that sports two folders: One containing high-res jpegs, one that sports pdfs.

Let’s start with the jpegs – these come with full-color and b/w-versions – both come in two versions: One sports labels that denote which buildings are which, whereas the others come without them for maximum immersion. (Nice if you’re like me and HATE handing out maps with numbers detailing the hotspots…

The pdfs clock in at 23 pages each – 1 page front cover, 1 page editorial, 1 page advertisement, leaving a total of 20 pages for the maps. The pdf first provides aforementioned maps that also are included as high-res jpegs – so if you require an overview of the village, these would be what you want. Thereafter, we get 4 blown-up versions of the map – each iteration is provided in a version, wherein the map spreads across a total of 4 pages, thus allowing you to print out a big map. If you’re like me a European, you will be very much in luck, for one pdf provides the maps in letterpack format, whereas the second delivers the maps optimized for the A4-format.

What about the town – well, we get essentially a village of the most idyllic type, with a single (mage’s) tower a bit off to the south and a small bridge crossing the meandering river. North of said small bridge, a mill and a few buildings loom, while the sparse trees show that this place probably lies in pretty civilized fields.

Tad Davis delivers a professionally-made, beautiful map-pack of a nice, picturesque village that could well be the starting point of a new campaign – as far as maps are concerned, this is a neat job and the drawing style is fine. While I caught myself wishing there was a version with a grid further blown up for your perusal with miniatures, at any price you’re willing to pay, this is indeed a great offering of a professional, nice map.

You can get this nice map for any price you want here on OBS!