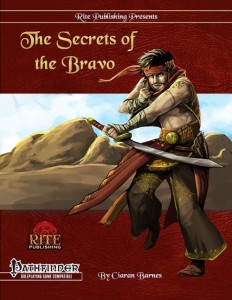 This pdf clocks in at 13 pages, 1 page front cover, 1 page editorial, 1 page advertisement and 1 page SRD, leaving us with 11 pages of content, so let’s take a look, shall we?

First of all, if you’re not familiar with one particular quality I love about Rite Publishing books – they are a good read, mainly due to even crunch books like this being written in character, with a member of that class, race, etc. explaining the role while adventuring, characteristics etc. Now if you’re a fan of “A Song of Ice and Fire”, you’ll immediately realize what to expect – whether braavosi water dancer or similar dashing swordsman, this is the class going for it. The bravo receives d10, full BAB-progression, good fort and ref-saves, 4+Int skills per level and proficiency with light armor + shields as well as simple and martial weapons. Some class features refer to bravo weapons, which are defined concisely as light or one-handed weapons not wielded in two hands. Only one weapon can be the designated bravo weapon at a given time. A Bravo begins play with Improved Feint and adds class level to Bluff checks when feinting, 1/2 class-level when using more than one weapon or shield. Alas, the ability fails to specify whether to round that up or down, though I assume down as a standard.

A bravo may also choose from one of 5 fighting techniques, receiving +1 at 5th level and every 5 levels thereafter. Fighting techniques have a passive and an active form. The passive form can be maintained for Intelligence modifier hours per day, used in hourly increments. While in passive form, the bravo receives an untyped +2 bonus to two skills associated with the fighting technique. The focused form, in contrast, may be maintained for 4+Intelligence modifier rounds, +2 per level attained. that should be *class* level Entering focused form is a swift action, dismissing it a free action. While in focused form, the bravo receives +2 to AC and to attacks with the bravo weapon. The focused form also nets the skill bonus and the +2 to, depending on the form, damage rolls, saving throws, combat maneuver bonus, critical confirmation rolls or “five times the bonus as in increase to base speed” – that’s supposed to be “an”, I guess. The bonus increases by +1 at 6th level and every 6 levels thereafter, hence the slightly uncommon wording choice. At 15th level, bravos may enter fighting techniques as an immediate action – which is less awesome than it sounds, seeing the interaction between immediate and swift actions. At 19th level, a bravo blends the fighting techniques and counts as if under the effects of them all.

A bravo also adds his level to damage rolls with bravo weapons when his target is denied his dex-bonus to AC or when executing AoOs. Additionally, Bravos may add cha-mod as a dodge bonus to AC, +1 at 4th level and every 4 levels thereafter. At 2nd level and every 4 levels thereafter, the bravo receives a bonus feat. Now the level 3 ability is pretty strong and kind of counter-intuitive -an enemy successfully fainted cannot make AoOs against the bravo and provokes an AoO from the bravo whenever performing an attack that does not include him. generally, a solid method of locking down a target on the bravo, drawing aggro, if you will.

At 4th level, a bravo receives élan equal to 1/2 level + cha-mod. These points may be spent to execute a feint as a swift action, move 1/4 movement as a free action before using a standard action to execute an attack “in the manner of a charge” – per se a cool idea, but does it count as a charge? Or as a regular attack? As an immediate action, the bravo can retroactively add half his bravo level as a luck bonus to ANY check (but not atk or dmg rolls) or add 1/2 his level as a dodge bonus to AC versus a single attack. Alternatively, he may execute, as a free action once per round, an AOO against a foe that has just missed him, not counting towards the daily limit. The pool should probably specify that it replenishes itself after 8 hours of rest, but that’s a nitpick.

As a standard action, bravos of 6th level may roll twice when attacking, taking the better result or even execute two feints at once, while 7th level bravos may execute debilitating strikes – these prompt a save and for 1 point of élan, depending on the fighting technique, the enemy receives a penalty that spans the gamut from “cannot perform attacks of opportunity” to “shaken”. When not in a form, the bravo may instead choose two points attribute damage.

At 8th level, bravos can use élan to NOT PROVOKE ANY AOOS for one round. Yeah, not gonna happen in my game. I can come up with so many ways of breaking this to smithereens, it’s not even funny. Compared to that, performing a move action as an immediate action and executing a combat maneuver as an AoO may seem less impressive: Especially since you can already perform combat maneuvers as AoOs. Yeah. This does NOTHING. Pretty weird – the 6th level double feint gets upgraded to triple (including triple attack roll option) as part of that ability, but at 11th level – not sure whether this is a formatting glitch, but I think it should have its own entry and just specify that it costs 1 élan…or does it? The 4-roll/feint 16th level ability does not cost élan, making me doubt this…

At 12th level, bravos treat their crit modifier of x2 weapons as x3 and threat ranges of 20 as 19-20…so what happens with bravos who actually have better threat ranges/modifiers? A class like this screams crit-fisher to me, why not properly codify that via the proper wording? Chances are, this one does nothing.

As a capstone, the bravo may freely spend 1 élan per round without decreasing his pool. The class receives feats for + 2 élan or +6 rounds focused fighting.

Then, we get to a kind of bonus content, with 5 additional fighting techniques – these adhere to a superior, more easy to read format that does not spread the benefits into tables and abilities, making me wonder why the whole pdf did not adhere to this standard. Alas, we have minor glitches here as well – the horse techniques’ fighting style’s passive form, for example, reduces ability damage by poison by 2 points, +1 at 6th level and every 6 levels thereafter – is that total attribute damage or per failed save? Also: What about poisons that inflict drain instead? Rare, I know, but still.

Editing and formatting are not on par with Rite Publishing’s usually high level of quality control – there are a lot of instances of e.g. no capital letters after colons, missing bolding in feats and even, probably, a formatting glitch for the triple-feint that may impede gameplay. Yeah, not cool. Layout adheres to RiP’s nice two-column full color standard and the pdf comes with nice, thematically fitting stock art. The pdf comes fully bookmarked for your convenience.

This is the first supplement by author Ciaran Barnes I’ve read and it does show promise – generally, the bravo as a take on duelist-type characters works pretty well; better, at least, than the by now terrible anachronism that is the Duelist PrC. That being said, the class also feels a bit simplistic in its basic tricks, with the advanced techniques (and their better formatting) showing an improved grasp on how rules can be presented. The issues of the bravo can be summed up in the way in which the fighting techniques are presented – by forcing them into brief tables, proper wording has no space and potential ambiguities arise. The option to eliminate ALL AoOs temporarily is insanely strong and should be codified in numerical bonuses. Bonus types are often untyped, but I figure that’s mostly by design. Now unlike many classes with wording issues, the bravo is a functional class and a solid take on a duelist, especially for relatively new players – the class is easy to grasp and should not over-exert any player’s capabilities to understand it. On the other hand, the designer’s relative inexperience does show – from the classic “class level”-glitch that makes dipping very powerful to some errors in the finer rules-interactions, the bravo feels a bit like the designer has slightly botched in the details.

Don’t get me wrong, this class can be fun, especially for players who consider Dreadfox Games’ superb Swordmaster (still the best duelist/dex-based combatant out there…) too complex, but between wording issues, editing glitches and minor balance-concerns, I can’t praise this pdf as highly as some of the rules components would warrant – I will most definitely convert some of the parrying/defense mechanisms. Still, this pdf ultimately is flawed to the point where I’d usually rate it down pretty harshly. Seeing that this is a freshman offering, its low price, nice prose and neat ideas, my final verdict will be 2.5 stars, rated up by a tight margin to 3 for the purpose of this platform.

You can get this base-class here on OBS and here on d20pfsrd.com’s shop.