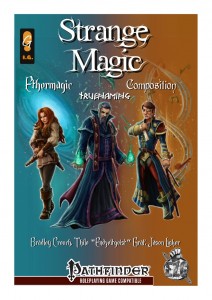 The following text will deviate a bit from my usual reviews. This is a massive 333 page book, 1 page front cover, 2 pages ToC, 1 page editorial/thank you, 1 page SRD, 1 page backer list, leaving this as a massive 327 page monster.

As you may realize upon looking at the cover, I am one of the contributing authors to this massive tome, so yes, in this case I may be considered biased by some of you out there.

It should be noted, though, that this massive book’s magic systems have ALL been released (and reviewed!) a LONG time before I had even an inkling I’d be working on this book, much less that I’d be contributing. Coincidentally, I reviewed all the base systems in their original iterations and considered them stellar – if that had not been the case, I quite frankly would not have associated my name with this book and its magic systems.

The excellence was there even before the respective systems were expanded to the n-th degree, with fine-tuning of mechanics, greatly increased amounts of options etc. All 3 systems have in common that they are not simple – they are intended for advanced players that enjoy tinkering with complex classes with moving parts. At the same time, the classes herein very much reward anyone willing to get into their meat with completely unique options.

If you are interested in the respective subsystems in detail, please take a look at my reviews for Ultimate Ethermagic, Ultimate Composition and Ultimate Truenaming.

In case you don’t want to read more than 30 pages of my rambling in the respective reviews, here’s the tl;dr-gist:

Composition Magic is what the bard should have been from the get-go: Take intros, outros, melodies and refrains and weave them together into your very own symphonies of destruction.

Finally, Truename magic needs no conceptual introduction, but unlike its horribly broken brethren from previous editions, the system presented herein works – and I’ve seen its barebones, exposed numbers, so yes, a true beauty.

All of these three systems have in common that they provide not only flavorful, but downright inspired, unusual alternatives to vancian casting that play in a completely different way. I had been playing with each of the systems for quite a while prior to the KS for Strange Magic and they had become a staple in my games even prior to my involvement with this massive book – not at my insistence, mind you, but at that of my players, who adore this book.

I also still am convinced that even without the content I provided for this massive tome, this would still rank as one of the best crunch-books I have ever read. No hyperbole.

This is what the 3.X Tome of Magic wanted to be, but failed miserably at – while Pact Magic was saved by Alexander Augunas and Dario Nardi, this book instead provides 3 new systems, with each one providing other, unique options beyond the scope of what regular spellcasting does, all while providing an utterly awesome fluff.

So while I am respecting the wishes of some of my readers and followers and will not rate this per se, I still feel very much obliged to devote this article to the book – the addition of lovingly- handcrafted, illustrated NPCs made with these rules just further extends the awesomeness of this book, with unique fighting styles, combos and inspiring backgroundstories. They can be considered the delightful icing on top of the awesome-cake.

Keeping silent about this glorious tome would be a disservice of my task of keeping you up to date regarding the best 3pps have to offer – and even without my humble additions, Bradley Crouch and Jason Linker have delivered true awesomeness herein and deserve to be acknowledged for the achievement that is this book.

I absolutely adore Strange Magic and consider it a contender for my Top Ten of 2015 and abundantly worthy of my seal of approval, which btw. all its constituent parts have received. Since by now, this book is a must-have addition to my game, much like Pact Magic and Psionics, it also receives the EZG Essential tag since my players do not want to ever miss it again.

I sincerely hope you’ll check it out, use it and review it – I’d love to hear how other people are using the book’s systems.

Finally, let me thank you for reading this. I am aware that posting this can be considered foolhardy, but it remains my sincere hope you’ll believe in my integrity -were I anything less than 100% in love with this book, I wouldn’t jeopardize my reputation by writing these lines. The matter of the fact is, though, that this *IS* so good, I consider it the antithesis of bland cookie-cutter design – perhaps even a book future editions will pull out to comment on how inspiring it was.

You can get this glorious tome here on OBS and here on d20pfsrd.com’s shop!

If you want to support Bradley Crouch making even more awesome systems, you can do so on his patreon here!
Endzeitgeist out.