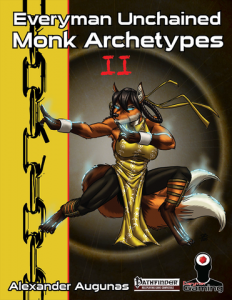 The second pdf by Everyman Gaming that covers Unchained variants of archetypes for the monk clocks in at 10 pages, 1 page front cover, 1 page editorial, 1 page SRD, leaving us with 7 pages of content, so let’s take a look, shall we?

The first monk herein would be the dwarven Contemplative, whose awaken divinity ability remains at first level and spurn the tradition remains available as well. the ability to use ki to power see invisible via Ki has been moved from 7th level to 8th, where it replaces the ki-power.

Next would be the Hamatulatsu Master, here called Golden Devil Master to avoid infringing on Paizo-IP, with the signature feat thankfully also being provided here. The unchained archetype gets infernal resilience at 5th level and moves ki pool to third in accordance with the base class. A minor modification -solid.

The Harrow Warden is represented as the Tarot Warden retaining Idiot Strike and Mute Hag Stance at their respective levels, with the two high level abilities being moved down one level to replace diamond body at 12th level and the 16th level ki-power, respectively, making this one feel slightly nerfed, though obviously Idiot Strike benefits from the unchained monk’s better BAB.

Now here’s a goody for fans of Everyman Gaming’s superb racial source-books: the Kitsune Kyuubi Visionary can be found herein in an unchained variant! Bonus feats and the Evoke Ki ability of these multi-tailed monks remain unchanged, Magical Fist, however, is changed – gone is the -2 penalty for flurrying with touch-requiring spell-like abilities due to the change of how flurry of blows works, instead providing a solid, nice new wording – though at the cost of the 8th-level ki-power. (Yes, this means one level later than for the base monk’s version.) The 12th level Mystic Recall sports an unfortunate glitch – it replaces abundant step, which the unchained monk no longer automatically gets – hence, it should probably replace the 12th level ki-power.

Fans of the no less inspired Samsaran Compendium will rejoice at seeing a conversion of the Samsaran Monk of a Million Lives. These guys retain the signature Zen Trance that replaces flurry of blows and ki pool is moved down to 3rd level according to the unchained monk’s paradigm. Past Life Skills is less costly for the unchained monk – instead of maneuver training, the unchained monk only loses +10 ft. movement rate for this ability. Many Lives retains its place and form. Wholeness of Spirit and Hasten the Cycle now hit at 8th and 12th level, replacing the respective ki-powers, while the high-level abilities remain unchanged.

Alexander Augunas’ Monk of the Seven Winds (oddly called Monks of the Seven Forms here – I can’t imagine that being an IP-case, or am I wrong?) are pretty straightforward: Lightning Finish is retained, while endurance at 3rd level now replaces the +10 ft. movement rate. Sirocco Fury is moved down one level to the 12th and there replaces the ki-power as well as the one gained at 16th to account for the upgrade the ability receives there – solid, nothing to complain about, though I’m still not a fan of this archetype.

The final archetype herein would be the Terra-cotta Monk, which retains Trap Intuition and substitutes that for evasion, with Trap Dodge being moved down to 9th level replacing improved evasion there. Stone Grip now is gained at 6th level and replaces the Stone Grip gained there and Sudden Adit replacing the 12th level ki-power. Petrifying Strike is moved down a level to 16th and 18th level nets Rainmaker, moving that one down by a level, replacing the respective ki-powers. Nice maintained power, in spite of the moving around of pieces.

Editing and formatting are very good, I did not notice an undue amount of issues. Layout adheres to Everyman Gaming’s two-column full-color standard and the pdf actually sports unique artworks crafted by Jacob Blackmon – obviously, kitsune. 😉 The pdf provides bookmarks, but oddly not for every archetype herein – strange.

Alexander Augunas’ second pdf covering Unchained monk archetypes follows in the footsteps of its predecessor – it utilizes the solid paradigm established and follows through with trademark ease, tackling, if writing this review was any inclination, a long and tedious work in a way that makes it seem effortless. The inclusion of Everyman Gaming’s racial archetypes definitely constituted an interesting and fun inclusion, a practice I would love to see continued – support for established concepts is always nice and helps keep products relevant.

This collection of archetypes definitely is solid and achieves what it sets out to do – it is very faithful to the archetypes, changing what must be changed and rendering them functional with Pathfinder Unchained. At the same time, I found myself truly craving more opportunities for Alexander’s unique designs to shine beyond the conversions provided herein. If you’re looking for a more diverse, less streamlined and cohesive, but also more playful take on archetype conversion, you may want to check out Purple Duck Games’ product – it ultimately depends on your personal taste and what you’re looking for. If you’re using one of the archetypes covered herein and Pathfinder Unchained, and especially if you’re using Alex’s racial archetypes, then you definitely need this pdf. My final verdict will clock in at 4 stars for a good, inexpensive pdf that took me ages to complete.

You can get these smooth conversions here on OBS and here on d20pfsrd.com’s shop!