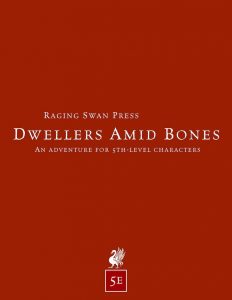 This collector’s edition of Dweller Amid Bones clocks in at 25 pages, 1 page front cover, 1 page advertisement, 1 page Gloamhold map, 1 page editorial, 1 page SRD, 1 page ToC/adventure background, 1 page back cover, leaving us with 18 pages of pure content, so let’s take a look, shall we?

The 5e-iteration of this sidetrek module is based on the Collector’s edition of the original adventure, and as such, includes the village of Arcmoor. The Arcmoor village backdrop is included in its entirety in the module.

Arcmoor as a settlement has its origins steeped in conflict – it is the place where the hero Therald Arcmoor fell, commemorating the final battle between the civilized races and the orcs of the severed ear – 300 ft. away from the feared tuskwood. With a majority population of halflings, the settlement obviously comes with a massive array of supplemental information: We receive information on the village’s demographics, whispers and rumors, nomenclature and clothing habits as well as local lore and marketplace-information. The marketplace information has been properly adjusted to represent the realities of 5e as a system, and the checks noted have similarly been adjusted.

That being said, as always, the map provided is glorious and represents the privacy the local populace cherishes with the village being relatively dispersed – one can even see where halflings and humans live. The village also provides 4 NPC write-ups one can encounter here, and these are depicted in Raging Swan Press’ usual, fluff-centric presentation, sporting no stats, and instead focusing on mannerisms, etc. Beyond that, the village, being close to the ancient battlefield, has drawn a less than nice person living in the village, one with a strange agenda.

The 5e-iteration included here features the new and expanded content created for the stand-alone supplement version of Arcmoor: This content elaborates on the life in Arcmoor, provides more detailed notes on local trade and industry, and we now get a full 20-entry table of dressing and events that allows us to bring the village closer to life. Similarly, the aforementioned Tuskwood is not only fully mapped, it does also include a variety of different pieces of information regarding the surrounding locality.

As for the keyed locations of the village itself, the presentation has improved over the original PFRPG-presentation: The respective write-ups now feature easy to paraphrase read-aloud texts, suggested random encounters for the nearby battlefield, and lists of strange and unique goods that may be scavenged or unearthed from the chaotic general goods store.

Much to my chagrin, the transitory wilderness section that was included in the original PFRPG-version, including random encounters and a fully-statted sprite swarm, has been cut.

All right, from the village and the hooks, one can easily send the PCs towards the proper module – which takes place in the cairn devoted to the fallen orcs.

All right, still here? Great! As hinted before, Dwellers Amid Bones has the PCs explore an orcish burial cairn to put an end to the various raids conducted by a mated pair of green draconic beings – only forest drakes, thankfully, but deadly nevertheless! The cairn and its details are up to the standard set in Raging Swan modules – general features and details to add to even unkeyed areas make exploring the cairn interesting and atmospheric. There generally is a lot of stuff to interact with, including proper 5e-DCs etc.

Now from the very beginning, we get a cool twist: Gork Shattershield, undead orcish wight, manifests behind the PCs to demand they purge the drakes (which have time and time again destroyed the stubborn undead orc, only to see him rejuvenate) – thus the adventure begins with an uncommon social interaction before turning ugly – fast! Quick scaling notes for all combat encounters are presented. The Orc ghost’s Wisdom saving throw and passive Perception are incorrect.

The drakes lurk in relative proximity and once roused, both attack with their noxious clouds, fight, and when damaged too hard. Now, in PFRPG, the module’s appeal was highly contingent on how technical it was regarding its use of terrain and clever tactics. 5e’s less detailed and tactics-focused chassis does lose a bit of this appeal, though it manages to do some cool things here with lair actions: The drakes get quite a few of them, which allows the module to capture some of that appeal. Kudos!

It should also be noted that DMs get a detailed array of hooks for further adventures.

John N. Whyte’s 5e-vconversion of Creighton Broadhurst’s and Fabian Fehrs’ module does a good job, considering that it system-immanently loses the aspect that made the module stand out most, namely the original’s tight focus on using environment in PFRPG to make lairs challenging. The 5e-iteration manages to capture a bit of that spirit, but it also features some minor hiccups in the stats of one of two original statblocks. Is this bad? No. But it also loses some aspects from the Collector’s Edition that it really didn’t need to cut.

It’s a nice little sidetrek, and it does a solid job at making the module work. As a whole, I consider this to be a solid conversion, though if you have the luxury of choice, I’d recommend the original over this one. My final verdict will be 3.5 stars, rounded up due to in dubio pro reo.