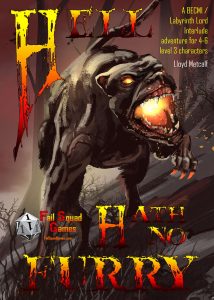 Just before you ask: No, this has nothing to do with furries or fursecution.

Rules-wise, this employs BECMI/labyrinth Lord rules and is intended for four to six characters of 3rd level. Conversion to other old-school rule-sets is pretty simple. While this nominally has ties to the Lands of Lunacy supplement, the reference may be removed easily, should you choose to do so. 60’ (20’) is the default MV, AC is descending and we get HD-ratings and saves based on certain classes – “F5” e.g. pertaining to saving like a 5th level fighter. Most folks should encounter no issues using this as written

Structurally, the adventure is an interlude that consists of a hexcrawl overland section as well as a brief 9-room mini-dungeon, both of which come with decent full-color artworks, but no player-friendly version. The mini-dungeon actually has two different paths, which is a nice touch. Some, but not all rooms/encounters have read-aloud text. Formatting of statblocks is better than usual, with components bolded. Spells are not italicized.

This is far as I can go without diving into SPOILERS. Only referees should continue reading.

All right, only referees around? So, essentially, a pack of hellhounds has escaped into the material plane, which resulted in a forest fire. The PCs are hounded (haha!) by the deadly fire-breathing canines, and may also encounter fire hornets. Ultimately, they will find a complex with low ceilings and pretty high temperatures. (Nice: The heat has mechanical repercussions!)  The dungeon is pretty straight-forward and includes imp-like beings called dirieli (which are somewhat akin to imps) and since most adversaries are intelligent, there actually are chances for roleplaying.

The best angle of the module, at least for me, would be that Gris, the alpha of the hellhounds, has actually escaped an abusive fire giant master from the lands of lunacy. So, do sadistic hellhounds that cause forest fires have a right to determine their fate? Will the PCs attempt to cut a deal with the giant? The finale btw. also has an option to destroy the portal, but the aftermath may well see the PCs stranded in the lands of lunacy…

Editing and formatting are good on a formal and rules-language level – not perfect, but vastly better than the previous sidetreks by Fail Squad Games I’ve covered. Layout adheres to a two-column full-color artwork, and the pdf has no artworks apart from the nice cover. The full-color cartography is solid, though the lack of player-friendly versions is a bit of a bummer.

Lloyd Metcalf’s sidetrek doesn’t reinvent the wheel, but it’s a decent enough little interlude. The dilemma at the finale is potentially interesting, particularly if your players are of the “not-murderhobo-everything”- profession. All in all, I consider this to be a per se solid sidetrek; not anything that will blow your mind, but solid and inexpensive. My final verdict will thus clock in at 3.5 stars, rounded down.

You can get this little sidetrek here on OBS!

You can get the cool lands of Lunacy booklet here on OBS!

If you can, I’d appreciate a direct donation or joining my patreon. Thank you.