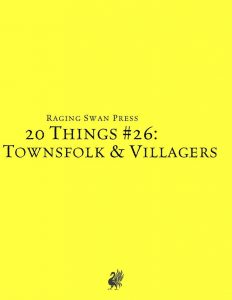 This installment of the #20 Things-series clocks in at 11 pages, 1 page front cover, 2 pages of advertisement, 1 page editorial/ToC, 1 page SRD, 1 page back cover, leaving us with 5 pages of content, so let’s take a look!

Okay, this one is slightly more straightforward than most installments of the series, focusing exclusively, as the title promises, on folks you can meet in smaller settlements – we get one page devoted to one type of person, which makes sense from an organization paradigm and makes sure you find what you’re looking for quickly and without much hassle. As always in this series, suggested alignments are noted in brackets alongside general age categories, races and classes, if any. The latter employ old-school nomenclature for classes, speaking of thieves and magic-users.

The first of these groups would be the destitute – beggars and vagabonds: Here, we can find the desperate, crippled former soldiers, servants of wealthy families out for revenge after having been thrown out and more. The motivations of these folk make sense and are sufficiently versatile. Oddly, the bookmark to the second cadre of folks does not jump to the correct page: Instead of arriving on the soldiers and guards page, we end up on the beggar/vagabond-page. The page of the guards and soldiers paints a diverse picture, including those that have fallen on hard times, a towering femal blacksmith-turned-fighter and even an incognito spy.

Among the merchants and tradespersons, we have dog-persons, a trader who wants to please folks and as a result, is easy to haggle down and a striking psychopath sans morals. A truly charitable, good person is also part of the roster here. 10 peasants and serfs include those that always find themselves in the midst of drama, old folks with a penchant for friendly rambling and a good-hearted lady that sometimes goes out to collect medicinal herbs – in spite of that not being exactly safe… This one also links to the previous page.

The second aspect of this pdf would be a general array of 20 encounter hooks that allows you to establish NPCs having bad days, being fascinated by the PCs, recovering from an injury, etc. – I really liked this section, though I did find myself wishing it was a bit longer.

Editing and formatting are top-notch, I noticed no glitches. Layout adheres to an elegant, minimalist 2-column b/w-standard, and the pdf sports a couple of really nice b/w-artworks. The pdf comes fully bookmarked for your convenience, though two bookmarks are not perfectly working, and the pdf comes in two different versions, one of which is optimized for screen-use, and one is optimized for printing it out.

Creighton Broadhurst’s NPC-dressing file provides some really neat window-dressing for the often overlooked NPCs that are populating our fantasy towns, and as such, this is a helpful, fun little pdf. At the same time, I couldn’t help but feel like e.g. a designated pdf just for traders, one just for serfs etc. would have added to the value here. We get a good jack-of-all-trades file with this pdf, but the dressing here could have gone a bit further into the depths. Compared to the excellence that this series has established, this one struck me as slightly less impressive, and as such, my final verdict will be 4.5 stars, rounded down – very much worth getting, but not as mind-blowing as his best dressing-files.