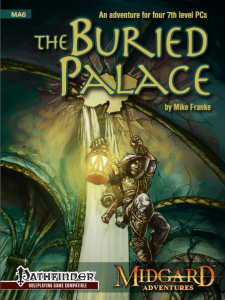 This module is 24 pages long, 1 page front cover, 2 pages editorial, 1 page SRD, leaving us with 20 pages of content, so let’s take a look, shall we?

This being an adventure-review, the following contains SPOILERS. Potential players should jump to the conclusion. All right, still here?

Imperial Marshall Karridoc Castellan of Valera, one of the most powerful men in the 7 cities, requests the presence of the PCs – for an uncommon task: Below a bathing house, recent tremors have unearthed an old ruin of the Valeran empire – one the PCs are to scour for works of art and similar valuable memorabilia of interest to Valera.

The module doesn’t waste much time before dropping the PCs into the fray – and for a good reason. While usually buried palaces would elicit yawns from me, this one is expertly crafted: Unstable and in danger of collapsing, the PCs will have to contend with a constant dread of claustrophobia as the water from the bathing house trickles down and modify their fighting tactics accordingly – blasting this swarm of army ants with a fireball doesn’t seem to be that smart when collapse is a real danger…

Via both terrain-features and crunch, a sense of desolation and decay is evoked alongside a very present fear of being squashed as PCs have to contend with creatures that feel at home in the ruins – whether the aforementioned swarm or violet fungi or one glass golem left from the days of old, the inhabitants of the palace will challenge even experienced PCs while feeling like they truly belong to the complex, eliciting a sense of organic wholeness seldom seen in modules, let alone ones with “only” 20 pages.

Worse for the PCs, the Boss-encounter is a delusional worm-that-walks that is in possession of a crucial piece of regalia the PCs will want to acquire. Here we also have a cool idea – while the foe is more than a sufficient challenge, his delusions may just prove to be the edge the PCs need, for they have a precarious situation on their hands upon return:

From frescoes and information gleaned in the ruins, the PCs can unearth a piece of information that may not only turn their former employer against them, but also make them some of the most wanted men and women (and humanoids, if present) that roam the 7 cities… What that is, you ask? I won’t spoil that one! Suffice to say, clever reasoning and a touch of diplomacy and an aptitude for lying can help in the climax of the adventure, which should feel refreshingly different from the standard-fare one expects.

Editing and formatting are top-notch, I didn’t notice any glitches. Layout adheres to an elegant 2-column standard in b/w with the read-aloud text being framed by orangeish/brownish colors. The artwork is nice and Sean MacDonald’s cartography in b/w is awesome and detailed – though I wish player-friendly versions of the dungeon’s maps had been provided. Their absence is the one thing that galled me about this module. The pdf comes fully bookmarked for your convenience.

Steeped in Midgard-lore, yet easily transported into any given setting, The Buried Palace delivers a concise dungeon that makes sense, oozing looming dread and a sense of antiquity while not forgetting terrain, interesting creatures and a twist ending that your PCs won’t see coming – at first.  The dawning suspicions should enhance the tension that suffuses the pages of this module and makes it, from start to finish, a challenging, but not unfair and exciting module – one I can’t believe author Mike Franke has crammed into a paltry twenty pages. I’ve read many dungeons that fail to reach this level of immersion with twice the page-count.

If by now you haven’t guessed: I really, really like this module and the only reason I’m not slamming my seal of approval on it is the lack of player-friendly maps. In fact, I’d usually go for 4.5 stars due to that and round down, but honestly, that would be a disservice to this module and its more than fair price. Hence, my final verdict will clock in at 5 stars.

You can get this awesome, affordable crawl here on OBS!