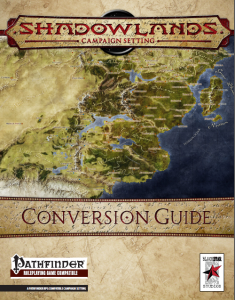 This free guide is an introduction to the Shadowlands setting and clocks in at 30 pages, 1 page front cover, 2 pages editorial, 1 page advertisement, 1 page ToC, 1 blank page and 1 page back cover, leaving us with 23 pages of content, so let’s take a look!

The guide is divided into two sections, with the first being appropriate for players as well as DMs and the second intended for DMs only – so let’s take a look, what we are offered. And…BAM: two-page spread of Jonathan Robert’s cartography is the first thing you’ll see – damn impressive every time I see one of his gorgeous works.

The world of Sæmyyr is a huge place- literally. Much larger than earth, it breathes a sense of epicness – take the elven empire: Population: 120.000.000. Yes. This is quite literally larger than life. Being a conversion guide, this includes, among others, e.g. the story of the ascension of Malak Ta’us to the god to the god Magus Septimus Serpentes is provided – which lies about 10.000 years in the past – in a cataclysm that devastated a huge swath of land and combined divine, arcane and psionic energy, he transcended mortal bounds.

Psionics? Yes, for the setting is designed with full support of Dreamscarred Press’ Psionics Unleashed – which I applaud. Speaking of things I applaud: Black Star Games does one gutsy thing and makes racism between races and ethnicities part of the canon of the world of Sæmyyr – and the prejudices according to castes. Being a central theme in my own campaigns, I do enjoy this sense of maturity – so again, kudos! What’s not so great about this guide is how e.g. the ethnicities are handled: I really like that the respective ethnicities get their own racial powers/options – but unfortunately, the conversion guideline itself is rather ambiguous: The pdf specifies ” The Èuraith are treated as normal elves in all respects (and follow all of the mechanics as provided in Chapter 2 of Pathfinder Core Rulebook) except for the following modifications;”- and then the attribute modifiers begin. Are these in addition to regular elven attribute modifications or do they replace them? The pdf fails to specify and unfortunately, that glitch is repeated in every single entry. Worse, the attribute modifiers do not follow Pathfinder rules conventions, coming in odd segments with e.g. -1 to Con, +1 to Int – when PFRPG usually only dishes out these modifications in even increments.

What’s also rather cool is that non-humans get special racial powers, 10 of which are provided. These work as supernatural abilities. And I do like these. I also like how all Paizo-classes and their roles in the setting are covered – and that e.g. alchemists are far-spread, arcane magic is firmly under the thumb of the Bortherhood of Serpentes and psionicists are viewed as dangerous. Also nice is that, while there are lingua franca, a heavier emphasis is put on different languages – no annoying common here. (and yes, the first thing I tend to eliminate in my settings linguistics-wise is common . I rather establish several trade languages, akin to how English and Chinese are working right now) We also are introduced to 11 balanced traits and get names for the different currencies according to lands – neat!

Arcane magic, as mentioned, is heavily policed by the global brotherhood and is less stable than in other worlds – and the eye-colors of practitioners change along the spectrum, making it possible to roughly identify the level of power practitioners have. Oh, and compulsions are illegal.

In the DM-section, then, some very crucial pieces of information are shared – which I will not repeat here, to avoid spoilers – but interesting would e.g. be that only a tiny fraction of the people actually are heroes and able to wield supernatural powers like spellcasting, setting the heroes apart from the get-go. We also get a list of recommended books to read as well as a one-page appendix of alchemical items (including information on whether they’re legal and what they cost, but not their craft-DCs) before ending the guide with a list of books to be released for the Shadowlands.

Editing and formatting are good, though not perfect: From minor punctuation glitches to multiple instances of not italicized spell names, I encountered quite a few non-crucial blunders. Layout adheres to a drop-dead gorgeous two-column full color standard and the pdf comes with glorious maps and full color artworks ranking among the highest echelons. The pdf comes fully bookmarked.

So…as a free conversion guide, this makes for a nice teaser for the intriguing world of Sæmyyr – but not a perfect one. The rules ambiguities stick out to me, as does the lack of favored class options. It is also mentioned in the player section that arcane magic and psionics may be unstable – but in the DM-section, no concrete examples/rules are given – and at least to me, that’s a very crucial factor in converting characters from a regular PFRPG-setting to Sæmyyr. While I love the themes and maturity and level to detail exhibited here and have to acknowledge that it works as a free teaser, these gripes still mean that I can’t rate this 5 stars. Instead, I’ll settle on a final verdict of 4 stars – well worth checking out – it’s free, after all!

You can get this glimpse at a new world here on OBS!