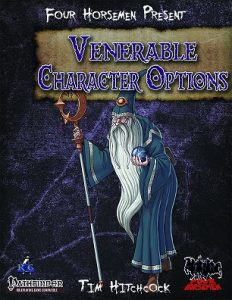 This installment of the Four Horsemen Present series clocks in at 16 pages, 1 page front cover, 1 page editorial, 1/2 page advertisement, 1 page SRD, leaving us with 12.5 pages of content, so let’s take a look!

We begin this pdf with a grand contemplation of the venerable age and its defining traits – the senium, the time, when supposedly, the body starts to break down and death is approaching….only this time around, we talk about adventuring! While we probably all have been there, had a character retire from adventuring and then proceeded to play a son, niece or pupil of the old character…why? Why not actually pull out the old guns, with all their knowledge and experience? Indeed, this pdf deals with exactly this subject matter…and it does so by talking about different conceptions of old age, of what it *means* beyond the strict number of years: In a given culture, it could ascribe supernatural prowess to you; aging could be seen as a divine curse and we have to take into account that our aging is infinitely more graceful than that medieval societies were afforded: Without access to modern hygiene and means to offer proper prosthetics or medicine, old age was, at least to our own eyes, probably more horrific – so, as one of the suggestions goes, what if it was considered a disease by the young? This disturbing idea, once again, provides a palpably nasty option for story-telling…and what else can one ask for from such a content? Awesome!

In a fantasy-context, we obviously also have to take a look at the venerable non-human races and thus, the core-roster of races and their respective takes on old age are covered herein as well. After that, we proceed to reasons for venerable characters adventuring – from the apocalyptic threat to global (or local) sterility and the quest for youth eternal, the ideas here are evocative in presentation and make sense. As has become the tradition with these age-based books, the pdf also contains age-based traits, and, once again, bonuses used do not necessarily follow the usual trait-bonus, though some do. While this is cosmetic and I do enjoy e.g. the “sleep only 6 hours trait” (which I seem to have IRL in spite of not being venerable), I really wish they featured the respective proper trait sub-category.

A total of 11 feats for venerable characters are provided and let you e.g. use Int or Wis for attack rolls or feign frailty, allowing you to once per combat take 20 on Bluff. (Cue insert my rant against per-combat abilities.) Basically, the feats here allow you, for the cost of the feat-tax, to eliminate the negative repercussions of venerable age and use mental stats instead, turning them into bonuses…which, as a whole, may not suit every campaign, but makes sense from a mechanical point of view. There also is a “create attack plan with prep 1 minute” tactician-y feat. All in all, a solid “make classes that don’t work anymore at old old+ work”- array of tools; not more, but also not less.

The pdf closes with basically a PrC-like class-template that only requires two skills with 5+ ranks and venerable age to qualify. The ancient sensei covers 10 levels and retains HD, save, etc.-progression of the favored class of the base character and the framework similarly assume a continued progression of spellcasting, already gained class abilities dependant on levels, etc. The ancient sensei gains 1/2 his ancient sensei level + Wis-mod insight points (min 1). These points can be used as a swift action and unless otherwise noted, their effects last for one round. Whether adding +1d6 per two ancient sensei levels to a favored class feature, gaining a rogue talent, rage power, etc. for 1 round; double the duration of a class feature with duration, add 1/2 ancient sensei level to atk, damage or skill-rolls granted by a favored class feature or +1/daily use. While I *get* what these are supposed to do…the wording here isn’t that precise. If e.g. a class feature deals a fixed amount of damage like “1”, could he add +1/2 level? The issue is system-immanent due to the universal nature of the PrC, but I so wished it would have been specific regarding what type of abilities can be enhanced how. Sure, you can deduce it…but still.

2nd level nets Leadership with scaling bonuses at higher levels and at 1st level and every 2 levels thereafter, the ancient sensei gains one insight ability, to be chosen from 21, unless I have miscounted: From solo tactics to immunity to poisons, instant skill mastery and similar tricks, the abilities themselves, which include spending insight to move as a swift action, feel generally solid (though I noticed “draw attacks of opportunity” which usually is “provoke” as a minor, but cosmetic deviation from the standard) and as a whole, look like they belong in the same power category, with slight fluctuations. 3rd level becomes brutal, as the sensei can spend insight to lend abilities thus gained to allies…which is a bit odd: So, if the sensei spends insight to lend such an ability and the ally gets it, got that. However, the ability reads that the ally keeps it for 1 round per character level of the sensei. If the ability requires activation like aforementioned swift action-move, can the target use the ability freely during this duration? If so, this is horribly OP. If not…well, then this needs some clarification. At 10th level, the ancient sensei may restore his insight by contemplating for 10 minutes per insight point.

Editing and formatting are very good, I noticed no significant glitches. The blending of full-color and b/w-artworks, none of which I had seen before, is neat as well. The pdf comes cully bookmarked for your convenience.

Tim Hitchcok’s take on venerable characters is generally fun and inspired – the hooks and things to consider are great and while I wasn’t blown away by all traits, I liked enough of them. The feats fall squarely in the “offset penalty”-department, which is fine, considering the subject matter. The feats that didn’t…well, seen those concepts done before…not too impressed there.

The ancient sensei, to me, is the pièce de résistance here and…I honestly shouldn’t like it. It is a pretty powerful option and its very general rules, by virtue of its design, are somewhat less precise than I like my crunch to be – if you design for the totality of classes, some sand is bound to fall into the gears of the rules-mechanisms. The crunch has some minor flaws here that could have been addressed…but in spite of its complexity, ultimately it works – it may need some work by the GM to account for specifics, but the whole of the class, surprisingly, is something I enjoyed, with the focus on utility, leadership and defensive options meaning that most classes won’t have an undue advantage when taking this quasi-PrC.

How to rate this, then? Well, while this is not perfect, it did have several components that captured my imagination, several nice ideas. However, from a crunch-perspective, I was somewhat less enthused after digesting the material. In the end, I consider this an interesting, if not perfect array of options, which is interesting for the interaction of fluff and crunch here. If you’re interested in the whole deal, this is a 4 star-book for you. If you’re in it for the crunch alone, you may want to subtract a star, though – in that regard, I actually prefer the mature character options.

You can get this neat pdf here on OBS and show those young’uns how it’s done!
Endzeitgeist out.