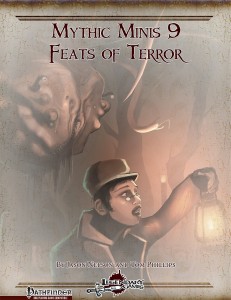 This time, we’re all about feats that inspire true dread, so let’s take a look!

-Dragonfear: Says it all – better, mythic rank-powered frightful presence for dragons. Make those knights run! Pity there’s no “Let non-mythic-guys-die-by-dragonfright”-caveat as seen in some books…

-Gory Finish (Mythic): Better, mythic version of the feat, allows you use it easier and use mythic power to spontaneously use it in conjunction with weapons that you have weapon focus in. Makes more sense as an option than the base feat. Neat!

-Intimidating Bane (Mythic): Another mythic version of a base feat, making the rather bland base feat actually work and be less of a waste – better intimidating effects and free weapo focus with bane weapons when using the base feat. Neat!

-Menacing Blow: Available in normal and mythic, this allows you to intimidate with critcal hits as a swift action (or in the mythic version, with tier bonus as a free action). Nice, though the mythic version can result in A LOT of annoying rolls with high threat-range builds.

-Nightmare Fuel (Mythic): See, that’s what I expected – impose penalties on those hit by your demoralize-attempts, frightful presence and similar panic/madness-inducing effects and add nightmare to the fray. The special caveat for qlippoths is just the icing on the cake – two thumbs up!

-Terrifying Critical: A non-mythic feat with an mythic option, this forces foes hit by a crit to save versus 10+BAB or become shaken for 1d4 rounds, 1 on a made save. The rounds actually stack in both versions, with the mythic version also increasing fear-severity and mythic power as an optional fuel to increase the save DC. I’m not a huge fan of stacking condition-durations, but in this case, I do think it works, with the BAB +11 requirement ensuring it remains balanced. Neat and kudos!

Jason Nelson and Tom Phillips deliver a nice array of fear-themed feats for the mythic rules that do quite a bit right – either by making otherwise weak options better or by creating cool new ones. That being said, the pdf’s focus is a bit weird, with essentially (great) monster feats mixed with ones more in line for players. There’s not much wrong here (apart from the potentially annoying mythic version of menacing blow – but mechanically, that one is still sound…) and a couple of the feats actually rock hard. On the other hand, while there’s nothing wrong per se here, the pdf didn’t blow me away. I’m also a bit surprised to find no options to use mythic power to temporarily eliminate immunity to fear, but that may just be me. This remains a solid, nice addition to the product line, if not a perfect one. My final verdict clocks in at 4 stars.

You can get these feats here on OBS and here on d20pfsrd.com’s shop.