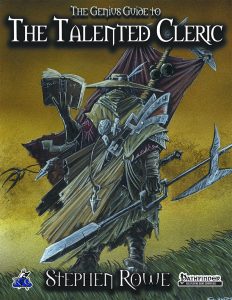 The so far largest of the Talented class-pdfs released by Rogue Genius Games clocks in at a colossal 91 (!!!) pages, 1 page front cover, 1 page ToC, 1/2 a page editorial, 2 pages of SRD, leaving us with 86 1/2 pages of content, so let’s take a look at this beast!

Okay, at this point I assume that you are familiar with the set-up of talented classes and will not explain the concept for the oomphteenth time: In short: Breakdown of class features and archetype abilities in two categories, edges and talents, allowing for increased flexibility. If you need a more detailed breakdown, please consult all of my reviews for the other talented classes.

Chassis-wise, the talented cleric gains d8 HD, 2+Int skills per level, proficiency with simple weapons and light armor, 3/4 BAB-progression, good Will-saves and aura corresponding to deity or alignment and bonus languages. The class begins with 4 edges, 2 talents and gains 2 edges and 3 talents at 2nd level. At 3rd level and every odd level thereafter, the class gains an edge. The class usually gets a talent whenever it does not gain an edge, with the exclusion of the first 2 levels and 5th and 7th level, where both edges and talents are gained. 20th level provides the Agent of Divinity capstone.

Now, there is a glitch here: The table actually is incorrect: The talented cleric should gain 6 edges and 3 talents at 1st level, as per the text – this is a pretty big hiccup and not something I’d consider negligible. Anyways, this massive book does have something included you may be surprised to see: You see, this actually should be the “Talented Cleric and Warpriest” – it does contain blessings and all the warpriest tricks as well, which probably goes a long way to explain its huge size. We’ll get back to this component later.

No as for edges, as established in the series, cleric spell casting (prepared, via Wis) progresses via subsequently taken edges, with 3rd level and every 2 levels thereafter unlocking new spell levels. Similarly, domains are edges and act as a prerequisite for a lot of the talents you can find. If you take a blessing and have a domain, it must correspond to it. Blessings can be used 3 + 1/2 class level number of times per day, and the edge can be taken an additional time to unlock 2 new blessings. I *assume* these do not need to correspond to domains, since the ability does not specifically say so, but having that in print would help. Like domains, blessings act as prerequisites for certain talents. Improved familiar, fervor, flurry of blows, ki pool (available starting 7th level), mounts and orisons, proficiencies and spontaneous casting all fall in the edge category. Similarly, the somewhat notorious vows can be found here, including the vow of poverty, which does not feature “vow” in the ability’s name – while obvious from context on how it should work, it still is an oversight. Similarly, you’ll notice a relic “warpriest” here and there.

Beyond these components, however, the edge chapter does allow you to play nihilist clerics (unlocking a lot, prereq-wise) (YES!!!), godless ones (similar) or demigods or pantheon worshippers. Pantheon worshippers, with their flexibility of domains and demigods, who may expend spells as immediate actions to force penalized rerolls, may be the two options here that I do consider a bit problematic. That being said, as a whole, the edges do a solid job in enabling various concepts and the pdf even features psychic clerics, which is great if you’re like me and plan an OA-centric game.

Now talent-wise, things become interesting: Asterisk’d talents are blessing talents and usually require the corresponding blessing to work, though some can be qualified for via domains. Channel Energy is found among the talents, surprisingly – but here’s the thing: The progression actually, analogue to spellcasting, requires additional talents, with a cap of 1/2 class level + 1d6 as the maximum to prevent min-maxing abuse at lower levels. Channel energy is relevant, since alternate channeling talents are codified in an appendix, working as potential substitutions for the talent. Beyond that, variant channeling is detailed in excessive detail. The pdf also features a spell-list, which is pretty important, since a lot of the edges and talents, domains, etc. expand spell availability – and for the most part, that component does make sense.

One should also not fail to mention that e.g. divine commander and thus, mass combat options, can be found among the codified talents. Blessed Fortitude cannot be cheesed into, requiring divine armor and minimum 3rd level. Now, there is a structurally problematic component with the base cleric class that becomes apparent when breaking down the class as a talented class – it is very front-heavy. Much like the better installments in the series, flexibility, ultimately, does come with a bit of a price here, namely a slight delay, though one that ultimately allows for a more rewarding playing experience.

Editing and formatting are good, though not perfect – I noticed a couple of hiccups. Layout adheres to the 2-column full-color standard employed by RGG for these books; the pdf has relatively broad borders, but also a ton of text, making this an incredibly dense pdf to process. The artwork, while I’ve seen most of it, feels more unified than in the bard book (Plus: I love the black-lipstick-wearing battle-nun) and the pdf comes fully bookmarked for your convenience, though individual edges/talents do not have bookmarks, so you’ll do a bit of scrolling.

Stephen Rowe is a beast – I can’t really picture doing all of this work myself without being utterly burned out on the concept; design like this is capital letters WORK and this pdf certainly does a neat job in codifying the cleric and warpriest within the talented framework. That being said, personally, I am not a fan of the warpriest being integrated herein: The combination options of warpriest and cleric within this book, while certainly helpful for some groups, does actually limit the appeal of the pdf, at least for me. I’m not the biggest fan of the ACG-classes and the combination options of warpriest and cleric options, as a whole, allow you to transcend the power of either class – which may just be what optimizers asked for, but when compared to master Rowe’s talented witch, I can actually picture campaigns in which I’d not use it. In short: My rather gritty main campaign will not get to use this book. That being said, unlike the witch, going completely spell-less is less viable due to the chassis, though the combination of both classes would have made that a distinct possibility if the blessing/domain-prerequisite-aspect had come with alternate means of qualification.

Don’t get me wrong – this is not a bad book, not at all. But is does groan a bit under its own weight. I do believe that separately balancing cleric and warpriest would have probably resulted in more precise results. I am complaining at a high level here, but this one still ends up being one of my least favorite installments of the series, in spite of its epic scope and cool (often novel!) ideas. For me, the min-maxy aspect is slightly too pronounced in this one. My final verdict will hence clock in at 3.5 stars, rounded up due to in dubio pro reo.