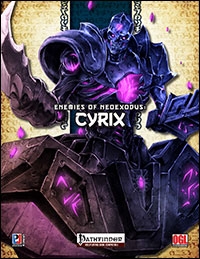 This supplement is 18 pages long, 1 page front cover, 1 page SRD, 2 pages of advertisement, leaving us with14 pages of content, so let’s take a look, shall we?

The being known as Cyrix now is not one that is discussed openly – indeed, the very existence of Cyrix is denounced by those in power – and yet, the accounts are there, accumulating for those willing to look. The tale of the creature is one of woe – Alka Kryszkaslawa and her lover Ivan Tobor rank among the finest minds in all the world – the duo of scientists/machinesmiths were geniuses beyond par – until Ivan passed away. Unbeknown to the general populace, both very also lovers with a taste for sado-masochistic games and when Ivan passed away, Alka was crestfallen.

What happens when a god-complex, a penchant for sadism and sadness drive a person to the edge of insanity? As a coping mechanism, she created a mechanical duplicate of her erstwhile lover, seeking solace and fulfillment in the arms of her creation, only to realize that her greatwork lacked the inherent drive, the personality, to fulfill her needs. Frustration grew, and her tendencies got more violent by the day, driving her to ultimately destroy her creation – every single night – and then rebuilding it in a perpetual spiral of disappointment and rage. And then, something unforeseen happened – whether by divine inspiration, by a curious glitch or an influx of energy, Cyrix started remembering – all its deaths, all the pain and suffering it endured. And from then on, its one goal was the construction of a body of its own and while it suffered destruction upon destruction, it finally managed to get into its body – with a grinning skull and mien shaped by abuse and suffering, it almost slew its creator and vanished.

And evolved. While at first, his basic statblock is CR 6, it already is self-aware, comes with a glorious full-color artwork, can fire flaming needles from its mouth and shock foes into stunned submission. And it only gets better (or worse) from there – at CR 11, Cyrix has upgraded its body with a chasis, produces an anticoagulant and has a deadly plasma cannon attached to its body. At CR 16, Cyrix further upgrades this version into a truly deadly adversary – btw. the form you can see on the glorious cover (and in the book as well – impressive indeed!). And then, there’s the CR 22-version – where Cyrix has managed to surpass the bounds of a singular consciousness and disperse its being amid a nanite-like swarm with a hive-mind that can emit deadly, disabling pulses and also highjack golems and similar constructed opponents.

That is NOT where the pdf ends, though: Cyrix, at CR 11, learns to create so-called necrotic golems (CR 8), a new monster that is essentially a mix of the dreaded Necrostructs and Flesh Golems – and all awesomeness. Alka (who also gets her own, glorious mugshot), in the meanwhile, has realized that her frail physical form might never be able to deal with Cyrix and thus ventured off on the path of the transmechanical ascendant. Her statblock, which clocks in at an impressive CR 15, thus combines this PrC with the Machinesmith for a deadly ally that might just be worse than the creature she has created.

And that is ONE of the possible stories for Cyrix. And half of the supplement. “What?”, you say? Yes.

Another version might be the following: Section Omega, the (anti-)psionic secret agency of NeoExodus sought a way to combine the vast knowledge of the intelligent extranet Kaga with the omnipresence of the Cavian hivemind via psionic matrixes – and, in their research. melded two contrary minds together, creating something new, something alien filled with self-loathing and fear and hell-bent on surpassing its physical bonds. Hence was born Cryix, as a rogue psionic matrix that was to be the only success and only inheritor of the boundless ambition of Project Apotheosis, of essentially creating a literal Deus Ex Machina – a God from the Machine. At CR 6, the rogue psionic matrix is weak still, able to pass on fragments of its own conflicted psyche, whereas at CR 11, things get interesting – Studded with a deadly energy projector that modifies the energy current power in rather ingenious ways as well as with a psychic shockwave that staggers its opponents. As with its first incarnation, CR 11 sees the advent of the creature’s chassis. Via the consumption of other minds, its CR 16 incarnation once again grows further in power, making its shockwave extremely lethal (possible unconsciousness – OUCH) and adding further  powers to its repertoire. And finally, at CR 22, Cryix actually IS the most powerful psionic entity in all of NeoExodus, has transcended the bounds of corporeality and seeks to devour all psionic minds with the ultimate goal of divine apotheosis, fulfilling the promise of the name of the project that created it.

Now if you think that’s it, you’d be wrong again – for Cyrix can replace the brain of living creatures with crystalline structures and annihilating personality (Cha dropped to one), but also creating observing drones -with a self-destruct killswitch. Yes. Detonation. Ouch. We get a sample character (CR 7) as well as the former  head of Project Apotheosis – one of Cyrix most powerful slaves at CR 15, who, again, gets a unique mugshot.

Editing and formatting are top-notch, I didn’t notice any glitches. Layout adheres to LPJr Design’s two-column, full color standard and is drop-dead gorgeous – I’ve said it time and again, LPJr Design products are some of the most beautiful out there. And there are artworks – oh, are there artworks. Drool-worthy artworks in gorgeous, iconic full color and so many of them – especially for such a low price, it boggles the mind. The pdf comes fully bookmarked and in two versions, with the latter being slightly more printer-friendly, but no less beautiful.

Where to start? Part Marvel’s Ultron, part Warhammer’s Necron, part ghost in the Shell, put in the blender, add some spice and author Jeff Lee creates something UNIQUE. Not content with providing an expertly written origin stories, we get actually TWO to choose from. We could have been served a regular, normal progression – but that would be the easy way and this pdf instead opt for the high road – in creating UNIQUE versions for every iteration that go beyond regular straight progressions and instead truly CHANGE the villain. The fact that Cyrix’ consciousness is not necessarily limited to a body (but to e.g. a mobius core) means that, much like, Ultron, it can challenge your players again and again, be vanquished and return stronger and changed – this indeed is a foe that can, if you choose so, harass your players throughout their careers. And then, we get supplemental NPCs, no less awesome than the main star of the pdf itself.

At this point, we’d already be looking at a massive winner of a pdf, at a full-blown recommendation. And then, we get the content times two: The psionic variant and its progression (fully Psionics Unleashed compatible, btw.!) as well as its supplemental NPCs take this pdf to a whole new level. Not content with simply saying “This is the psionic variant, have fun”, we instead get A NEW STORY, new NPCs, new builds with completely different progressions. That, ladies and gentlemen, is a whole new level and I can’t emphasize this enough, also a prime candidate for harassing the players throughout their careers. Now, with a minimum of work, enterprising DMs can even BLEND both stories, thus getting 8 (!!) statblocks for the same villain – each of them so unique that honestly, they might be referring to the same mind, but definitely not the same villain, with each iteration bringing new abilities and most of the time, new signature abilities to the fray. And then there’s the paranoia-inducing template.

I honestly didn’t think I’d ever write these words – but this is on par with the absolute apex. Surpassing all but my all-time favorite Pathfinder NPC Nameless Nil, Cyrix ups the ante regarding content, imagination and production values, providing one of the very best NPCs/villains currently available for PFRPG. This shares the throne with my all-time favorite. Yes. That good.

Even the oftentimes rather stigmatized sadomasochism, while not handled as something positive, at least is here no indicator of evil alignment, but rather only spiraling out of control due to grief and the lack of SSC with constructs as well as the god-complex of the creator – kudos for this tactful and mature, non-explicit handling (if not 100% to my personal tastes – I’m very much in favor of creating more awareness of SSC) of the matter. And yes, if the matter does not interest you, it’s sufficiently non-explicit to ignore it – so don’t let this tangent keep you from checking this out.

Beyond getting  these cool, unique statblocks and NPCs with stories that actually matter and are a good read as well as awesome artworks and production values, we get a significant amount of content. I’ve been waiting a long time for this pdf and expected to be disappointed by it – oh boy was I wrong. LPJr Design has managed to get EVERYTHING right. Nothing to complain – in fact, there’s no component of this pdf I would not gush about. Don’t let perhaps the coolest villain (with or without) psionics currently available for PFRPG pass you by. This is an easy 5 star + seal of approval pdf and one that is a candidate for my Top Ten of 2013. And yes, if I could, I’d rate this 6 stars – pdfs like THIS are what I’m reviewing for.

You can get this awesome NPC here on OBS!