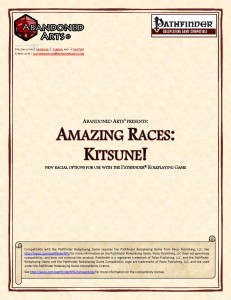 The pdf also provides us with a racial archetype, the White-Furred Oracle (WFO in this review). These Oracles later their bonus spells from their mysteries with an expanded selection of spells representing the Nine Mysteries. An interesting and mythologically sound decision is to replace the oracle’s star gem -when not HOLDING this gem, these Kitsune must make concentration checks to properly cast the respective spells, spell-like abilities or supernatural abilities – with the latter getting information for the DC of their concentration-check. Still – I’m not sold on this one. Why? Because I know what I’d do -I’d sunder and shatter the living hell out of that gem. And yes, it’s supposed to work analogue to arcane bond (including the additional spellcasting) – but that does not tell me what the gem’s hp and hardness are. When compared to some curses, this gem feels a tad bit too strong – plus, even when it is destroyed, the oracle isn’t truly crippled. While the caveat that all canines get the frightful presence versus the Kitsune is nice, it’s still not enough of a drawback in my opinion.

Especially since the oracle also gets 1/2 level + cha-mod ki points. Said points stack with other ki pools, but only apply attribute modifiers once. As long as there’s one ki point remaining, concentration checks are 5 (!!!) easier for the oracle and additionally, ki can be used to increase the DC of spells by +1, increase speed by +20 feet for a round. They may also spend ki to cast mystery spells by expending spell level ki without expending said spell. But the ability specifies: “WFO can cast one of her mystery spells or nine mystery spells as a full-round action without expending a spell slot by spending a number of ki points equal to the spell’s level”.

I have no idea what this ability is supposed to be doing. Cast 9 Spells at once if the WFO has enough ki points??? Come again? Are these expended? I have not the slightest idea – but even without this spell level/ki point exchanging, the ability is MUCH stronger than the exchanged 3rd level revelation.

Author Alexander Augunas (of Pact Magic Unbound-fame) is a big fan of Kitsune – and it shows. For the better in the fact that the crunch is tied to mythologies and offers iconic options. And for worse in the fact that this pdf shows a bit Mary Sueish (no offense meant!) preferences here and there -while none of the abilities (with the notable exception of the one case of ambiguous wording) are truly broken per se, they feel like they are on the upper end of the power scale and often times, especially in the case of the archetype, beyond what I’d consider balanced. The flavor is superb, as are the ideas of the crunch, but the price the archetype (or alternate racial traits) extol is not on par with the at times massive benefits they grant. While not being a bad example of his craft, it’s nowhere near what I expected after Pact Magic Unbound. In the end, this is an ok installment, but not a superb one. My final verdict will clock in at 3 stars.

You can get this supplement for Kitsune here on OBS!