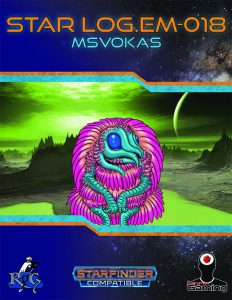 After the by now traditional introduction to the subject matter, we begin with the flavorful component of the presentation of the race. The “Playing as XX“-section, as before in the series, is the only missing component in this section that contextualizes the race within Starfinder. As before, if you’re interested in Rogue Genius Games and Everyman Gaming’s shared Xa-Osoro system, you’ll be in for a bit of a treat, as the section unobtrusively notes how the races works within this implicit setting. The msvokas, somewhat goofy-looking though they may be, as you can see on the cover, are pretty unique:

They get +2 Con and Wis, -2 Strength, and have darkvision and 4 racial hit points. They also get immunity to nonmagical radiation. +4 racial bonus to saves versus magical radiation and fire resistance 5. Msvokas are naturally radioactive with a radius of 0 ft., extending only to their skin. Btw.: Grappling these creatures can cause low radiation poisoning. Balance-wise, the radiation they cause doesn’t stack up, btw.

They can also unleash a radioactive ranged blast from their mouth, targeting EAC. Targets hit get a save or become poisoned by low radiation. If the msvoka expends Resolve Point, the blast ignores environmental protection versus radiation, though the usual +4 bonus such protections might convey is still applied. Here, things become really freaky, in a cool way: As radioactive beings that accrue toxic materials etc. within their bodies – after 6d4 months, these toxic substances begin breaking down their bodies, affecting them with the racial disease of isotopic degradation, which is based on Constitution, track-wise. It is incurable and cannot be distilled into doses. Now, here’s the thing:

When a msvoka rests for 8 hours, at the end, they can opt to undergo rebirthing, which turns their body to ash, cures the disease, and leaves a 1-foot egg with negligible bulk. The egg needs to be incubated for 4d6 days by a source of radiation; after hatching, the msvoka grows to adulthood in 1d3 days. Rules for infant/toddler-stages are noted, and upon reaching adulthood, the reborn msvoka regains the respective abilities. This rebirthing process may also be initiated upon dying, though at the cost of 2 negative levels added to the process. Death effects or accumulating negative levels, or falling to isotopic degradation, are the exceptions from this. Destruction of the egg also eliminates the msvoka.

Notice something? Yeah, the racial hit points, alas, are missing from the write up in an obvious and unnecessary oversight. The pdf also comes with a racial feat, Radiation Flare, which allows you to spend Resolve to extend the radiation aura – cool!

Editing and formatting are very good on a formal level; on a rules-language level, the lack of the racial hit points are the one serious glitch here. Layout adheres to a two-column full-color standard and Jacob Blackmon’s artwork for the race is great. The pdf has no bookmarks, but needs none at this length.

Alexander Augunas’ msvokas were already one of the coolest races I have seen in a long time – now that the glitches have been purged, this is a true masterpiece! One of the most unique and evocative races I have ever read, this manages to get 5 stars + seal of approval. Oh, and I love it to the extent that the revised version gets the chance to make an appearance on my Top Ten of 2018.

You can get this inspired, slightly flawed race, here on OBS!