Animal Races: Clan of the Goat

Animal Races: Clan of the Goat 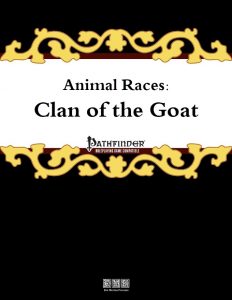 The clan of the goat encompasses more than goats; sheep etc. are included…and the pdf has some intriguing cultural peculiarities – the clans know, for example, 4 genders, with pregnant females and infertile males being their own genders. Similarly, to wear or not to wear shoes is an important ideological statement! It is these little tidbits that make sense, that make these come to life! Muskox are mostly neutral, sheep mostly good and lawful and goats mostly evil and chaotic, tapping into the iconography of real world religions and blending them in a smart way with the race’s flavor.

Members of the clan of the goat, these guys are medium humanoids with the faun subtype, gain low-light vision and a +1 natural AC-bonus that increases to +2 at 10th level. The race receives 5-ft-scent that increases in range to 30 ft. at 6th level and a gore attack for 1d4 as a primary natural attack (1d3 if the character is Small). The character may choose to be either Medium and gain +2 Str, -2 Wis or be Small, with +2 Dex and -2 Str. Members of the goat clan receive +2 Int and speak Infernal as a bonus language,. They may also choose Goat Clan Heritage instead of a witch hex. Mountain Goats begin speaking Terran and gain +2 Cha and may select Goat Clan Mountaineer instead of a oracle’s stone or wind revelation. Muskox members begin play speaking Sylvan and gain +2 Cha and may select Goat Clan Heritage instead of an oracle’s nature revelation. Finally, sheep clan members gain +2 Cha, speak Celestial, with the option of gaining Goat Clan Heritage instead of a paladin’s mercy.

As always, the race taps in its flavor into the respective Racial Heritage-feat-mechanic: To recap, if this is the first review of a pdf of this series you read – basically, they provide a selection of different abilities; the more often you take them, the more you get to choose and once you have enough of them, you unlock more powerful options, though they have a scaling prereq-caveat that prevents abuse via feat-heavy classes. The Goat Clan Heritage feat allows for the selection of climb, fast movement, improved gore, scavenger (the latter netting immunity to ingested diseases and poisons and being nauseated or sickened from eating something like that); once all of these have been taken, you can choose powerful charge. Goat Clan Mountaineer allows for the selection of climb, cold resistance, improved gore or scavenger, with powerful charge as an unlocked final option. The pdf also provides three more racial feats: Gruff Demeanor is a bland, +2 to two skills, later +4 at 10+ ranks skill-bonus feat. Scapegoat allows your familiar to intercept lethal attacks, while Troll Slayer can temporarily negate a creature’s regeneration, which is pretty cool.

As always, the pdf has an assortment of different, cool notes on genealogy and the respective fantastic creatures of PFRPG and how they interact with the clan, firmly entrenching the race in the fantastic context of the game. Oh, and age, height and weight tables are included, though there are no favored class options. The pdf also features the write-up for the deity Amon, another divinity who claims the title of Eye of Ra.

Beyond this well-written write-up, there is a nice CR 8 creature, namely the Krampus, including chain armor, swallowing burlap-sack and child-scenting. One of the best iterations of the creature I have seen so far!

The pdf, as always, sports the cool heraldry traits that, in power, slightly exceed regular traits, but include minor penalties to offset the power of the benefits they convey. In a cool thematic aspect, they this time around not only include feats, but also a select array of hexes. The pdf also includes a cool oracle curse – instead of succumbing to fear effects, the character falls asleep, faints, and after awakening, the fear (and later charm etc. effects) suddenly vanish. Nice one!

Eric Morton’s Clan of the Goat is really interesting – while I wished the pdf was longer and had even more material to provide cool angles to the interesting race featured herein, it does contain well-balanced, fun options that should be viable for pretty much every game. The flavor and prose are concise, the vision consistent – there is nothing to seriously complain about herein. My final verdict will clock in at 5 stars.