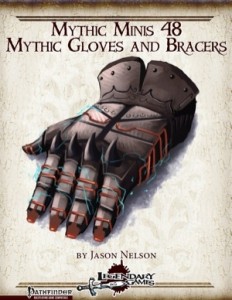 -Arcanamach’s Vambrace: Magic Vestment that counts as mithril; characters with Arcane Strike may use that bonus to CMD instead of as a bonus to damage and also enhances Arcane Strike-powered aid another. Additionally, the weapon wielded counts as silver and magic and the bonuses granted by the feat may be extended to allies when attacking the same creature. Mythic characters get improved action-economy and numerical escalation. Pretty interesting design!

-Razor Couters: Add damage and bleed to unarmed attacks as swift action; When fighting defensively, this damage can also be caused as an immediate action. Additionally, the item can be commanded to launch wounding shuriken, with the amount launched depending on the action used. Mythic characters inflict bleed that is difficult to heal – pretty damn cool!

-Errant’s Gage: When using challenge, smite or the like, using this item provides for an increase in potency of the ability and mythic characters see even more significant bonuses – like it!

-Felonious Fingerless Gloves: These gloves are well-glamered and easy to hide, helping with all kinds of roguish behavior and increase the effective level for trap-related abilities and rogue talents based on level. Mythic characters may even reroll Disable Device or Sleight of Hand-checks when using mythic power. Finally, tricksters gain the crime spree ability – straightforward, but nice.

-Serpentiginous Gloves: Pernicious and accelerate poison (alas, non-scaling DC) – but the touch-delivery crunch works well, so that’s a plus. Oddly, the hyperlinks for aforementioned effects render the letter a larger font, which looks a tad odd. Mythic power can be used to animate the fingers of the gloves like vipers to deliver poison effects – solid, I guess, but the fixed DC is pretty weak and low.

Editing and formatting are good, I noticed no significant glitches apart from the font-hiccup, which does not influence the crunch and thus, not the rating. Layout adheres to Legendary Games’ 2-column full color standard and the pdf has no bookmarks, but needs none at this length.

Jason Nelson’s gloves and bracers range from the very cool to the rather limited and can be considered worthwhile additions to a campaign, though ones that perhaps are not per se mandatory – the items are well-crafted and juggle complex mechanics, but did not 100% blow me away. Hence, my final verdict will clock in at 4 stars.

You can get these nice mythic gloves and bracers here on OBS and here on d20pfsrd.com’s shop!
Endzeitgeist out.