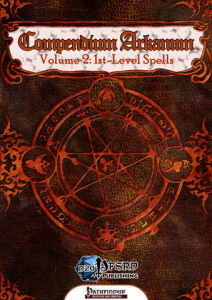 This installment of the Compendium Arcanum-series clocks in at 80 pages, 1 page front cover, 1 page editorial, 2 3/4 pages of SRD, 1 page advertisement, leaving us with 74 1/4 pages of content, so let’s take a look, shall we?

So what do these modifications do, exactly? Well, for one, we receive de/increased durations – downgrades to rounds/level or upgrades to e.g. hours/level can be found herein – and especially the latter escalation is pretty nasty – when abundant ammunition can easily be made almost permanent, the rationale behind NOT doing that for every military ever to conserve ammunition suddenly becomes pretty problematic. Conversely, longer air bubbles and more creatures affected render the spell much more useful. Choosing the sound of an alarm or alarming more creatures adds a cool level of flexibility to the spell.

Other modifications influence the range of the spells and e.g. adding commands to animate rope, including movement and climbing makes for great ideas. Other spells receive a better action economy or add descriptors in heightened effects for new options. When the pdf goes for an extension in breadth rather than for numerical escalation is when it shines. On the downside, e.g. burning hands not only increasing the reach to 20 ft. but also adding the “shaken” condition may be a bit much – also, the wording is odd, with the text specifying “action” instead of turn. Indeed, here and there, the new effects do not properly modify the base spells – the heightened effects of command, for example, get rid of the language-requirement, which should thus eliminate the language-dependant-descriptor from the spell, which it RAW doesn’t.

True Strike‘s heightened/diminished versions constitute an example for classic numerical escalation – the heightened increasing the bonus to +30, the diminished decreasing that to +5. On the plus-side, some spells have been merged into one component entity and this is noted – usually, these tend to constitute the better examples of design herein. Magic Missiles provide additional missiles at higher levels, whereas the diminished version only provides one close-range missile at 1d3 damage.

Editing and formatting are very good, I didn’t notice many glitches – quite a feat in a book of this size. Layout adheres to a printer-friendly 2-column full-color standard and the pdf comes with massive, extensive bookmarks as well as copious hyperlinks to d20pfsrd.com.

Timothy Wallace is a competent designer and this pdf very much showcases a couple of his strengths – the instances wherein the spells go into the breadth are downright glorious in very subtle, interesting ways. That being said, this installment, alas, is also one of the worst examples of subtle power creep I’ve seen in ages. Beyond the added flexibility the spells offer and the one or two examples that can potentially break in-game logic, which can admittedly be ignored, the pdf fails to address a significant problem, one that imho is rooted in 3.X design-philosophy. See, in 3.X, cantrips and the like adhered to the same rules as full-blown spells. In PFRPG, they are NOT expended upon being cast. Beyond the massive added flexibility, this utterly ruins any semblance of balance one can assume – take true strike: Infinite +5’s, with only action economy as a balancing factor, this definitely goes beyond what a 1st level character should have at his disposal. Color Spray would also be an offender in that regard and infinite, force-damage at range via magic missiles is another “urgh”-moment that made me shiver. The diminished version definitely needs a weaker damage-type, an attack roll- whatever.

Don’t get me wrong – this is an interesting pdf, it really is. The base system is great and Timothy Wallace is a talented designer, but I feel it falls flat on its face with the utter cluster-f*** that the vastly increased cantrip-array represents. Indeed, the problem is not only the added flexibility, it is the sheer balancing of the cantrips versus existing ones, with the diminished spells continuously outperforming the original cantrips. Furthermore, the diminished spells among themselves cannot always be considered balanced. I really enjoyed the first installment in the series and to see this one come apart to this extent has been pretty jarring. I cannot recommend this installment of the series, as much as I enjoy quite a few design-decisions herein – the balance-concerns are simply too pronounced, even for high fantasy gaming. That being said, at the same time, this does not deserve the slap in the face that is a 1-star rating -there are good ideas to be scavenged herein. Hence, my final verdict will clock in at 2 stars, while I hope for a return to form with the next installments.

You can get this interesting, but flawed installment here on OBS and here on d20pfsrd.com’s shop.