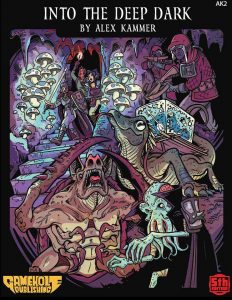 This module clocks in at 43 pages of content, 44 if you count the gorgeous full-color map on the inside of the front cover. (The inside of the back cover has btw. one of the most hilarious images I have seen in all my years as a reviewer, also in full color, but that as an aside.)

This review is based on the softcover version of the module, which was sent to me in order to expedite the reviewing process and move the module up in my queue.

Okay, so first things first: This is an Underworld adventure, if the cover didn’t provide ample clue for that. There are, roughly, two different types of Underworld, though – and we should talk a bit about them. Many gamers will probably agree that the notion of the underworld remains one of the strongest, most fantastic vistas that came out of our beloved hobby. But, whether you call it “Underworld”, “Underdark”, “Deep Below” or by some other colorful moniker, there are roughly two types of subterranean vistas that are truly amazing, at least as far as I’m concerned…and for completely different reasons.

This first type of underworld has long been neglected – the truly strange and alien vistas, the dark and potentially horrific below, the depths where things are radically different from anything surface—dwellers may know; the place where godlings sleep and the strange rules. This type of underworld has long been neglected and only hinted at – these depths are only highlighted in precious few books, for example Frog God Games’ superb Cyclopean Deeps duology.

The second type of underworld is no less wondrous, though perhaps a bit more familiar: This would be the type of world that we first think of, when we hear the word: The realm of subterranean kingdoms, where drow and illithids duke it out; the places where the many modules take place. Here, we have functional economies, dwarven holds and a region that is both alien and familiar. This region is no less inspiring, though in a completely different manner; it allows for relatively easy insertion of PCs, sports strange player options, etc. – but unlike the lightless hell of the true depths below, it is very much a strange, yet relatable vista, a country we can’t visit in real life, as it does not exist. Sure, many beings are evil here, but surface dwellers can generally function in their usual capacities and while the world is more dangerous, it also still sports a lot of amenities, if ones seen through a peculiar lens of strangeness.

This module would be firmly rooted in the second tradition of the depiction of the underworld, but does so in a tone I get to see relatively rarely; you see, many settings make the underworld a kind of evil ghetto (AAW Games’ Aventyr would be a notable exception here) – this module, much like some old-school underworld books, adds, to an extent, a slight touch of whimsy and wonder to the proceedings and makes that the central angle.

Okay, beyond that, it should be noted that this module is the sequel to “The Brain -Gorger’s (aka: Illithids minus WotC IP) Appetite” and may be run as such, though this is by no means required. We (re-)join our heroes in Ockney’s Hold, as the Baron has regained use of his senses, and as certain…individuals are arrested.

All righty, only GMs around? Great! So, it seems like the PCs managed to foil the plans of the brain-gorger Marlipp – the Baron has regained his senses, but is not particularly happy. He wants the brain-gorger as dead as a doornail. Yesterday. Hence, the PCs are tasked to hunt down the fugitive mastermind and set off towards the underworld. (In case none of the PCs speaks Undercommon, a somewhat handwavy and convenient potion-solution is presented, though personally, I’d prefer PCs trying to pantomime…anyways…)

The trek is pretty uneventful apart from a couple of kobolds and the descent into the lightless realms similarly isn’t too tough, though the battle with a Chuul may well test the adventurers and show them that this place is nothing to be trifled with…and then, the PCs meet one of the most amazing characters I’ve seen in a while. Atop a riding lizard, there is Zanthos. Zanthos is a gelatinous cube that identifies as female. Of sorts. She is also curious, funny and utterly strange. The lavishly detailed dialogue with her provides fully guidance for the GM, with sample Q&As. I love this section. Really fun…and funny, even! How often do you get to talk to a friendly gelatinous cube?

The cube also offers some helpful information, if asked the correct questions, and thus, the PCs are off to Dun Delve – en route, they just have to survive a deadly drow ambush and meet a svirfneblin trading caravan (they btw. use giant mole-like things as beasts of burden)…and a couple of other things. If they get off track, you’ll have a couple of nice sample encounters as well…including one with a greater flail snail. Anyways, the PCs will sooner or later reach Dun Delve if they don’t fall prey to the dangers of the subterranean realms.

Dun Delve is massive…and prejudiced murderhobo PCs will have a very tough time; the focus here is on keeping a low profile and good roleplaying…which is evident from the get-go, as a wererat questions them…and may well yield information. The exploration of the stronghold will also bring the PCs to a drug den, where e.g. two Brian-gorgers are currently taking their drugs – the fully depicted scene is hilarious. I mean it. It almost looks like one of the tentacle-headed monsters is at the psychologist, only that the psychologist is currently holding a hookah-pipe and imbibing. The doofy look in their eyes and whole scene…I don’t know what it is, but it is deeply comical to me. This is further enhanced by the fact that this is NOT a combat encounter – the PCs can actually get quite a lot of information out of the stoned brain-gorgers; Marlipp seems to believe that the Great Brain will save him – and hence is en route to the Brain-gorger city of Quinthrall!

Thus, the PCs are on the road once more – they have to pass fungal forests, deep ones (including a dragon eel)…and finally confront Marlipp! The brain-gorger hasn’t fully recovered from his addiction, but remains a formidable foe – whether the PCs best him or are bested, some mages gate in and capture the creature…but leave the PCs a seal of introduction and invite them to city of Trilllium. Seems like the PCs have just attracted the attention of the mighty Ceaseless, while also satisfying the Baron’s command!

The module comes with a handy monster appendix (including descriptions etc.) a nice hand-out that represents the invitation at the end, and we get a proper, player-friendly version of the amazing Dun Delve map – big kudos there! The module closes with a brief one-page gazetteer of Dun Delve.

Editing and formatting are very good, I noticed no glaring issues. Layout adheres to an elegant two-column b/w-standard and the artwork deserves special mention: With Erol Otus, Jeff Butler, Terry Pavlet, Jason Braun, Del Teigeler, Britt Martin, Jeff Easley, Diesel LaForce and Dan Fransee, we have some amazing talents here. The cartography by Dan Fransee and Lloyd Metcalf is also excellent. The softcover booklet comes with a nice, glossy front and back and the interior paper is nice quality as well – no complaints there!

It took me quite some time to fully digest what it was about this book that appealed so much to me; it wasn’t the subtle humor, nor was it the weirdness – I’ve seen both done in less subtle, more in your face ways. In fact, writing this review, I realized that, ultimately, Alex Kammer’s second module is, as a whole, stronger than the sum of its parts. Yes, it is a pretty linear exploration, one with a few hub-scenes; it has a good mix of challenges…so why did it work so well for me?

Okay, so here’s my thesis: This is the module-equivalent of a road-movie through the underdark. We embark, we visit wondrous places, meet quirky characters…and the road moves on. There are hubs, waystations if you will; wondrous vistas that hint at more – yet, the journey is subservient to the need to go on, to find the target. The resolution of the module, which might have been frustrating if presented in another context, feels oddly fitting for the adventure: It is the journey that matters, not the result. At the end of this adventure, the PCs will have seen wondrous vistas and strange things, both wondrous and dangerous. As someone who adores roadtrips and the whole genre, this feels fitting, and, as is my contention, very much deliberate. This whole structure works too well for that mold, that type of thinking, to be coincidence. It is only in hindsight, with a bit of analytical distance, that I can appreciate how these elements come together to create an atmosphere that is uncommon and wondrous; This journey is sometimes funny, sometimes dangerous, but, most of all, it is worth embarking on.

You can get this neat road-trip through the underworld here on OBS!