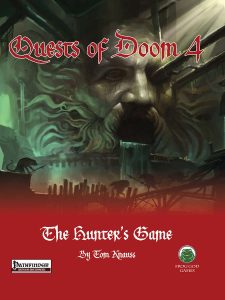 So, “The Hunter’s Game” sounds familiar? Well, the module was originally penned as part of the criminally underrated series of environmental sourcebooks penned by Tom Knauss. To be more precise, this module originally was released as one of 3 modules in the “Marshes of Malice” swamp sourcebook, which I also own. Unlike the modules in “Mountains of Madness”, the adventures featured in “Marshes of Malice” do not constitute a mini-AP of sorts, which is good news for standalone presentations like this one.

Anyhow, “The Hunter’s Game” is an old-school module, and as such, it is not necessarily easy – careless player characters will die – horribly. There is one particular encounter that can be rather brutal. The adventure is penned for a 4th-level party, and I’d suggest 6 PCs, which should form a coherent unit with the expected combat capabilities. You don’t need to be super-optimized to beat this, but you need to be competent at what you’re doing.

The module is steeped pretty deeply in the lore of the Lost Lands-campaign setting, but all the background is easy enough to ignore, should you choose to go that route. The background lore sports some minor, Easter egg-like connections to the classic Glades of Death hardcover for 3.X (the proto-environment hardcover book, if you will), as well as to the Death in Dyrgalas-adventure featured in the first Quests of Doom hardcover. For lorehounds of the Lost Lands and parties that have been playing these modules for a while, that’s certainly a nice touch. If that’s not your cup of tea, then you can ignore much of the very detailed background story when you adapt this to your setting, and do so without running into issues. The module sports some readaloud text, but not to an excessive degree – this is definitely a module suited for experienced GMs, and one that should be properly prepared. On the plus-side, and that’s a BIG plus as far as I’m concerned, the module does offer troubleshooting advice for PCs looking to hire NPCs for their magic capabilities, etc.

The module comes with regional and local maps in b/w, as well as a local map – which is one of the big downers of this stand-alone version of the module. You see, in the original iteration, there were player-friendly versions of all maps provided. These are nowhere to be found. Worse, the final part of the module has the PCs happen upon a crude map handout. With a player-friendly map, they then could explore the locality, and find the relevant places. This handout version of the map has been cut – though references to it are still very much in the module’s text. That’s a huge downer, as far as I’m concerned, because it was what made the final section of the module interesting. On the plus side, the random encounter section has been cut down – the original featured cross-references to Marshes of Malice’s copious environmental hazards, which includes poison sumacs, microorganisms, etc. – these references have been cut, so no dead “links” here. On the downside, these aspects, well, have been cut, which takes away some of the really cool and immersive environmental features.

That being said, the adventure is pretty uncommon, in that it essentially is a mystery/investigation scenario that’s not set in a city, but rather in a pretty unique and novel environment. It is also well-researched regarding animals and biome. It should be noted that I strongly suggest this module for veteran players – solving the adventure becomes significantly more likely if the PCs know what they’re doing and engage in proper legwork. Unlike many published modules, this one does assume a degree of competence and intelligence on parts of the players, which is a big plus in my book.

The Answin Lodge is a success story: Erected by a naturalist, it allows wealthy visitors to the Dyrgalas Fens to learn about the unique fauna, and the naturalist Brock Answin is certainly making a case for crocodiles; heck, he is allied with lizardfolk, making him a pretty positive figure as a whole…and still, people vanish. And the disappearances are accumulating – so hopefully, the PCs are doing their legwork before embarking on the journey to the Lodge….for, at the start, the PCs can question former guests of the Lodge and engage in some serious detective work by cross-referencing statements. Indeed, since the modus operandi of the adversaries includes the use of magic, that aspect is covered as well and hinted at. I *really* loved how this entire section sets up the rest of the module.

And the investigation, provided the PCs make it to the Lodge, is similarly interesting: Brock (who has btw. a crocodile animal companion) and his crew are probably prime suspects at this point, but the matter of the truth is that he’s innocent; indeed, his operation has been compromised in a rather interesting fashion: Clever players will notice a discrepancy between the numbers of crocodiles featured, and indeed – that’s the core of the issue. One of the lizardfolk retainers (who are not working here as long as Brock claims they do) is pretty devious and has been spreading the were-crocodile strain of lycanthropy, which Brock has resisted so far. In essence, a group of villains has co-opted Brock’s operation as a front for subtle abductions of individuals, which are then sold off to several really unpleasant parties in the Dyrgalas!

The combination of the perpetrators (who have pretty neat builds) is the aforementioned steep spike in challenge – if the party is ambushed by the entire cadre of foes, they’ll have a VERY brutal combat on their hands. But then again, if that happens, they’ll have botched the investigation – reap what you sow…so yeah, the investigation, with the colorful people at the Lodge (which is fully mapped), tours etc. – it all comes together in a genuinely cool and fun investigation.

In the aftermath of the attack, provided the PCs survived the exceedingly dangerous villains, they’ll have an impromptu, crude map, which they then use to track down the green hag Grizelda, the Cyclops Bruseus, and two harpy sisters, hopefully rescuing as many innocents as possible. The fun aspect of this extended denouement, at one point, was using the handout and the player-friendly map while exploring the swamp to find these targets – and this aspect is pretty much completely lost in this stand-alone iteration, as both handout and player-friendly map are missing.

Editing and formatting are very good on a formal and rules-language level, though the references to the cut handout sting. Layout adheres to Frog God Games’ printer-friendly two-column b/w-standard, and the pdf comes with nice original artworks in b/w as well as bookmarks. The map-situation is a big downer: The original hardcover featured player-friendly versions of all maps of the adventure, and their loss is a pretty big downside in this iteration. Moreover, the cut handout, in conjunction with the loss of said maps deprives the final section of what made it unique and fun.

Tom Knauss’ “the Hunter’s Game” deserved better than what it got here; its original iteration was an impressive adventure that played really well and made great use of the swamp-rules. Losing the hazards and the like is a minor blemish, but wouldn’t have had a serious impact on my verdict. However, the fact that the handout, and as such, the thing that made the finale rewarding and unique, has been cut? That’s a HUGE bummer and makes the finale feel less like a turning of the tables, and more like busy-work. In short: The finale loses most of its impact and consequently becomes a low-key series of planned encounters sans the novel framing.

And this is a pity, for this is per se an excellent adventure – if you can get your hands on Marshes of Malice, go for that version; it’s pretty much a 5 star + seal adventure; this stand-alone iteration, though, not only loses the minor components you’d expect it to, the finale is severely compromised in how well it works. As such, it should be taken as testament to how much I like the module per se that my final verdict for this stand-alone version still clocks in at 3.5 stars, but I can’t bring myself to rounding up.

While my review is based on the PFRPG-version, this module also exists in two more iterations. I don’t have them, so I can’t comment on those.

The OSR-version (for Swords & Wizardry) can be found here!

If you find my reviews useful, please consider leaving a donation, or joining my patreon. Thank you.