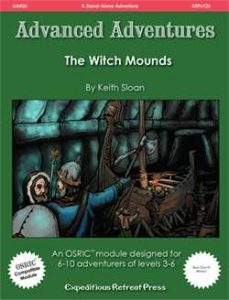 This module, as always for the series, was penned with the OSRIC-rules in mind; as always, we have some deviations from OSRIC’s formatting standards, though – there are no italics in the formatting for things traditionally formatted thus, instead using bolding indiscriminately for spells, creatures and items. This module is not always consistent when doing so, missing a few references. The module, as always, features no read-aloud text, and otherwise adheres very much to the classic standards and presentation, including fonts used, etc.

The adventure is penned for 6-10 characters of 3rd to 6th levels, with the adventure suggesting a few fighters and a cleric at least; while not required per se, I’d argue that classes with anti-undead tricks in particular, will contribute to the party’s survival. The surface and dungeon levels feature their own random encounter tables, which also feature some instances for dressing. Themes featured are a more complex question, and in order to go into that, I have to discuss the details…Hence…

All right, only GMs around? Great! So, “The Witch Mounds” kicks off in a pretty exciting manner – we have an ancient Maerling burial site, eponymous mounds. What are Maerlings? Well, consider them to be essentially evil Vikings in aesthetics, which is also supplemented by the new monsters: We have the svart-alfar, which are basically the nasty dwarf-like figures of Norse myth, northern trolls petrified by light, and the haugbui, which are basically undead einherjar with berserker rages – not per se exciting, but thematically fitting, and the module plays this theme well – the great mound among the surface features sports the first of runic carvings written in the Maerlings’ Frost tongue, and these are certainly flavorful. Things get better, when the PCs inspect the massive ship inside the burrow: Proper interaction teleports the PCs into the dungeon proper, and initiates a cooldown, so for some time, the PCs will be down below.

At this point, I was genuinely on board with the whole thing – I mean, how cool is the dark twist on th familiar, Norse mythology? The grave ship teleport? That’s damn cool! And the dungeon per se, structurally, is non-linear, covers two levels, and almost 90 keyed locales, so plenty of space for cool stuff! There are two mazes, talking doors (with solid riddles!), and classic tricks like disorienting teleporters. There is an arena, where the foolhardy can test their mettle in duels versus potent monsters and gain a mighty, magical sword if they best the arena’s master…and that’s pretty much all the positive things I can say about this module.

You see, in the dungeon, the Norse theme established above falls pretty much apart and is relegated to window-dressing. The haugbui chief is called “Jormungandr” and has a winter wolf, who is dubbed…no, not Fenrir! Hate. The fellow is called “Hate.” There is an evil cleric called “Thursasprengir.” If that got a groan out of you, well, it did from me. The svart-alfar chieftain is called “Huldra.” Here’s the thing: A Huldra is a very distinct creature in folklore. It has nothing to do with svart-alfar. The dungeon btw. also features a medusa, minotaurs, etc. Oh, and in spite of the module sporting a new deity, there is a shrine of Loki that has deck of many things-lite-like effects. So, is it a new cosmology? Is it the one we’d associate with quasi-Norse cultures? No idea.

Beyond the ship teleport, the dungeon suddenly turned into a funhouse-type operation that seriously gave me whiplash. I don’t object to modules making use of all that D&D has to offer, but when you coat everything with a Norse layer, including appropriating names/nomenclature, why not go all the way? The whole Maerling culture presented, to me, feels like an ill-informed patchwork of someone who only has rudimentary ideas; it is an appropriation that doesn’t sport the attention to detail that’d make it come alive. This is in as far problematic, as information and logic pertaining stuff like that informs how we play.

As another example, let’s take the best of the new magic items, the barrel of endless mead, which ahs a good chance of forcing you to drink until you’re utterly wasted. That is reminiscent of Thor attempting to drink the oceans, right? It’s also potentially funny. So why is there nothing in the dungeon that rewards being drunk? Why are trolls and svart-alfar essentially kill-fodder? I can see the haugbui, kinda…but they are another wasted chance. Inverse einherjar? Cool! Drinking with the undead to not get slaughtered, appealing to twisted senses of bravery and honor – this concept has SO MUCH POTENTIAL.

To be 100% clear: This is not a bad dungeon, but it feels like the dungeon was attached to the surface, with all cultural references just added with a VERY thin coat of paint on it. After the evocative start, we get a pretty unfocused dungeon through which you murder-hobo. I haven’t seen a premise this strong wasted this thoroughly in a long, long while.

Editing is very good on a formal and rules-language level; formatting is less well-executed. Layout adheres to the series’ two-column b/w-standard, and the pdf sports b/w-artwork and serviceable b/w-maps. No player-friendly versions of the maps are provided. On the plus-side, the pdf comes fully bookmarked.

Keith Sloan’s “The Witch Mounds” started super-strong and genuinely had me PUMPED. The surface area and means of entering the dungeon? AMAZING.

Unfortunately, that’s when the module drops the ball big time; it is inconsistent when taken as a Norse-themed module; when arguing instead that it’s supposed to be its own culture, it’s too derivative without being interesting. It felt like the author had some cursory pop-culture familiarity with some Norse stuff, and then called it quits without elaborating/expanding. The base angle and pitch this must have had? I can see that working very well. The execution used here, though, is less than inspired, and frankly, annoyed me. Even the “unique” challenges are paint-by-the-numbers old-school design 101: Riddle-doors? Check. Arena? Check. Evil temple? Check. Random weirdness for great gains or losses for the group? Check.

This is not just a disappointing dungeon due to not being “authentic” – I don’t necessarily want that! It’s annoying and disappointing because it throws references at us, but does so in a way that feels just wrong…and then doesn’t contextualize these references in new and interesting ways. This is easily one of my least-favorite modules in the whole series, a tonally-inconsistent and unfocused crawl. I’d recommend most adventures in the series over this one. My final verdict will clock in at 2.5 stars, rounded down.