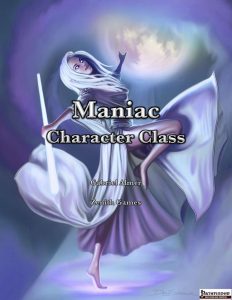 This class clocks in at 23 pages, 1 page front cover, 1 page editorial, 1 page SRD, leaving us with 20 pages of content, so let’s take a look!

The maniac class gets d6 HD, 2 + Int skills per level, ½ BAB-progression and good Will-saves, as well as proficiency with simple weapons. Armor hampers the maniac’s spellcasting, which draws spells from the sorcerer/wizard list, using Charisma as governing spellcasting ability score, using that ability score instead of Wisdom or Intelligence for the purpose of e.g. telekinesis. The spellcasting is spontaneous, and unlocks the whole array of spells, up to 9th spell level. We begin play with 3 spells per day at 1st level, and that scales up to 6 per day for all spell levels except 9th. Maniacs can sacrifice unused spell slots (excluding 0-level spell slots) for emotive blasts as a standard action – these are handled as melee touch attacks, or as ranged touch attacks with a range of 30 feet, and inflict 1d6 nonlethal damage per spell level, explicitly bypassing DR. The effect is psychic, and can’t affect creatures immune to mind-affecting effects. Aesthetic issue here: The ability RAW should specify that only maniac spell slots can thus be converted. At 11th level, the base damage die of these blasts increases to 1d8, and the blast may deal lethal damage (should be typed, imho).

At 1st level, the maniac chooses a mania, with save DCs if applicable being the 10+1/2 class level + Charisma modifier formula; each mania has an emotion aura and a quirk – the quirk is always in effect, and each mania is associated with an array of bonus spells, which are added to the spells known list, but only while raving; in that state, the character also gets the mania powers and drawbacks. So, what is this raving bit about? Well, for up to 4 +Wisdom modifier rounds per day, +2 per class level attained, the maniac can enter a kind of magic rage. Temporary increases of Wisdom do not count for these purposes, and entering a raving state is a free action. While in this state, the maniac is treated as having Eschew Materials and casts spells as a psychic spellcaster, using emotion and thought components.

This explicitly does not prevent the casting of maniac spells due to emotion components, but can prevent casting spells from other classes. After ending a rave, the maniac can’t re-enter one for 1 minute, preventing cycling-abuses, and the character is shaken AND casting spells requires concentration (DC 15 + double spell level); I’d have liked a note on how this interacts with casting defensively. Calm emotions and analogue effects, as well as unconsciousness end the rave.

While in this state, as noted, the emotive blast carries the drawback as well – in the instance of e.g. the anger mania, that’d be an inability to use Charisma, Dexterity or Intelligence-based skills or any ability that requires patience of concentration. Manias also net you mania powers at 1st, 5th, 9th, 13th and 17th level. To give you an idea of what these do, let’s continue looking at the anger mania: At 1st level, when a target makes their save against your spell, you may, as an immediate action, declare the target to be the source of your anger. The next spell you cast before the end of your next turn is Empower Spell’d sans casting time increase, but only with regards to this target. Okay, how does this interact with AoE-spells? Why does this still RAW sport the spell-level increase? At 5th level, we have a reroll for one Will-save per rave; at 9th level, full damage to objects with blasts, including ignoring some hardness; 13th level net a minor rage aura, and 17thlevel the means to immediate action reroll CL-checks to overcome SR.

Beyond anger, we have boredom, compassion, confusion, courage, curiosity, desire, disgust, envy, fear, grief, hatred, joy, love, pain, pride, regret, surprise and tranquility as manias. Tranquility nets you a focus that you can expend (somewhat akin to psionics); surprise has the means to enter random manias; regret lets you redirect your spells, contingent actions etc. Pride can net you reduce gazes…you get the idea. As a whole, I was positively surprised by the manias featured herein. Considering that they essentially represent linear ability suites, they offer a surprising amount of diverging playstyles and character diversification. Few maniacs will feel like each other.

This becomes particularly interesting, since 3rd level offers the invoke mania ability, which lets the character rave with another mania; the choice must be made at the start of the day while gaining spells, but in those secondary manias, the character is treated as two class levels lower.

The class also features the telempathy ability at 2nd level, which lets them convey simple emotions in 30 ft., as well as granting +1/2 class level as a competence bonus to Bluff. 7th level nets at-will analyze aura, which, at 15th level applies benefits to all targets in a 60-foot cone. At 9th level, we get the emotive shield, which lets the maniac sacrifice spell slots as an immediate action to get a deflection bonus to AC equal to the sacrificed spell level, as well as a morale bonus to Will-saves of this amount. At 19th level, this extends to all allies within 10 ft., and nets a 15% miss chance versus ranged attacks, +5% per level of the spell sacrificed. The capstone ability nets indefinite raving with the primary mania, and +2 to Charisma while raving.

The class comes with two supplemental feats: Auratic Synergy penalizes creatures with the same emotion aura as you; Emotive Spell (Metamagic) can be applied to spells dealing the four core energy types, converting half of it into untyped psychic damage. Favored class options for the core races are provided – no issues with these. The pdf also features 5 archetypes, with the first being the Affector, who loses the flexibility of invoke mania, with the 3rd level ability to make the emotive blasts deal splash damage; at 5th level, we have the means to use them as cones, and 9th level allows for the use of one metamagic feat from a list. 13th level lets you rebound blasts, and 17th level lets them use metamagic feats with mania bonus spells with the normal casting time. 5th and 15th level net a bonus feat. Solid engine tweak.

The fractured soul is genuinely cool. These fellows have multiple personalities, which emerge in raves, potentially remaining in control after raves; while this does include some permanent penalties, it delimits the mania choice, which is VERY powerful and should, at least re bonus spells, have some limits. Instead of the analyze aura ability, we have the means to shake off enchantments and possessions. Okay, what about the upgrade of the ability? It RAW does nothing for the archetype. Furies get claws that are enhanced, a kind of rage and ivy gowns – I Like this re themes, but for a ½ BAB and d6 HD, this archetype is a BAD idea; without more staying power, this begs for death. The Korybant is a divine-themed brad-crossover, with limited performances instead of invoke mania. Finally, the temperamentalist is humor-themed and locked into one of the humor-related manias, with blast energy changed to associated energy types. I like the theme per se, but the execution could have used more to set it apart.

The pdf closes with 3 new magic items: Bassaris of heightened frenzy help unlocking mania powers slightly sooner; the kantharos of renewed ecstasy can at-will fill with wine, and 1/day enter a rave immediately. Maenad’s Thyros is a +1 club that 1/round channel the emotive blast through the weapon and enhance them.

Editing and formatting are, for the most part, very good on both a formal and rules language level. Layout adheres to Zenith games’ printer-friendly b/w-standard, with nice b/w-artworks, some of which I hadn’t seen before – nice! Annoyingly, the pdf comes without bookmarks, which constitutes a comfort detriment.

Unless I’m mistaken, this is the first design I’ve read by Gabriel Almer, and I was pretty positively surprised by it – perhaps it’s due to Jeff Gomez’ development, but as a whole? As a whole, this is a valid, interesting class that does a surprising amount of different things. Now, the class does have a few minor snafus in small components, yes. And yes, I am no fan of the untyped damage, but the psychic angle doe prevent undue abuse for the most part. While I wished it emphasized its maenad/bacchanalian angle more, this can be considered to be a success, particularly for a freshman offering – I can point towards several authors who did not attain this level of precision after several attempts. My most pronounced issue with the class is that it could do more with its sub-engines, and that some options are a bit trap-like, but yeah…then there’s the price point. This costs a grand total of a single buck. That’s insane, and the class is certainly worth picking up for the low price. Hence, my final verdict will clock in at 4 stars.

You can get this neat class for a single buck here!

If you enjoy my reviews, consider leaving a donation, or joining my patreon here!