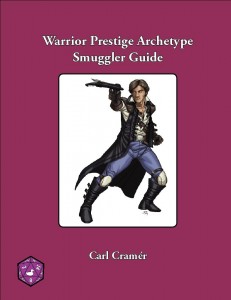 This pdf of the Warrior Prestige Archetype-series clocks in at 10 pages, 1 page front cover, 1 page editorial/introduction (explaining the base concept of the series), 1.5 pages SRD, leaving us with 6.5 pages of content, so let’s take a look!

What are Prestige Archetypes? Well, I reviewed the whole first series, so here’s the tl;dr-version: They are prestige classes blended with one (or more) base-class(es) to result in a new, 20-level-class – much like you had modified the base class with an archetype. Get it? Yeah, not a hard concept to grasp, is it? Now personally, I use Prestige Classes with an emphasis on the PRESTIGE-component, archetypes more like a career path, but this differs wildly from how PrCs are handled in most cases. Hence, e.g. the PA: Assassin from the first subscription was pretty much a godsend for my party and spawned the legendary “Assassins of Porphyra,” perhaps the best take on the assassin base class currently out there.

The Smuggler Guide as presented here gets full BAB-progression, d10, 6+Int skills, good Ref-and Will-saves and Wis-based prepared spellcasting at 4th level from the ranger’s spell-list. In case you haven’t figured this out on your own – this one would be based on the Bellflower Tiller, taking the pretty specific fluff of said class and making it more general – 3rd level nets the character the 1st favored community, with every 5 levels thereafter netting an additional one – these would be the adaptations of the favored barn ability of the base PrC.

At first level, the smuggler guide may designate a number of allies equal to 3+Wis-mod as part of his cell as a standard action. Members need to stay within 30 ft. of the guide to benefit from the class benefits. The smuggler guide may grant members of his cell a teamwork feat he knows – the targets do not need to be able to meet the prerequisites. 11th level extends this range to 60 ft., 13th level decreases the action it takes to a move action, 17th level increases the range to 90 ft. and 19th level allows for cell designation as a swift action. Usually, I’d complain here since, depending on the build, swift actions can be more valuable than move actions. However, the action economy-increase that goes swift is situated at a point where multiclassing is all but out of the question, so yeah -no issue. I really like how Bellflower Crop was expanded upon here and made more relevant. Additionally, smuggler guide receive a scaling cell defender bonus to atk and damage versus creatures that threaten his/her cell, beginning at +1 and scaling up by +1 at 5th level and every 5 levels thereafter. The scaling dispersal of this bonus is wider than the base PrC’s, but works well with the class established here – since we get full BAB with the smuggler guide.

Interesting would be an increased base speed and better overland speed for all members of a cell at 2nd level, where the class also gets the first bonus teamwork feat (+1 every 4 levels thereafter). The base ranger tricks like evasion, endurance, woodland stride, camouflage are situated, one and all, at levels where they are appropriate – kudos for that!

4th level allows for the defensive use of the scaling cell defender bonus via move actions or an animal companion. As a capstone, the class shares evasion, improved evasion and camouflage with the whole cell. Evasion and Improved Evasion may seem slightly redundant, though there are some obscure options to negate either, so I won’t complain here.

The pdf also provides solid FCOs for the core races – and sports sample builds of the class for level 1, 5, 10 and 15 – Saan Holo, a chaotic good human smuggler guide. Yeah, I had to smile as well. Even cooler, as a neat bonus, we get 3 sample settlements to use – with full statblocks – awesome!

This installment pretty much encapsulates the virtues of this series – it takes a overly specialized PrC and makes its concept work from first level on: Active ability with broad usefulness at 1st level? Check. Mathematically sound scaling and ability-dispersal? Check. Expanded focus? Check. Going one step further with a well written background for the sample NPC and sample settlements? Check. This is Carl Cramér at his best and you can’t expect more from such a pdf: It excels at what it sets out to do. My final verdict will clock in at 5 stars + seal of approval.