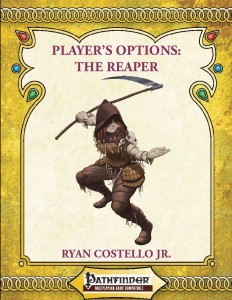 This new class clocks in at 8 pages, 1 page front cover, 1 page editorial, 1 page SRD, leaving us with 5 pages of content, so let’s take a look!

Reapers get d10, 2+Int skills per level, proficiency with all armors, simple and martial weapons, but no shields, full BAB-progression, good fort-saves and at 5th level, can cast Speak with the Dead as a SL 1/day, +1/day every 5 levels.

The reaper’s base ability is called “Reap”- whenever the reaper kills a foe or drops said foe below 0 hp, the reaper gets a soul fragment, which then powers the other class abilities. A reaper can store class levels + int-mod such fragments at a time and e.g. massive damage etc. result in more of these gained. Now the class does something smart – introduce a cap. Only creatures with HD equal or above class level AND Int over 3 can be used to generate soul fragments. *Puts away bag of kittens.* Yes, ladies and gentlemen – for once a class that uses such a mechanic and DOES NOT FAIL THE BAG O’ KITTENS TEST! And on this day Endzeitgeist rejoiceth…not for long. The class fails the “Hold still for a second”-test. What is that? Know who has equal or above HD as well? His adventuring buddies! Ring of fast healing or similar effects and there we go -one PC lets the reaper knock him down over and over again, instant unlimited soul fragments. *sigh* And that’s before soul mates (granted at 3rd level, +1 at 7th level and every 4 thereafter) – if those allies kill/drop foes the reaper also damaged, the reaper gets 1 soul fragment. This is problematic on so many levels. So soul mate allies take turns bashing the punching bag character, then the reaper (or an ally) downs it and BAM – more fragments! Also – this one does not have the HD-caveat, so here, kittens would apply potentially.

What do you do with these? At first level…nothing. Yeah, that’s not good design. At 2nd level and every even level thereafter, the reaper may select a Mors Opus from a list of almost 30 and work only as long as the reaper has a soul fragment. Some of the abilities require the expenditure of a soul fragment – “Mors opus marked with an asterisk (*) spend fragments, which a reaper may only do once per round.” – does this mean one soul fragment max per round or per ability? Don’t know and the ambiguity is not good, seeing that’s the central mechanic. These range from darkvision, being able to reap soulless creatures like constructs and elementals and even lifesense – though the latter costs fragments – 1 minute active per fragment.

More active powers include the option to spend up to int-mod fragments as a swift action to gain that amount as deflection bonus to AC or increasing CMB for trip by soul fragments spent. Weird here – the ability does not convey the benefits of improved trip, while the follow-up ability nets the reaper the trip monster quality. Yeah. That one should never be in regular PC hands, unless you plan to invalidate regular trip-chains. So structurally, these don’t make sense in the way they’re organized. Worse, that one doesn’t even require soul fragment expenditure any more, rendering the previous one completely moot. The sample holds true for similar tricks with grapple/the grab monster quality -ANOTHER quality PCs should NEVER EVER easily get.

Then things get broken – a reaper can learn to harm himself for 1d8 damage (why 1d8? How? Clawing/Scratching?) to get one temporary soul fragment as an immediate action. The “temporary” soul fragment has NO EXPIRATION set. Worse: This fails even the fast healing test – fast healing 1/regeneration 1 = infinite soul fragments! The reaper doesn’t have to bully his/her allies any more Yay! Kidding aside – broken, needs fixing. Also utterly ridiculous – gain soul fragments as a bonus to all saves versus negative energy/death effects. This can easily be +6 even at second level.

The reaper may also charge weapons with soul fragments for +1d6 precision damage per soul fragment used via one of these, up to int-mod at a time. 2nd level reaper, Int 18, +4d6 plus any other damage increases. OUCH. On the other hand, rays that deal 1d6 negative energy damage per 3 fragments and a range of 30 feet are NOT impressive.

Things become especially ridiculous once the reaper gets the ability to heal him/herself by spending soul fragments -for 1d8 hp. Reaper could hurt themselves, gain a soul fragment, heal themselves…it’s just a matter of stochastic that sooner or later, the reaper will end up fully healed (or dead), even sans the other tricks. Urgh. Learning the current hp of a creature within 120 feet as a swift action sans means of fooling is also broken on a narrative level and needs to die/get a save – dragon incognito? “What, the farmer has 367 hp???” Not gonna happen in my game.

Also kind of potentially problematic – for 2x spell level fragments, the reaper can cast a death spell (though he has to choose which upon taking the opus) as an arcane spell sans spell failure – I assume with int as governing attribute, but I’m not sure since the pdf fails to mention it. Oh, and then there is how easy and soon a reaper can thus cast high level spells – at level 2 a reaper could easily cast a level 3 spell. OUCH. Needs balancing.

13th level reapers get a permanent shaken-inducing gaze attack and truly high level reapers can make soul fragments crystallized and semi permanent – but as written, they’re not tied to the character and could be mass-produced for lower reapers – at least there’s nothing in the ability prohibiting it. As a capstone, the reaper gets a form that is incorporeal and has fly speed – underwhelming.
We also get 3 feats (extra opus, +1 soul reaped, +3 soul fragments useable only for one specific mors opus with cost) to nice spells (to prevent spawns and make people die faster) as well as an elven sample character.

Editing and formatting are very good, I didn’t notice any serious formal glitches. Layout adheres to PDG’s two-column b/w-standard and the pdf comes fully bookmarked for your convenience – nice at this length.

The reaper is a difficult concept to properly implement and author Ryan Costello Jr. tries to do it with flair – and generally, the wording, unlike the Ayuvatthan Monk, is tight. However, the reaper is a prime example for failed kitten-tests, failed resource management and a thus deeply flawed central mechanic that is one of the reasons this class fails in my book. The other being the too strong monster abilities that invalidate their own tree, the lack of level-restriction to balance the Mors Opus amongst themselves and the ridiculous self-healing/damage dealing flaws that constitute deadly design sins. My final verdict will clock in at 1.5 stars, rounded by a tiny margin up to 2 since the class may be a failure, but it is a valiant one that can inspire fixes and abilities.

You can get this class for its interesting ideas here on OBS and here on d20pfsrd.com’s shop.