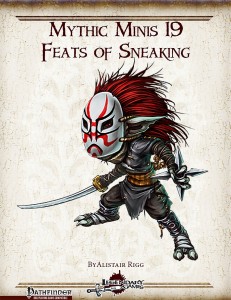 This time, we’re all about feats associated with sneaking after the first, awesome installment, so let’s check this out!

We open this mythic mini relatively conservative, with a mythic blinding sneak attack that can be powered by mythic power to keep the blindness (upgraded to the end of your next turn per default) last up to mythic tier rounds. Solid. Now “Dampen Presence” is interesting, allowing you to avoid lfesense, tremorsense (but not blindsight/sense as written…) and also allows you to use mythic power to treat stealth as a natural 20 – but only before the roll. The latter feels a bit too generic – not sure if that is supposed to work only for the senses mentioned by the feat – I *assume* so, but as written, this can be done in any context. If you have the mythic version of “go unnoticed”, you can be treated as invisible by those who fail to see you, whereas “shadow strike’s” mythic pendant allows you to inflict precision damage as if your target had no total concealment.

Now “Sneaking Precision” is very interesting – first it does not require an expenditure of a swift action to add critical effects from feats to your attacks. Secondly, it allows you to add these effects to regular hits via mythic power – a godsend for high-crit builds in that vein and rather strong, but an imho warranted power-upgrade for the respective builds in Mythic Adventures. “Stealth Synergy” (one of my group’s favorite teamwork feats, also gets a mythic version – though treating adjacent creatures as an aid another may be nice, it underwhelmed me hard in the context of Mythic Adventures.

The mythic version of “Strangler” upgrades damage dice to d8 AND allows you to forego extra damage to render the target unconscious on a failed save – nice one.

Finally, there is the 3-feat spanning “Moonlight Stalker” tree, which increases damage output (and crit multiplier up to potentially x6!), increases your feinting chances (with the option to use mythic power to get a natural 20…) and further increased miss-chance, with the addition of foes missing you counting as flat-footed.

Editing and formatting are top-notch, I didn’t notice any significant glitches. Layout adheres to Legendary Games’ 2-column full-color standard and the pdf has no bookmarks, but needs none at this length.

Alistair Rigg is in charge of this Mythic Mini, and he does a fine job – while not all of the feats wowed me and most fall into the formula of faster, better, etc., they generally can’t be considered bad and here and there have small components that deviate in a positive manner from simple numerical progressions/mythic power enhancements. As such, this pdf can be considered a good purchase and receives a solid final verdict of 4 stars.